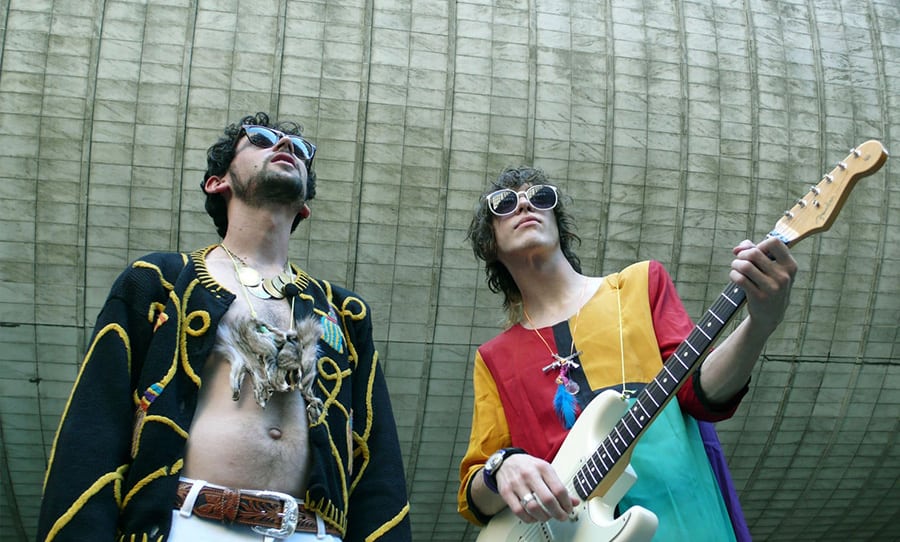 Oracular Spectacular by MGMT was one of the leading records of the noughties indie wave. Take a look at how it was crafted in Dave Fridmann’s remote studio.

In 2002, freshmen Ben Goldwasser and Andrew Vanwyngarden met at a university in Connecticut and formed what we now know to be MGMT, driven by no other ambition than “hanging out” and experimenting.

With Vanwyngarden on drums and Goldwasser messing around with synths, the duo occupied the latter’s dorm room and recorded said experiments on a laptop Reason app (although Apple Logic was reportedly a player too) for the sheer fun of it. Said fun led to the release of two EPs (respectively birthing smash hits Kids and Time to Pretend), which then led to a pleasantly unexpected phone call from Columbia Records. Following the signing of contracts, the band were then given all of 21 days to create their major label full-length debut. For this, they procured the help of prolific rock producer Dave Fridmann (Mercury Rev, The Flaming Lips, Tame Impala), who embraced their sugary psychedelic compositions wholeheartedly.

Recording sessions took place largely at Fridmann’s own Tarbox Studios out in the woods somewhere in remote New York, which was just the kind of laidback locale suited to MGMT’s creative process (Vanwyngarden: “We were shooting BB guns in between recording and eating a lot of pizza and chicken fingers, and it kind of just felt like fun times”). The rural studio, designed (in)expertly by Fridmann himself, turned out to be just the fit for MGMT’s lowkey, synth-driven approach.

Although the duo may have begun writing pop songs, in their own words, “kind of as a joke,” being backed by a mainstream record company propelled the two to stop being ironic musicians – and be musicians, period. To that end, Fridmann seized on the band’s tongue-in-cheek beginnings and elevated them to simultaneous commercial and critical rapture, creating together the tour-de-force of Oracular Spectacular.

According to the MGMT members themselves, much of the creative success of Oracular Spectacular happened virtually by accident as a result of piecing together various disparate ideas, rather than following any semblance of a plan.

On the songwriting process, Goldwasser once explained that “writing songs as a band and learning about production techniques go hand in hand.” This spontaneity-driven approach enabled the two to adapt to new processes and seize on unexpected ideas, much to their first album’s benefit.

The final result was a seamless fusion of retro art-rock and modern psychedelic electronica. Beset with the deadline they had, Oracular Spectacular made the absolute most of the band’s hasty lo-fi recordings that, in the expert hands of Fridmann, were mixed to a master-class of distortion that defines the entire record.

To achieve said heights of distortion, Fridmann reportedly assaulted tracks with substandard compressors from the ‘90s (the identities of which are, sadly, unknown). The outcome of such sonic pulverisation was mixed, the sound became noticeably over-compressed, somehow, in a good way – or as Vanwyngarden put it, “loud, but not bad.”

On the unusual mixing choices of the album, Galdwasser told Rolling Stone: “We redid a lot of our songs that sounded too polished. Dave ended up running our tracks through this thing that crushed them and made them sound really gross again. They’re a lot better now!”

Being as pressed for time as they were, MGMT drew upon old drum tracks for much of the album’s material. According to Vanwyngarden, Fridmann happily embraced “the challenge of using drums recorded with a RadioShack mic and putting them on a major-label release.”

Perhaps the most interesting example of said rhythmic meticulousness is Time to Pretend, which was adapted from their 2005 EP of the same name and re-recorded with live drums for Oracular Spectacular.

At Fridmann’s suggestion, the song’s BPM was increased slightly, just enough to show off a droll disco influence – as Goldwasser revealed: “We wanted it to be the exact tempo of Dancing Queen by Abba, which it is!”

After getting signed to Columbia, there was no greater signification of MGMT’s major-label accomplishment than the complete makeover of vocals, which were transformed by Fridmann into a piercing identifier of the band.

To compare the album’s version of Kids with its original release, the fidelity of the vocals was clearly upgraded – Fridmann is known to favour the Neumann U47, which is likely to have contributed to album’s pristine shimmering vox.

This, in addition to the mastering emphasising the top end, played its part in the particular high-pitched character of Vanwyngarden’s vocals, even taking into account the fact of the song’s key actually being taken down a semitone (causing less of a strain for the untrained vocalist).

Following re-recording of vocals was a plethora of processing, from filters to effects (including a Universal Audio AKG BX20 spring reverb), to manifold doubling and compression. Meanwhile, background vocals and harmonies were treated in an understated fashion, placed low in the mix and panned widely (said harmonies have been capitalised on in many a cover.)

Oracular Spectacular is a celestial city of synthesis, achieved with a variety including but not limited to a Nord Stage 2, Yamaha Dx7 FM, and a Korg Mono/Poly. The latter became a staple for MGMT while recording demos in Atlanta, and can be heard in the arpeggiated intro of Electric Feel among others.

Both hit singles Kids and Time to Pretend underwent transformations for Oracular Spectacular, synth-wise: increased amp gain, compression, and – you guessed it – distortion. Notably, the album version of Time to Pretend retained the college-era analog-ish synth sounds on the version from the EP of the same title, which was reproduced by Fridmann with a thousand times more crunch!

An intriguing trait of MGMT’s compositional style is a reliance on monophony as a result of either the limitations of their early-days synthesisers or a lack of classical training. Whatever the reason, the lack of complex chords and harmonies in album highlights like Kids actually did wonders for the mix in allowing plenty of space for each voice.

This principle of minimalism also benefited the bass sections of songs like Time to Pretend, which chugs along on solely on a low-voiced synth – with oodles of sustain, resonance, and low-frequency distortion to reduce treble – in place of a bass line proper.

In that respect, the album’s synthesis choices were designed to provide a clear separation of frequencies – triangle waves for melodic hooks, sawteeth for the rhythmic low ends, etc. Not only that, but this clear isolation of sound also extends to the relationship between bass synths and the kick drum, with the upper frequencies of the latter being emphasised so that the bass hook alone occupies the song’s lower end.

All of the above contributed to the striking sonic character of Oracular Spectacular, from Time to Pretend to Future Reflections, the album boasts both weird over-processed crunch and pristine clarity in equal measure, two traits MGMT would carry on into the future, albeit with an emphasis on the weird.