Oracular Spectacular, when MGMT discovered the tune of their own humanism
Skip to content
[gtranslate]
DA MGMT hit the pop culture landscape hard with their full-length debut Oracular Spectacular. The album’s unique, neo-psychedelic soundscape was near inescapable throughout 2008 with singles appearing across television series and commercials, film and even the occasional video game.

Its progenitors, Andrew Vanwyngarden and Ben Goldwasser, were launched into the ether of rock ‘n’ roll stardom, a lifestyle that the album criticised sardonically. It resonated emphatically amongst late naughties youth culture through its party-friendly, anthemic hooks and lyricism, which expressed themes akin to a 1960s neo-spiritualism. 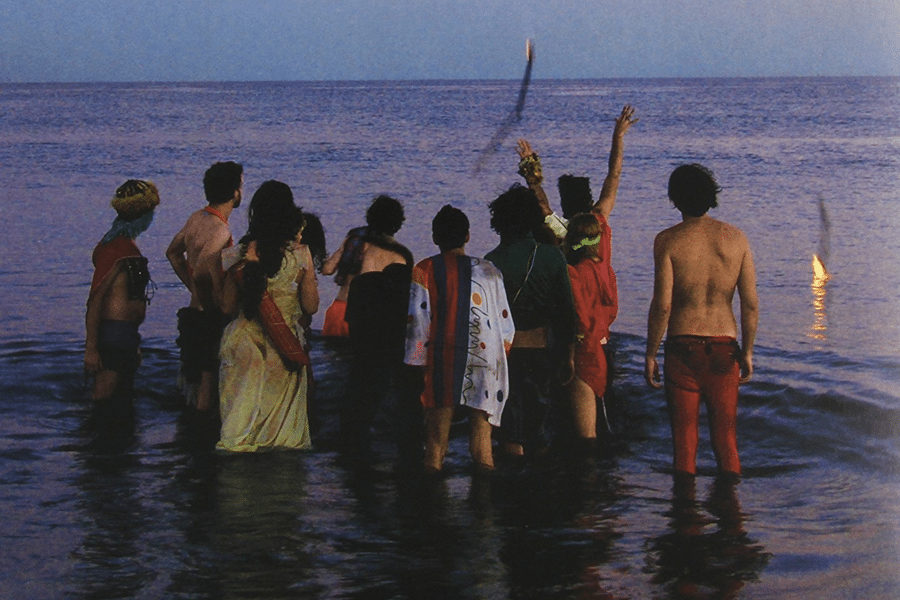 Tossing pop sensibilities in with a fervent distaste for the genre’s vices, MGMT were simultaneously preachers and aggravators on their groundbreaking debut Oracular Spectacular.

The irony of the rise of MGMT lies in their conception as a mock rock ‘n’ roll band, conceived in 2002 at the American liberal arts college, Wesleyan University. Performances were in sweaty college dorms turned performance spaces, half-packed with drunken freshman bouncing about the room as Vanwyngarden and Goldwasser would discharge fervently atop pre-recorded tracks from a laptop.

Boisterous yelling and the occasional hook – tunes like Boogie Down were seemingly innocent exercises in the joy of noise-making, designed to manifest an air of intense, jubilant abandon.

In their early years they were called The Management, and performances such as the latter were common according to Vanwyngarden: “…that was the whole shtick of the band in College. We’d be playing in someone’s living room and wearing fur coats and drinking champagne and acting like fools”.

In spite of the duo’s heedlessness they still produced music that was anything but artless. In 2005 Columbia Records, having gotten hold of their first EP Time to Pretend, heard the first demo of Kids and began talks to lock the unsuspecting duo into an exorbitant six-figure contract.

The Management had nearly dissipated when talks with Columbia Records began. Both Goldwasser and Vanwyngarden were pursuing more legitimate, adult-level ambitions since their rock ‘n’ roll parody had grown tiresome.

Evidently, an accord was reached and the pair signed with Columbia in 2006 and preceded to enlist Flaming Lips producer David Fridmann.

Listening to the first demo of Kids it’s easy to hear its pop potential. Compositionally mature and simplistic, yet ultimately lacking in terms of production and sound quality. What Fridmann brought to the duo was an advanced production knowledge spanning multiple genres and artists; Fridmann was a producer who could direct a sound to its penultimate form.

With monetary backing and the prospect of a broad audience MGMT began considering how to conflate their musical influences – Talking Heads, The Flaming Lips, Lou Reed, The Rolling Stones, Brian Eno – into compositions that were serious.

Fridmann gave the album’s vocals a crystalline and pure sound quality, as well as distorting and over-compressing the vast array of synthesisers featured throughout the recprd. This unique production approach helped re-energize and distinguish the duo’s songwriting, in turn pushing the boundaries of how pop music could sound.

Lead single Kids presented a synth-rich lament for the inevitable disintegration of child-like innocence, resulting in an almost carpe diem for those on the cusp of adulthood. The song was immersive and nostalgic; opening with sounds of children laughing and playing before segueing into an inescapably memorable synth melody.

The tunes supporting synths were steeped in fuzz and boomed the way they might through a subwoofer or drink-stand at a house party in Anywhere Town, USA.

On follow-up single Electric Feel, MGMT revealed their penchant for things retro, featuring punchy bass and a disco groove reminiscent of The Bee Gees. The album’s surrealist lyricism seemed to push the parameters of the pop song, while simultaneously its production and arrangement capitalised on that which made the pop song such a lucrative art form.

Perhaps more anthemic than the leading singles was Time to Pretend, aptly dubbed the “freakbeat theme for the Skins generation” by The Guardian. The song sings sardonically of rock ‘n’ roll’s base excesses, championing drugs, screwing models, and dying young as an alternative to a wearisome and drone-like adulthood.

Time to Pretend became emblematic for a generation of disenchanted youths wanting to escape life’s boring determinism. The instrumentation is, again, a joy. Warbling, distorted synths swim beneath alien-sounding vocals with each instrument as appealing in timbre as it is in melody. Despite the song’s wry lyricism, it’s genuine and poignant, the assurance of the common substandard adulthood a cause for respite.

Oracular Spectacular is a gem because it so perfectly balances the group’s beloved pop-sensibility with the experimental avant-garde conceptuality that has made their work genre-defying and noteworthy. The album’s first half is generally characterised as a collection of pristine pop; its second half subverts their pop sound almost entirely.

MGMT show off their artfulness in moments like these, revealing they’re more complex than the pop form can dictate. The track’s primal drumming is a far-cry from the elementary melodies, rhythms and structure found in Kids.

Future Reflections is a strong anti-pop statement of cerebral psychedelia. Arguably the album’s most contrasting and dramatic cut, it opens with dissonant fanfare and rattling percussion, concluding with an impassioned outro of spirited proportion. Despite the album’s consistent engagement with the ironic, it concludes on an evolved and sincere and direct sentiment: “…but as long as you feel it, I’m a believer.”

Here MGMT’s neo-spiritualism takes final form as a modern humanism that situates experience, not preordained belief or bureaucracy, as the most reliable mode of faith. As MGMT discovered the tune of their own humanism they would subsequently venture further away from pop idioms into more abstract and nuanced experimentalism.

Nonetheless, Oracular Spectacular remains one of the most lauded and cherished albums of the last decade. Deadly hepatitis outbreak in healthy kids has spread through the world