I saw Winston Surfshirt for the first time in a converted underground public toilet beneath a park somewhere in East London in 2013. Back then it was just a solo act, with Winston himself crouched over a bunch of loop pedals in a pretty mind-blowing display of musicianship, looping beats made from his guitar and his mouth, blending elements of hip hop, funk and psychedelia into an intoxicating aural potion.

Fast-forward two years and Winston has made it back to his home, the Northern Beaches of Sydney, where he, alongside his expanded band, have developed a ballistic cult following with a bunch of EPs under their belt and an album on the way. We are stoked to present part one of Live At Moonshine, a two part series covering one sultry gig  in Manly, featuring a mind-blowing aural melee as Sydney’s Winston Surfshirt tear the house down.

The band as we now know it consists of frontman Winston, who writes the tunes, Mi K & Bik Julio who play bass, and two producers Bustlip, and Dool and The Bone. Their live show is a sweaty melange of spiky vocals, slinky, funk addled bass and beats, and smooth horns. They have steadily built a massive fan base around their tireless attitude to playing live: give us dark corner and some people, and we will play. The first installment of Live At Moonshine features a bunch of track from the band’s forthcoming debut LP Sponge Cake, plus the sultry Everybody’s Staying In from Sticky Date, Surfshirt’s first collaborative EP.

Sit back and hang your head because you weren’t there, it was pretty wild. 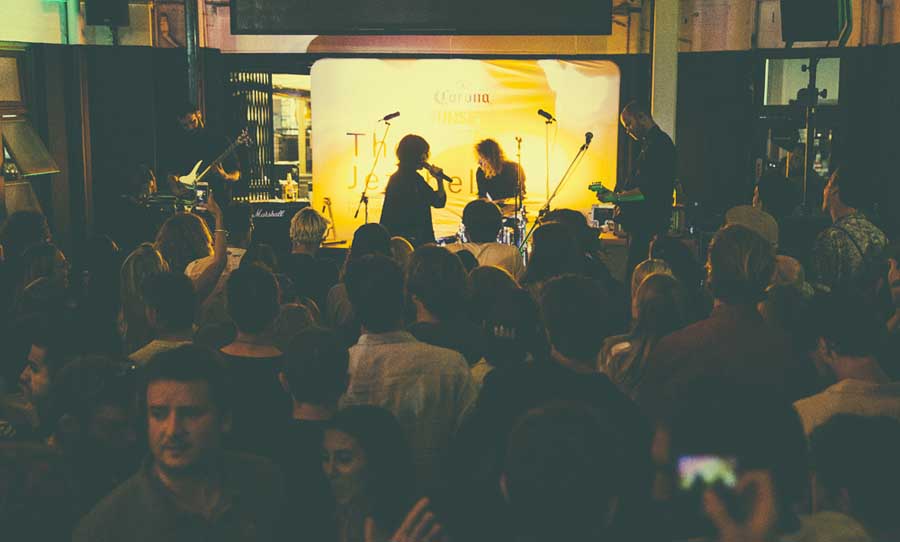 The Jezabels at Hotel Steyne: a career spanning set from Australia's finest