Frippertronics: Ambient tape looping brought to you by Robert Fripp and Brian Eno. It might not sound new, but in 1972 it was.

Frippertronics … What did you just say?

Frippertronics is a tape looping method popularised by guitar virtuoso Robert Fripp. Looping may not seem like a new idea – you’re likely to find a loop pedal under the foot of most street buskers. However, in 1972, the musical world had never seen anything quite like it. 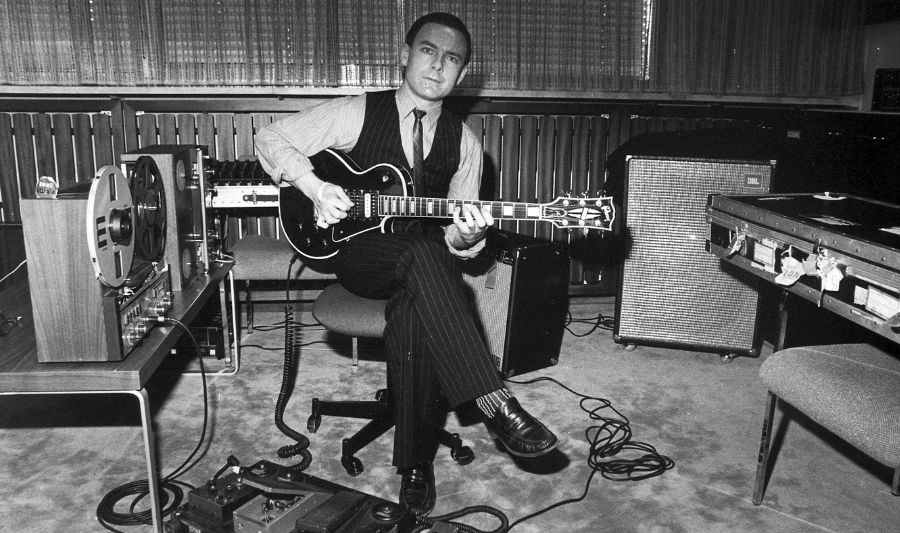 The Father of Frippertronics

Best known as a founding member of the progressive rock band King Crimson, Robert Fripp was never one to shy away from experimentation throughout his career.

Where his days with King Crimson were defined by blistering time signatures and deranged key changes. Fripp’s solo work centred around novel studio practises like the Frippertronics we’re delving into.

Notably, even contributing sounds to the Windows Vista operating system.

Perhaps most fruitful of these pairings was his work with Brian Eno. Eno in the early 1970s was transitioning away from his glam project Roxy Music to pursue his own experimental career.

In September of 1972, the pair met in Eno’s London home studio, where he had set up a tape system developed by avant-garde composers Terry Riley and Pauline Oliveros.

The record head on the first Revox tape deck was routed to the playback head on the second deck, which then ran back to the first deck.

The result of this constant recording and playing was a delay loop, the length of which (usually 3-6 seconds), depended on the distance between the tape decks.

During the session, Fripp played the guitar over Eno’s loops, which were either selected for looping or bypassed.

This allowed Fripp to add to the established loop or solo over what was essentially a backing track. By nature of the design, the session was recorded on a master tape on the first machine.

The recycled delay would decay slightly on each return, giving it a characteristic, not unlike tape delays of the day such as the Echoplex or Space Echo.

However, the longer reels of the tape recorders allowed for a longer delay time.

The result was a mesmerising ambient drone; an aural depiction of an artist continually layering paint.

Eno and Fripp’s sessions resulted in the 1973 album, No Pussyfooting, a stream of haunting loops that many consider being one of the pioneering ambient albums.

The duo reunited in 1974 to produce Evening Star. Taking the idea further with Fripp’s meandering guitar hooks and lush soundscapes, formed from Eno’s layering of piano and synthesiser.

Around the same time, Eno produced the album Discreet Music. This work used a lot of looping and would set the scene for his later ambient releases such as Ambient 1: Music for Airports.

Fripp and Eno embarked on a short European tour in 1975, displaying their unique sound.

The pair toured with their tape rig, with Eno frequently using his EMS Synthi AKS (an early portable synth) and Fripp using a fuzzed-out Les Paul run through Hiwatt amplifiers.

The pair would be seen together on works such as David Bowie’s Heroes, however would not release another album together for another 30 years.

Robert Fripp continued to develop the looping method, creating a more ergonomic version that he could use to perform solo. This was the term ‘Frippertronics’ was coined by his then-girlfriend, the poet Joanna Walton.

He went on to work with Peter Gabriel, adding ambient textures to the ex-Genesis frontman’s second album. Exposure, Fripp’s first solo album, was released in 1979 and his Frippertronics tour followed the next year.

Fripp developed offshoots for his technology – “applied Frippertronics” for rock settings. Even delving into dance with “discotronics” or looping with a disco beat, and “pure Frippertronics” (no overdubs, original session tape).

He continued to use the reel-to-reel method throughout his career. Dabbling in digital loopers and delays, resulting in his 1990s ‘soundscapes’.

Digital looping stations were clearer, more practical and able to loop whole verses. However, they lacked the sense of warmth and spontaneity that the original tape machine technique possessed.

For an aspiring ambient guitarist, however, there exist many modern digital recreations of tape delays such as the Strymon El Capistan and the Boss-RE20, which allow the player to stretch the delay time into ‘Frippertronic’ lengths.

While on the other hand, some looping pedals include wow and flutter options, both of which get close to Fripp’s ambient magic without the need to lug one’s body weight in tape decks.