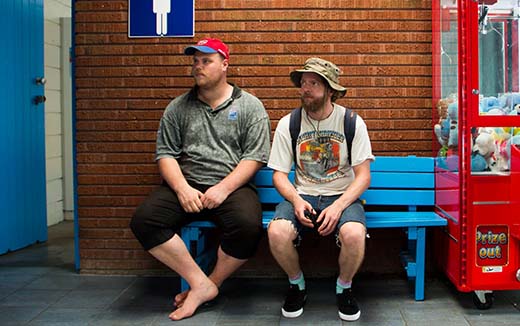 Is it any surprise that YouTube has become the leading source for music streaming? For all the fuss Spotify, TIDAL and the like get, it’s everyone’s favourite video host that sees music fans from across the globe scouring it’s archives for the best music, both new and old. In a lot of ways a good music video that can capture the eye can be more important than the actual song. So the question has to be asked, how does one make a totally boos music video? We decided to ask a pair of experts who could probably make a good music video in their sleep. We’re of course talking about Kiwi directing duo THUNDERLIPS.

The dynamic duo of Sean Wallace and Jordan Dodson are based in Auckland, and have an impressive list of music videos to their name. Such creativity is is brought on by “Drinking scotch for breakfast and using hot sauce as eye drops.” Given how badass and versatile their clips are we’ll take their word on that. With THUNDERLIPS’ prolific back catalogue, who better than to teach a masterclass on making a dynamite music video? Keen to learn how to make a visually orgasmic music video? THUNDERLIPS is the name on the blackboard and class is in session. Take notes nerds.

We live by the mantra that you can only make a truly incredible music video for an incredible song. That’s probably why most of the music videos we make are for unsigned geniuses. Because, y’know, record companies on the whole have no taste.

By the time we can say to anyone outside of THUNDERLIPS, “This is the concept,” the idea has been pitched, ditched, changed, distilled, fan-baked, doubted, re-pitched and mixed with monkey blood. Because there’s two of us, there’s always someone to say your idea sucks.

Follow your idea through to the hilt. If your video is set in the world of 90s sit-coms, eat, sleep and breathe 90s sitcoms. Find out how they made them, what cameras they were shot on, what the drugs the writers took. Let every creative decision you make be informed by the theme(s) of the video you’re making.

If things go tits-up, don’t compromise. Things will always go tits-up, you just have to come up with another way of doing it that’s as-good or better.

The important thing in life is Courage.