In 2004 Ed Droste convened a group of four likeminded eccentrics to follow on from the success of bedroom recording Horn of Plenty. Instinctually skirting the borders of indie rock, classical music, and folk, Grizzly Bear have been chasing their wayward vision ever since. The Brooklyn outfit’s moody evocations may be embolic of the indie era but they’re beholden to an age-old idealism. With each new album comes an improvement, change or challenge of what’s come before.

2017’s Painted Ruins arrived in direct contrast. It leaned back into the subdued and brooding element of the four’s signature sound. Grizzly’s pastoral and slow-burning seventh scattered expectation to the four winds.

With a little over half a dozen albums under the belt, the suggestion that Grizzly might be heading down the path of a ‘Golden Oldies Band’ slips off of the tongue. No sooner does it slide out, is it accompanied by the realisation that Daniel Rossen is sitting on the other end of the line. As a driving force within one of the most uncompromisingly creative outfits to pierce the popular consciousness in the last decade, he would be well within his rights to take the comment as a little pointed.

I back-pedal. Of course, the band is still a decade or two away. Surely! But Rossen takes the proposition in good measure. In fact, ego doesn’t play into it at all. He finds it amusing. Grizzly aren’t there yet, Dan assures without missing a beat, although he can’t help but confess to having enjoyed the reworking of older pre-Shields material in preparation for their upcoming Australian shows.

He’s in high spirits. Genuine excitement spills from his voice when it comes to reigniting the group. 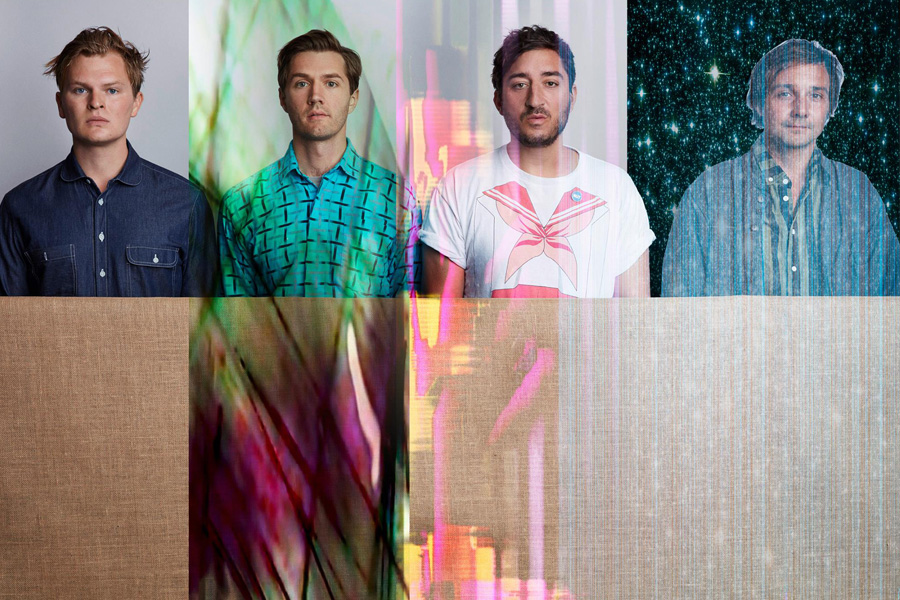 On the recording front, there’s solo material in the works for Daniel Rossen. As for the future of Grizzly Bear? In a group like his, you never can tell.

HAPPY: I was reading an interview with the band from a few years back where Ed was discussing how Grizzly Bear started off terrified at the prospect of playing live and still were. How are you feeling at the outset of 2018?

DAN: (laughs) Well yeah, we’re pretty comfortable these days. When we first started playing Chris [Bear] and Chris [Taylor] were pretty experienced playing live actually. I had done a little bit, but neither Ed [Droste] or I were very comfortable at all. There was a lot of staring at the floor! But now? Now it’s fun. It’s a great challenge to keep honing in and to keep improving.

HAPPY: You and Chris Bear met prior to joining the band at a high school jazz camp. Tell me a little bit about this relationship with jazz. Is there an element of it which still feeds through into your work with Grizzly or have you moved past it?

DAN: No, I think it’s still very much there, at least for three of us. Chris, Chris and I all grew up playing and studying jazz and classical. I really did not expect to be a professional musician at all! I really came to it – in my mind I was just like a real enthusiast of music. I liked all different kinds of things, just gradually, through appreciating and loving music. I transitioned into writing in this weird way I didn’t really expect.

I don’t know, I try to keep that in mind always. I guess I kind of got off topic there! In any case, my roots are still in classical and jazz. I think about harmony and chord writing and structure in that way. But there’s no delineation for me. It’s not like these are rock songs and these aren’t or any of those things. I just kind of like to let it all in. I think the same is probably true for the other guys too.

HAPPY: You started off as more of a musical hobbyist, how are you approaching your songwriting now that Grizzly Bear is such a big part of your life?

DAN: Honestly, it’s been changing with every record. The way we went about Painted Ruins was very different from Shields in terms of writing and writing duties. There was a long period in between these two records. I worked on a bunch of other stuff, some of it I’m still working on, some of it I threw away.

I try to reserve songs for the band which are very open-ended, I often try to avoid singing on them too early so they’re open enough for everybody to try… anything! We’re trying to be more and more collaborative every time, bring everybody closer in. That was a major part of this record, just trying to make sure everybody’s happy! But it’s different every time.

HAPPY: Painted Ruins hits me with the impression of an album in the truest sense of the word. It doesn’t seem driven along by a big high energy moment like Two Weeks or Yet Again. Where was your mind at when you were recording?

DAN: Well you know it was a long process. I was living in a very rural, very remote part of upstate New York – I moved out of the city in about 2013. So the whole time we were writing that was kind of where I was. There’s a fair amount of reference to the country, at least in my contributions to the record. I think everybody, especially on this one, was coming at this record from such different places. We didn’t really think about connecting the dots too much, certainly not while we were making the record. We never necessarily do!

But certainly, when we make an album it’s always with the idea of it being an album, being consumed as a full set of songs. To me I often like it when there are little links between different tunes, things like different instrumental figures or different lyrics which factor into certain songs. Like it’s one big narrative that you’re trying to digest or just sort of work out. Having certain things working their way throughout the record. There’s a couple of things like that on Painted Ruins.

HAPPY: Figuring out what songs people will respond to from an album seems to be a bit of a tricky task. Do you ever have a feeling that a song will be something people respond to when you’re putting it together?

DAN: I mean sometimes we have a sense when we’re making a record which is like “Well this can be treated like a single.” Generally speaking, I try to avoid writing something like that. It’s definitely not my forte! But I think even when we know that might be happening with the song, we tend not to really think about it that way. We just approach it as music, like anything else the record.

But you never know! You never know what resonates. It’s like you just kinda hope for the best and, as much as we can, make sure all of us in the band are happy with what we’re doing.

HAPPY: Are there ever recorded songs you have thought would absolutely knock people over live but haven’t?

DAN: Oh yeah, yeah. Totally, I mean that always happens. There are songs from previous records I thought I loved, but then we started playing them live and I realised I didn’t particularly like them very much at all! Even things of my own, you never know how things are going to translate live.

For the most part, this record’s been working OK. But there are songs on the record we like but know don’t work live. It’s true of almost every record. Sometimes its best just leaving them in their album form.

HAPPY: Painted Ruins also marks another transition for the group. Grizzly Bear have moved from their traditional home at Warp Records to Sony label RCA. Has there been an added pressure when making the album?

DAN: Hmm, that was a choice made for a bunch of different reasons by a bunch of different people y’know? I don’t think RCA or Sony had any super high expectations for us to do anything other than what we always do. That said I’m sure there was some hope or something that maybe it would be a different situation.

HAPPY: Over the last decade Grizzly Bear have amassed this huge back catalogue of songs. How are the group rounding out the set for these upcoming shows?

DAN: We try to cover all of the records. We still really enjoy playing a lot of the old songs. Since every record is of a different quality anyway it’s kind of nice to have that variety in the set so it doesn’t feel like just the one experience. There’s a fair amount of new tunes, but it’s definitely not only the new tunes.

HAPPY: Is that a tough decision? I know sometimes you can get to a stage with a band – you guys are still another decade or two away from here I’m sure – where they either branch off into either a Golden Oldies territory or keep forging ahead whether an audience is following or not…

DAN: We try not to do that. I guess with the last record the set was kinda dominated by Shields tunes I suppose, but I think this time around, especially since we haven’t played in so long, it just feels like that when audiences come to see you, you should respect the track they probably want to hear.

They don’t want to hear just any record you know? For us too, because it’s been so long it’s been really fun to revisit a lot of these songs. We’ve been picking out some really old ones and turning them into a new form when reintroducing them into the set. I still really enjoy playing the old tunes! I don’t know if we’re exactly a Golden Oldies band, but we’re somewhere in-between that’s for sure!

HAPPY: These shows you will be playing in Australia are going to be more of a sit-down experience. Do you approach performance differently to appearing at a festival?

DAN: We tend to prefer the rock show mode these days. A lot of our songs, especially when we do them live, are a lot more bombastic now. Certainly with festivals we try and keep it up as much as we can. But no, we like to treat all of our shows as fun and wild rock shows to be honest. It’s probably what to expect!

HAPPY: Just a quick final question. You’ve recorded this huge album and obviously you’re touring it too. What else is coming down the road?