Another day, another excellent Aussie psych-rock band. Ruth Carp and the Fish Heads (pause for a second to appreciate that name) have done it a bit differently, throwing what they deem a dose of ‘heroin chic’ into the mix, making for an excellent hybrid of psych and grunge on their latest recording, It’s This Or the Noose. An intricate and involving mix of psych and grunge, Sydney bunch Ruth Carp and the Fish Heads combine rock icons of yesteryear in a mix they’d be proud of.

Opening track Happiness is basically an ode to drinking (“Happiness is going to start today / Haven’t had a drink since the start of the week / I’m about to get washed away”), sex (“Haven’t seen a girl since I don’t know when / I’m about to get lucky and laid”) and the sun (“Haven’t seen the sun since I don’t know when / I’m about to feel it’s warming rays”). The track perfectly encapsulates the mix of grunge and psych, with drawling vocals that would make Kurt Cobain wonder who’d stolen his voice box, and the layered dynamism we’ve come to expect from all our favourite psych rock bands.

Second track High Fidelity is the group’s first single, and sounds as down-and-dirty as its Nick Hornby novel-inspired title would suggest. The opening guitar riff seriously sounds like something straight out of In Utero. Its dreamy chorus, sharp rhythm guitar section and reverb-ey vocals make it an immediate ear-worm.

Something About Something is one of my favourite song titles in a while. Oh, and it’s a pretty ripper song too – opposite in lyrical themes to Happiness. The instrumentals on this one are classic straight up rock, but what’s really key here are the vocals. Intricate in its simplicity, the lyrics weave in and out of one another: “My dad said you’ll never have fun if you’re always run on the run /and I’m always on the run /so I’m never having fun“.

Jimmy is a great little tune about a guy called Jimmy. It’s almost folky in the way it weaves its narratives, and is a nice counterpoint to other, harder grunge tunes. Better Red Than Dead actually sounds as though it’s going to burst into some full-on Beach Boys-esque a cappella harmonies from the sounds of the opening. Instead, it is a straight-up rock tune, and one of the best songs on this record. It’s a little like if Kings of Leon had babies with Pearl Jam. In a good way. I almost got up from my desk and danced. Almost.

Final track Country Pubs does somehow evoke the sleepy haziness of a summer afternoon spent drinking at the pub. A little less cohesive than the other songs, it really lives up to the band’s description of the an “album full of songs written during long drunken walks home from the pub. Ride the psych ups, groggy downs and general substance abuse.”

Overall, It’s This Or The Noose is a brilliant effort from Ruth Carp and the Fish Heads, straddling the line between grunge, psych and traditional rock quite creatively through their varied instrumentation and vocalist Ruth Carp’s clearly early-nineties-inspired lyrics. 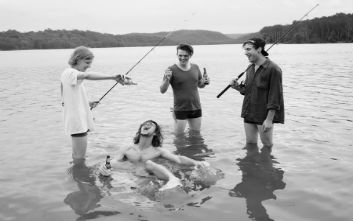