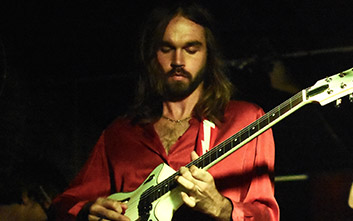 Miss The Ruminaters as they smashed out their Sydney show? Catch our tales and pics from the deranged gig here.

Last week The Ruminaters stopped by Manly’s Moonshine Bar as part of their Summer Vacation tour. If you’ve ever seen these guys live, I don’t need to mention the fact that they put on one hell of a show, but if you have never been lucky enough to see the outfit thrash around the stage, it’s probably something you’ll want to put on your to-do list.

The entire room was completely packed, and as soon as the boys hit the stage, bodies started flying. Within about two minutes the mosh was in full swing.

The band’s frontman Pencil is impossible to take your eyes off, not standing still for more than two seconds, constantly scattered across the stage in a destructive flurry. All you really can see is the seemingly impossible guitar playing and his mop of silky hair…it really is pretty impressive to watch.

Dropping tunes like Mr Bubbles, A Sing For Dandelion, Psychopathic Brain Explosion and Bad Bad Things, their newest music definitely has more of an intense, hard hitting psych rock sound, and really packs a punch in a live setting.

The energy from the band teamed with their fast-paced and jittery sound reverberated throughout the whole bar, with not one person standing still. Considering the intimate nature of the venue, I was expecting the crowd to be a whole lot tamer than it was.

I guess I was wrong about what The Ruminaters’ music does to people. PREMIERE: The Ruminaters' Mr. Bubbles is an adventure to an underwater universe