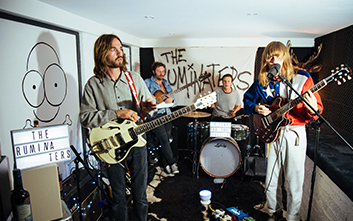 In our modern age, less and less is left to the imagination with constant discoveries taking place, ruining our chance to muse and fabricate our own truths to these mysteries. Some anomolies however, may never be untangled. For instance, who will ever know what goes down in the depths of the sea while no one is watching? Are our fishy friends simply wearing a facade of idle innocence and brainlessness or is there more to their lives away from our prying eyes? Garage legends, The Ruminaters are back with Mr Bubbles, a cheery underwater adventure complete with catchy hooks, shimmering guitars and some cheeky lyrics.

Thank God The Ruminaters are here to ease our throbbing minds with their own underwater tale in their new single, Mr Bubbles. The Sydney garage legends are at it again, this time seemingly drawing inspiration from a Spongebob-esque world of underwater characters, with a slightly more adult-influenced story line.

In their own words, the catchy singalong is the tale of “a young gentleman who accidentally falls asleep underwater, only to find himself making friends with a whole town a crazy sea town folk“. Fair enough. Our beloved Rumies are true to their word, however and manage to paint a vivid image on the walls within our brains that tantalises in its absurdity and is addictive in its catchy hooks.

The track kicks off with calming acoustic strumming and candy sweet guitar triads sliding to and fro before the introduction of bouncing drums and lazy bass lines. Mr. Bubbles supplies all the tastiest morsels of a pop track but with the spicy seasoning of a garage mentality, not to mention some cheeky lyricism.

There is an inherent maturity in the use of light and shade when its effective and, Mr. Bubbles brings it in perfect amounts. The layered vocals in the chorus and shimmering guitar tones sound like baby blue bubbles floating gently around your hear, kissing you a final time before bursting like uncontrollable laughter.

Showing a more story based, acoustic side of their musicianship proves to be a brilliant step for our favourite Sydney scallywags and could attract a whole new pack of listeners. The Ruminaters’ new track is reminiscent of The Rolling Stones‘ forays into country-folk territory in the 70’s and fills us full with almost nursery rhyme sing-alongs in the repeated chorus hook.

The four piece even manage to squeeze in some psych to add a unique oscillation to the otherwise minimal jam. Upon third, fourth and fifth listen, it becomes apparent that Mr. Bubbles doesn’t go away once you’re pierced by its hooks and reels you in every time, joyous and kind in its easy flow.

The lads are set to embark on an East Coast tour in support of Mr. Bubbles before heading out on their first ever UK/European dates later in the year.