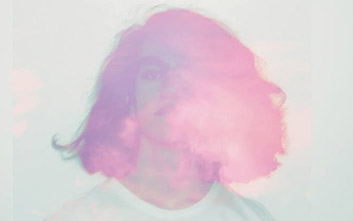 The Adelaide bedroom producer Sione Teumohenga, known by his stage moniker Lonelyspeck, is set to release his sophomore EP Lave on March 3rd. It’s a brave and unchaperoned voyage into exciting new electronica, and one we couldn’t be happier about.

Teumohenga was right to follow his singular instincts, exclusivity outplaying collaboration to yield an atmospheric and reverberating EP that showcases a confident producer comfortable with experimental sound. The genre-melding Lave EP from Lonelyspeck portrays a kaleidoscope of sound layering, finding the intricate balance between alt-pop and ambient listening.

Lonelyspeck’s name is consistent with their ethos, singular in composition and delivery. The project tries to explore the ideas of identity within the vastness of the universe, and the fierce emotion that accompanies one triviality.

Teumohenga has found the confidence of his voice, generating a more vocally lead EP than that of 2014’s Presence. The expectant uses of field recordings are masterfully mixed. The music is fluid, ever evolving throughout the duration of the EP.

The first track Settle has a nominal opening, showcasing the soft, subtle vocals of Teumohenga. The multitudes of sound are lenient, ensuring lyrical dominance. The crescendo of the song is built through tiers of sound layering and overlaying vocals.

The song impeccably sets up the introduction of All My Skin on the Air, a genre amalgamating track that has already had a stellar response with plays across FBi and triple j as well as receiving earnest streaming numbers on Spotify.

Teumohenga’s superior mixing emerges through this. The metamorphosis from drawn away vocals and background subtleties concedes to an immediate three fold layering and interplay between low, bass tenors and elevated electronics.

The despondent atmosphere of the song coupled with a lyrically perceptive performance creates a rawness to the track, optimal for the explorative themes of self-awareness and emotional justification. A guitar solo is introduced in the songs denouement, Teumohenga’s skills never relenting.

Autopsy is a lighter toned, fast paced track that vibes a space odyssey. Galactic synths and repetitive beats surge and fall within the track. Teumohenga stages his variability through oddities of percussion, unrecognisable sounds, experimental rhythms and synthetics.

Bodily creates the impression it should be accompanying a film. Background sound textures offer insight into actions rather than music. The slowest paced track of the record is supplemented by the overlapping of nondescript sounds and field recordings (I am 99% sure I can hear car keys) against the cathartic vocals.

The final song of the EP is Lonelyspeck’s recently released single Happy New Year. Teumohenga stated that the first incarnation of the track began as 2015 bridged into 2016, hence the song’s title. It took a year to complete, the liquid sound a worthwhile wait.

Lave is out this Friday March 3.