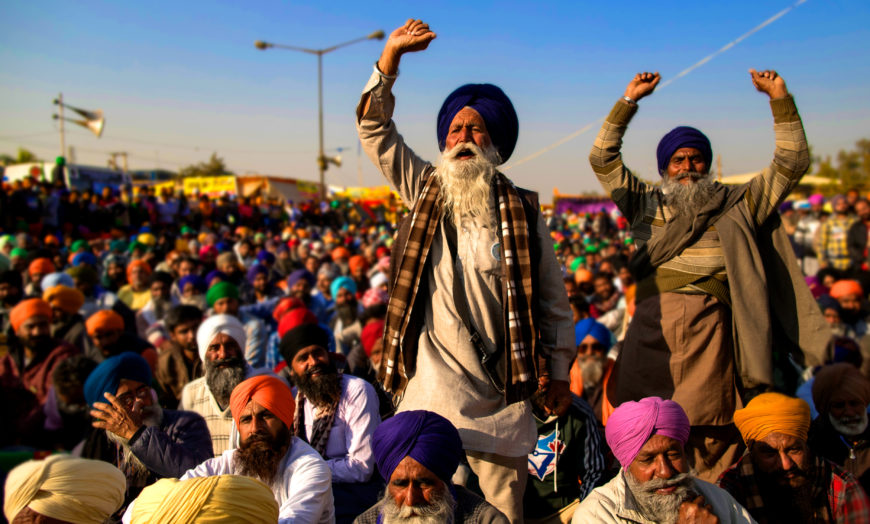 The farmers’ protests – the world’s largest mass demonstration – began on August 9, 2020, in response to three farm acts passed by the Parliament of India.

Samyukta Kisan Morcha (English: Joint Farmers’ Front) announced that the blockade of New Delhi’s roads would last five hours. “It is not our hobby to block roads, but the government is not listening to us. What can we do?” said Satnam Singh, a member of the group.

Prime Minister Narendra Modi’s government says the September 2020 farm acts are necessary to modernise the agricultural economy, but farmers have voiced concerns about being stripped of previous governmental protections – with the new legislation leaving them poorer and subject to big corporations. Passed by the Parliament of India in September 2020, the laws loosen the rules around the sale, pricing, and storage of farm produce, meaning that farmers can sell directly to private buyers, instead of government-controlled markets where they get a minimum guaranteed price (MRP).

In early 2021, the Indian government proposed delaying the law by 18 months to find a solution to end the deadlock. However, Samyukta Kisan Morcha released a statement ruling out any sort of compromise: “In a full general body meeting the proposal put forth by the government yesterday was rejected…We will not go back without the repealing of these farm laws.”

100 days, still on the roads., don’t know how many more to go??? AND STILL IGNORED BY THE GOVT #FarmersCallBJPboycott #FarmersProtest pic.twitter.com/yMJgxwG1FR

Despite one incidence of violence in January 2021, where a group of protesting farmers broke through barricades to storm Delhi’s historic Red Fort complex, the protests have been mostly peaceful.

4 photos from KMP which was blocked by Farmers on completion of 100 days of farmer protest. pic.twitter.com/Zn5IAy4PVf