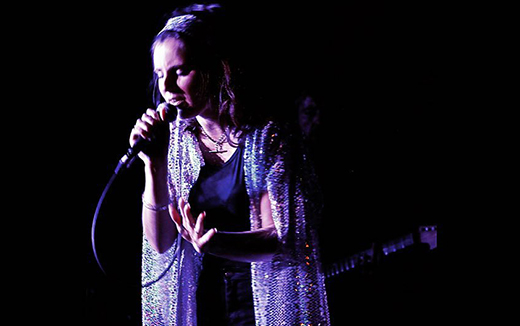 Sydney has copped a pretty bad rep when it comes to live music. It isn’t without reason either, with many popular venues either forced to close their doors or gentrify to the point that live music is just a memory. Regardless there are a few choice events happening in Sydney that are definitely worth your time, and Rare Finds is one of them.

The guys at Rare Finds have been doing some great work with local Aussie artists, helping to build their brand and share it with the world. They’ve also been throwing their weight behind the Sydney live scene, co-curating the Visions events in Newtown, and throwing some pretty stellar parties themselves on the last Friday of every month. Last week it was Rare Finds 4, and with the likes of Solo, GRRL PAL and AViVa playing at The Standard Bowl it was a night not to be missed. With many doubting the strength of Sydney’s live scene it’s nights like Rare Finds 4 that give punters hope. Beers, bowling and babes make for a great night.

Walking into The Standard Bowl the vibe is tangible the second you enter the room. No surprises there, the venue has always been a magnet for mad vibes. As always a night here beats a night sitting in any old man pub. It’s an all-girl lineup tonight, and kicking things off is the indie-electronic vibes of AViVA. The centrepiece of the set is front woman Aviva Payne, her vocals are spot on as she aptly leads the band through a short and lively set. Tracks like Prism (including saxamaphone!) and Breathe go over well, the lingering crowd slowly drawn towards to the stage. Shout out to the guy who was slapping the air-bass the whole time, owning every hypothetical pop he mustered. And we’d be remiss not to mention the boss cover of Kendrick Lamar’s Swimming Pools, it was a great way to round out the set.

Perth darlings GRRL PAL took to the stage showered in their trademark boppy synths and Jay LeKat’s infectious persona. There were a couple of issues with the sound, LeKat’s vocals fighting to be heard but thankfully the sound guy wised up and adjusted accordingly. Speaking to the Happy crew after the show LeKat revealed she’d been having some bad stomach pains all night, but at the time you would never have guessed as she danced on and off the stage in carefree fashion. By the time Dare came around the air-bass guy had some competition on the dance floor, the Perth trio shifting the party into the next gear and stealing the show.

Headliner for the night Solo was a little nervous as she took the microphone in her hand. As it turns out this was Sophie Lowe’s second time performing live. It showed at first, her presence a little stiff as she focused on delivering the music. The shift of pace from GRRL PAL’s frantic energy to the more down-tempo Solo took some time to adjust to. Three songs in she had settled in and began to embrace the performance, her rendition of Please really turned it on. It was great to see Lowe’s confidence grow as she continued, tracks like Understand and Dreaming hitting their stride. Not too bad for her second gig.

Overall Rare Finds 4 proved to be a pretty fun night. Considering the night revolved around three relatively small acts it was clear what people in this city want is a fun night where they can check out some sweet bands. That’s what the Rare Finds guys set out to do, and they fucking nailed it. Beers, bowling and babes, what more could you want?