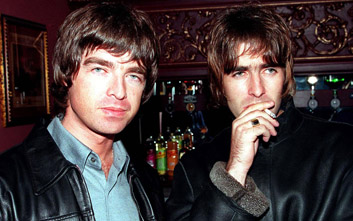 It’s hard to think of the last time a straight up and down rock and roll band incited the same level of madness, excitement and absolute hysteria as Oasis.

Given their humble Mancunian roots, their rambunctious public persona and overt sibling rivalry coupled with their musical and songwriting genius, it’s not too hard to see how decades later the northern rockers still manage to make an impact.

Periodic murmurs of a possible reunion tour or a brotherly reconciliation reignite levels of total fandom akin to The Beatles and some of their greatest musical contributions including Wonderwall and Champagne Supernova have a continuing hold on commonplace pop-culture.

But behind the tunes were two dudes who became bigger than their music, their background and themselves – their meteoric rise in both fame and infamy documented in the tabloids and a string of absolutely unbelievable behaviour, the type of shit only the Gallaghers could get away with… here’s 7 of the best ‘only Oasis’ moments. Few bands left as much destruction in their wake as Oasis did. Here are 7 times they went above and beyond in their field of rowdiness.

Oasis gets deported from the Netherlands

This simply has to be one of the most iconic ferry trips of all time. An evening of champagne and Jack Daniels on a ferry ride to Amsterdam, for what was set to be their first ever international show, saw the Oasis boys get in a full-blown, boozed up brawl with a gang of Chelsea F.C supporters.

“As the fight broke out all I remember was it was a bit like Benny Hill,” Liam recalled in an interview for doco Oasis: Supersonic, “It was fucking mayhem man, I loved it.”

The bust-up ended with Oasis getting arrested and promptly put back on their bike to England.

Opening night of their first ever U.S. tour date resulted in an uncharacteristic trainwreck of a performance as each band member began playing different songs. The reason? A classic case of cocaine/meth confusion backstage.

This performance resulted in one of the first of many band breakdowns, with Noel calling it quits early on the American tour – telling their tour manager he was heading home to England, only to be found later in San Fran.

Liam and Alan get arrested in Munich

In 2002 during the latter leg of their German tour, Liam and Alan White found themselves arrested after a boozey brawl at a Munich nightclub.

The bust-up resulted in a postponed tour, a minor head injury for Alan after he was hit with a flying ashtray and Liam down two front teeth.

In 1996 Oasis were due to play MTV Unplugged at the Royal Festival Hall when at the last minute Liam pulls out of the performance. Noel took over lead vocals and the performance went ahead. Liam watched from a balcony, enjoying libations of cold beer and cigarettes whilst hurtling abuse at his brother performing below.

The guitar, which Neville claims he was inspired to learn because of Gallagher was returned to him hilariously inscribed with the below heartfelt message, along with the initials for Manchester City Football Club scribbled all over.

“Dear Gary, how many caps have you got for England!! How many do you think you deserved?? I’ll tell you. Fuckin’ none!!! Lots of love, Noel Gallagher.”

Noel wasn’t the only die-hard City fan. Prior to reaching world-wide notoriety, Gallagher worked as a parking valet for Manchester United.

An opportunist of sorts, Liam proved his love for City by allegedly wreaking havoc on a number of Man United player’s, including taking wire wool to Paul Ince’s BMW, tipping a bucket of water of Ryan Giggs’ head and removing Eric Cantona’s car door.

In what can only be assumed as a homage to Keith Moon’s well-documented car meets hotel pool antics, Oasis sunk a white Rolls-Royce in the pool of Stocks House for the cover of their 1997 album Be Here Now record.

What could easily have been the work of photoshop set the band back $99,000, and as if putting a car in a pool wasn’t hard enough, it didn’t take long Stocks House to be overrun by manic fans and paparazzi.

Additional fun-fact: the car’s number plates were replaced to be the same as the black police car’s plates on The Beatles Abbey Road cover.