Among sound engineers, musicians and almost everyone involved in the music production business, the quest for the right drum sound has taken on mythic status. Why? Well, many factors are at play. Firstly, in the canon of major rock recording throughout history, truly magical drum sounds have indeed been reproduced on tape. Then there is the multitude of methods for tracking drums – it can be complicated, considering that the drum kit is made of multiple sound sources, with a broad range of frequencies to cover.

The sound of the kit is especially imperative to the genre of the record, therefore the way it’s recorded can significantly shape the sound of an entire record. Here is a detailed look at the process behind miking up a drum kit, testing a few different methods, with a few different combinations of microphones in order to find the most appropriate drum sound for different styles of music.

Drums are the very heartbeat of music. A good drum sound can define a record and a bad one will establish precarious grounds for the instruments to follow. There are a myriad of aspects to consider when recording a kit, so here is a helpful guide to the process of drum miking.

Before you launch into the recording process however, a note on rooms. Room size and acoustic properties are vital to the fidelity of the recording of any sound source and of course, drums are no different. Having a cavernous, cathedral-like space with vaulted ceilings and flawless dispersion qualities is much coveted, yet not entirely realistic in all space and budget scenarios.

It might not even be that desirable, depending on the sound you’re looking for. If you’re looking for a crispy and controlled drum sound, the last thing you might want are endless reverb tails bleeding into every mic. The room in which we conducted these tests is a smaller live space, dead but not too dead, with a low ceiling and minimal reflections.

The studio recently took receipt of a new palette of drum microphones, which we eager to try out on the Ludwig. We were also keen to warm up all the channels of the Phoenix DRS-8, which was suitably impressive, and offered up a pretty clear and true representation of the qualities of the mics that needed to be tested.

Before focusing on the full kit setups, we did a shootout of a few kick mic options in order to get a solid base from which to build up the overall kit sound. The mics were the AKG D112, the Beyer Dynamic M88 and the ElectroVoice RE20.

The first attempt was for an up-close and attack driven sound inside the kick drum with the 112. We weren’t too happy with the overall sound until we manipulated the axis. It really started to take shape when the mic was slightly off-axis. It maintained the desired attack and lost the “flappiness” it had when it was pointing straight at the beater.

Then we wanted to balance the kick sound with an outside mic. The M88 was perfect – it definitely added a desirable colour and body to the attack of the 112, but the RE20 was the best choice for the outside of the kick. It was just a little more pleasing in the top end, as well as offering a smooth and satisfying low-frequency performance. Depending on the application, the RE20 could easily be used as the sole kick mic, about 6 inches from the front head of the drum. 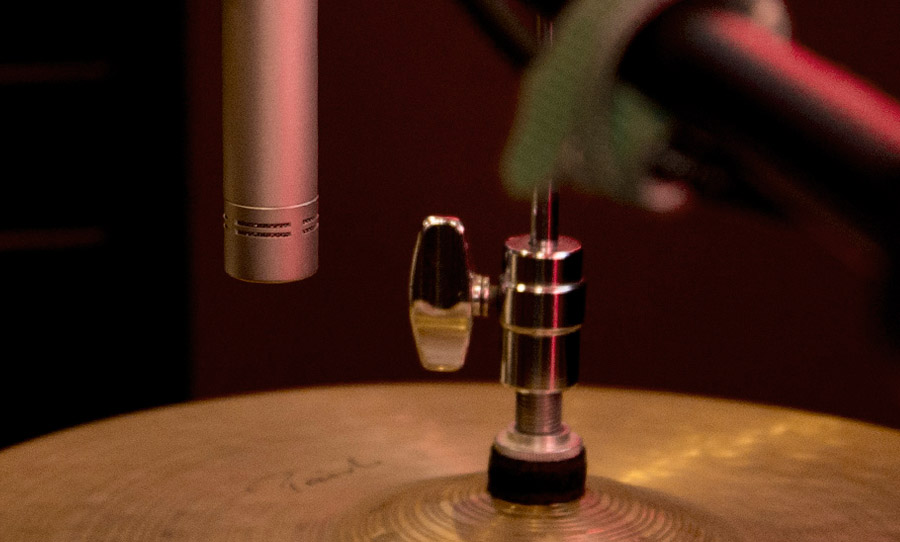 The next step to build up the picture in a vintage, open-sounding way. There is a famous technique that employs a single ribbon as a mono overhead, with the additional and perhaps quirky benefit of capturing the ceiling reflections. The ribbon, because of its mechanics, has a figure 8 polar pattern by default, so it’s equally adept at capturing the sounds from behind the mic.

Well, in this room, ceiling reflections aren’t that big a deal, but the sounds captured by the Royer R121 were fascinating. We are quite predisposed to ribbons – they have a vintage glassiness and dynamic capability that other mics offer. With a kick mic and an overhead ribbon, you could capture a great country, jazz or even lo-fi rock sound with flair and honesty.

It did occur to us though that capturing a compelling sound with such a minimal setup as this would depend greatly on the quality of the player whacking the skins. The drummer would really need to be in tune with their kit and be able to “mix” the drum sound with their own control of dynamics. Definitely not for the faint-hearted, but this setup could potentially yield some amazing results.

We then doubled-up the overheads with a stereo spread, keeping the original kick setup. This was more in line with the ‘Glyn Johns Method‘ who was the famous engineer who tracked the epic drum sounds of Led Zeppelin with no more than two or three mics! In any case, we definitely didn’t aim to scale those heights with this experiment, but the additional fullness that the extra overhead gave was fantastic, with a stereo spread to enhance the natural perspective.

We used a matched pair of Rode NT5 condensers and man, they’re bright! These little mics pack a punch, and in some situations, they could do with a little mellowing. But if you need a sizzling top end for a tight, pop-rock sound, they’d do the job happily.

After this, we started work on a close miking setup with an NT5 on the hi-hats, a Shure SM57 on the snare, and a couple Sennheiser MD 421s on the rack tom and floor tom respectively. The kit was starting to resemble a building site now, mic stands like cranes crowding the studio skyline. The challenges are different with more mics – shaping individual sounds for all the different mics, and spending more time getting a proper mix of all the new drum channels. And the big problem with all the mics in the vicinity: phase.

Phase cancellation was especially noticeable when we opened up the rack tom 421. Suddenly, all the bottom end of the RE20 on the kick drum was sucked out. So, with adding more mics, you’re essentially adding more time.

Phase aligning and pulling the right sounds for multiple mics can be fraught with frustration – so you really have to know your room, mics, drums and drummers. Yet, this setup does off the maximum control over the overall drum sound. If you were in a larger room, you could experiment further still with additional room mics for more extreme effects and ambience.

The best setup? Well, that of course is incredibly subjective but we tended to be more in favour of a slightly stripped down approach. The room used is a very well-appointed acoustic environment, therefore, using less microphones – even just a kick and overheads, as prescribed by Glyn Johns – provided the most musical results.

Maybe we’re just a romantics, but in some cases it would be tempting to go with just the ribbon overhead. It’s just so different to a typical drum sound – especially a modern drum sound – that it might just add that extra magic to a track to really elevate it beyond the norm.

As with any of these methods, the message of constant experimentation should be heeded. Some engineers have built entire careers on the strength of their drum sound which goes a long way to explaining its importance. The kit is the heartbeat of rock and pop music, so the search for the best drum sound for any given song is an admirable and important one.