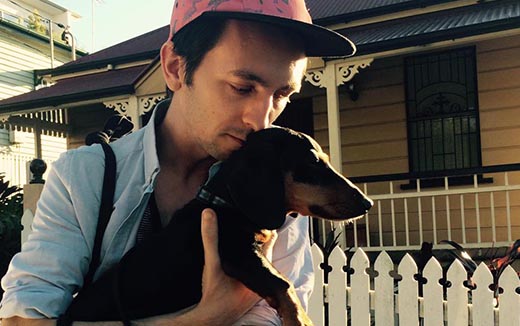 Think back to the last time you were out at a bar or house party and you were watching a skinny white guy on the dance floor having the time of his life. You’re watching him in a display of dance moves that we all indulge in, in the comfort of our own bedroom and there’s that part of you that really wants to join him, or at least possess just a slither of the confidence he exudes. Big Strong Brute’s latest video clip Wait is just that; a completely relatable, delightful music video of a skinny guy having the time of his life, only he’s dancing around a homely looking lounge room with only a single beer in sight. With a dash of Springsteen’s Dancing In The Dark and a sprinkle of Napoleon Dynamite weirdness, Big Strong Brute’s clip for Wait will get you geared up for the weekend.

Wait is the new single from Brisbane musician Paul Donoughue, who in an act of thrift and charm, stars alongside an endearing dachshund in his latest video to present an impressively polished final product. Under the direction of close friend, Rohan Cooper, Donoughhe dances around without a care in the world, perfectly capturing the essence of Bruce Springsteen’s Dancing In The Dark, with a sprinkle of Napoleon Dynamite awkwardness to bring a giggle or two. The lyrics of the track are bluntly delivered, clear and honest, just like the video.

Big Strong Brute isn’t just the brilliantly ironic alter-ego of 26 year-old Paul Donoughue, but is the product of a burgeoning Brisbane musician who has found himself nominated for the Australian Music Prize and a Queensland Music Award for his 2012 album Avalanche Of Truth. He has shared the stage with indie-pop greats such as First Aid Kit, Mount Eerie, Tiny Vipers, Holly Throsby and Ben Salter, just to name a few.

Wait comes from Big Strong Brute’s EP Good Work set for release on July 31, and comes ahead of an east coast tour to celebrate the release. Recorded with Todd Dixon (Meg Mac and The Panics) on a family cattle property in Old Koreelah, NSW during winter of last year, Good Work is set to follow the same vein of Donoughue’s previous releases, in an exhibit of adding an air of intelligence and cleverness to catchy pop song-writing.

If you’re a fan of the likes of Neutral Milk Hotel, Elliot Smith or Sun Kil Moon then Big Strong Brute is the man for you. Aside from watching to find out if something crazy like the roof caving in to interrupt this whimsical dance routine, Big Strong Brute’s latest clip is a fine watch, even if just for a giggle at a skinny white guy with some absolutely stellar moves.