As Perth psychedelic rockers Moana prepared for the release of their upcoming video Scarab, one thing was clear: they were drawing on deeply personal influences in both the sound and production design of this latest offering.

Scarab is manifestly the sum of ideas that come from the deepest recesses of the band’s psyche. This lends weight to their powerfully trippy outpouring… and honestly, it’s a little freaky.

But that may be exactly what they are going for. Moana have opened up about the previous year, with carnally throaty lead singer Moana Lutton calling it a period of “heartbreak [and] intensity”. 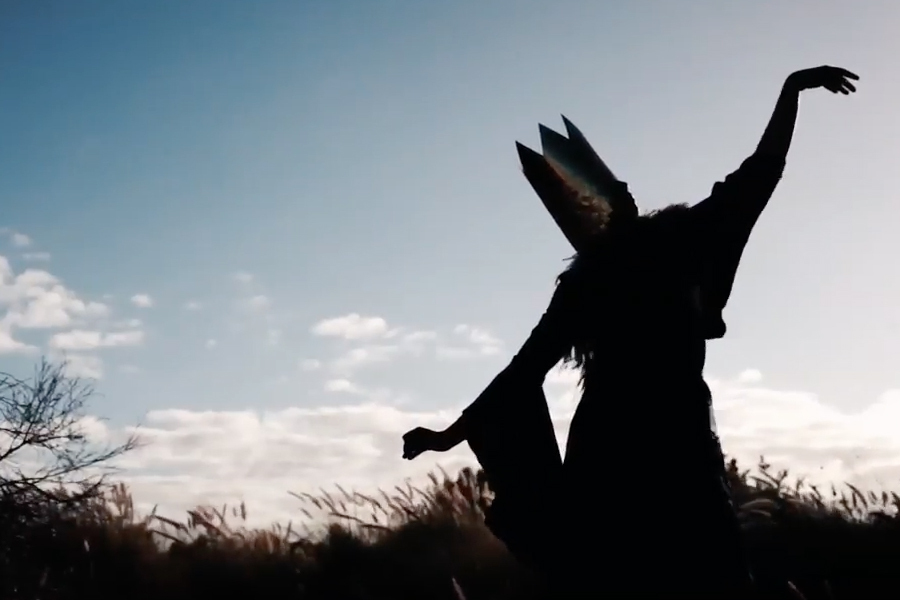 Employing elements of drone, metal, spoken word, and performance art, there’s no doubt Moana have reached for something blindingly new with Scarab.

All of this seems to have led the band in a direction which sees them tapping into their inspirations in a more varied, deeper way. In comparison with 2015’s Elephant Bones, which at times felt like emotionally distant pageantry, Scarab is more abstract and yet, ironically, more cogent.

That there is a multiplicity of influences in Scarab’s artsy film clip is self-evident. The lead single from their debut album is awash with references to everything from Victorian era mystics, ancient pagan rituals, 1960s B-movies, and 90s freak-out grungecore.

But just like a dream groggily described to your housemate the morning after – “So get this: I was flying, but my wings weren’t really wings, they were pumpkins” – it doesn’t make sense. Except that to those who’ve witnessed it firsthand, it does.

The scattering of sources is not reserved for the visuals, also manifesting in Moana’s sonic style. At a time when it seems fashionable to arrive at original sounds in psychedelia via technical means (think King Gizzard’s extra-fret guitars, or Kikagaku Moyo’s custom-built electric sitar) Moana are approaching things from a genre-melding angle.

It’s easy to see why the foursome were the chosen tour-mates for You Am I’s Tim Rogers with his long and musically-varied career, or other fusion bands like Ocean Alley.

Moreover, they are, at the heart of it, accomplished musicians. Lutton herself is front and centre, and rightly so. The lingering image from Scarab is that of her bandmates tending to her body-corpse with unguent oils and bandages.

In supporting Lutton they remind us, as an audience, of the attentive care we should be lavishing on talented women in psychedelia, comparatively rare as they are.