He goes by Jimmy Chang and refers to his music as “hot tuna” but once you hear it, you’ll be hooked and reeled in just the same. Formerly known as ‘Zealous Chang’, JC (Jimmy Chang) was in the business of producing collaborative, psychedelic jams out of his home in Perth but has since ditched both and moved to Melbourne. His LP is ready to drop any day now and contains a much more stripped back and poppy vibe. Feeling judgement for collecting your Centrelink checks? Worry not poor, malnourished student. Jimmy Chang has your back with Welfare Youth.

The album is perfectly title Changwave and it is carrying a whole lot of hot tuna, specifically one song by the name of Welfare Youth that touches on some heavy themes that will strike a nerve with the youth of Australia. The song tells a story of the Aussie student struggling and getting his weekly Centerlink payments to support his passion of music. The song paints a picture that most young Australians can relate to in one way or another.

The track urges you to shun the conventions of society and follow your passion, arguing whether it is worth living conventionally in mediocrity or taking advantage to shoot for your dreams. It calls out people who look down on Centerlink users, and rightfully so.

The lyrics are confronting and extremely real with examples being “Just wanna get high, fuck and make tunes, then sink some beers in the afternoon.” As well as “Maybe I’m just a hypocrite, haven’t done much with my existence but feel like in time it will be fine.” When asked Jimmy Chang states that his inspirations came during the ‘race rallies’ in Melbourne late last year as part of the Reclaim Australia Campaign which was also at the height of what is now being referred to as Abottism. Homage to this can be heard in the closing lyrics “Patriotic, fucking morons, I don’t care if I keep bludging.”

All in all it is truly the definition of a self-aware dolewave.*

The arrangement itself is quite the opposite. Sticking true to the new sound of Jimmy Chang, the song consists of elaborate layers and crashing riffs inspired by new techniques from a sound production class Chang was taking. However that being the case you will be surprised to know that, apart from the drums, the whole arrangement was recorded in his bedroom; just him, his guitar and some vintage Casio synths (also a pirated copy of Ableton but we will keep that to ourselves).

Welfare Youth addresses issues that are real and close to home. It’s a great listen and I urge you all to give it a fair go. Changwave will be released strictly analog for the time being with but an online release to follow sometime soon. For those of you in Melbourne head down to the Tote Hotel in Collingwood for a live listen and your chance to grab a Changwave cassette.

*Dolewave: music that sounds slightly doubtful of itself and its surroundings, a peculiarly and recognisably Australasian sound. 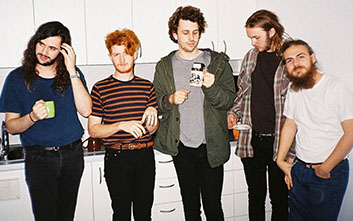