In case you missed it, an entire performance from Sigur Rós at the Walt Disney Concert Hall, LA was streamed live via Pitchfork. It was back in April, sadly falling a little short in terms of production at the time. Such is the nature of live broadcasts.

Now the set has been re-uploaded in full, newly edited and featuring a brand new audio mix, bringing you as close as possible to the full-bodied experience this show must have been.

We Australians have been a bit spoilt of Rós lately, the act hitting our shores for Splendour in the Grass 2016 and returning for the same festival this year. Whether you want to reflect on their last performance or warm up for the next, this is essential viewing. What’s better than a Sigur Rós set? Only one thing, and that’s a Sigur Rós set featuring one of the fullest, most professional orchestras on the planet.

The band performs with the Los Angeles Philharmonic Orchestra for just under an hour before dimming the lights on the ensemble and continuing the show solo.

With the Los Angeles Philharmonic Orchestra: 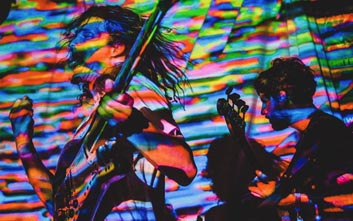