For the first time ever, Mardi Gras 2021 will be farewelling its home of Oxford Street for a ticketed event at Sydney Cricket Ground.

The annual Sydney Gay and Lesbian Mardi Gras parade is a staple in the calendars of many people, queer and non-queer. But, over the years, has it slowly become more of a walking advertisement for big corporations?

One of the largest pride festivals in the world, Sydney’s Mardi Gras dates back to June 24, 1978, where around 500 people gathered on Oxford street in commemoration of New York’s famous Stonewall Riots, marching for the end of discrimination against homosexuals in the workplace, under the law, and in society at large. What started off as a significantly small movement has become a nationally recognised day of celebration for those who identify as a part of the LGBTQI community. 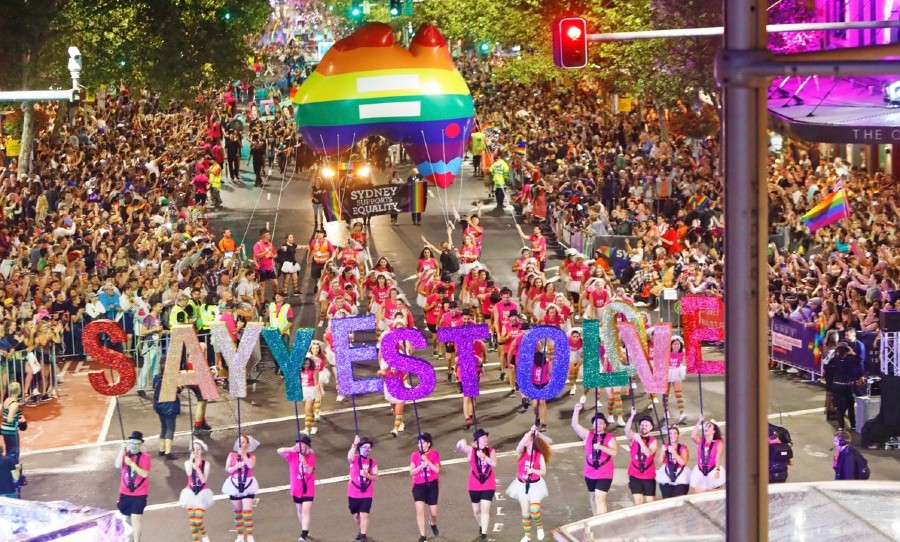 Nowadays, the parade still takes place on Oxford Street, featuring over 12,500 entrants in elaborate costumes and colourful floats. Community groups that support LGBTQI rights are invited to walk in the parade, notably Parents, Families and Friends of Lesbians and Gays, Australian Marriage Equality, City of Sydney, the Australian Defence Force, Fire and Rescue NSW, and the NSW Rural Fire Service.

It’s great to see so many people from different walks of life taking part in the parade and celebrating diverse sexualities, hand in hand. But as Mardi Gras grows further away from its ’70s roots, it’s become increasingly common to see companies registering for a float in the parade.

So Mardi Gras is now charging $20 per ticket, and yet still putting out calls for volunteers… https://t.co/xHzFxj3deo

It’s been a hot topic of debate throughout the years: do big corporations use their floats to demonstrate their solidarity with the LGBTQI community or are they exploiting this opportunity for free advertising?

Allowing companies to partake in the parade gives their workers a chance to celebrate their sexual identity in tandem with their career. This has a multitude of benefits – not the least of which is bettering independent performance. But it can also be used as a way for companies to promote their appeal to a particular group of people, without necessarily standing by the same ethos behind closed doors.

Take Qantas, for example. One of the largest airlines representing Australia in the aviation world, Qantas is a sponsor of Mardi Gras, and in 2018 they were labelled as “bringing Gayviation” to the parade.

Yet, Qantas is also a company that supports and continues to uphold its role in Scott Morrison’s bill which forces the deportation of asylum seekers and refugees. The irony is paramount: Mardi Gras is not only a parade that celebrates the diversity of sexual and gender orientations, but it’s also one that is inclusive of all marginalised communities.

I strongly appreciate the argument that corporations must come to Mardi Gras with clean hands — e.g. if @QANTAS is deporting refugee applicants, taking their money is aiding them in a PR exercise.

However, for political parties (and/or their members) who have refused to support the inclusion of LGBTQI rights within the law, why should they be invited to participate in the parade?

In 2017, the Australian Prime Minister at the time, Malcolm Turnbull, was invited to attend the parade. This provoked a fair amount of backlash from the community due to his “lack of action” on same-sex marriage. The Mardi Gras parade started as a political movement against homophobia within the law, therefore it’s ironic that parties who still have a long way to go in normalising LGBTQI rights in their political stance would be invited to participate in such an event.

Due to COVID-19 restrictions, the 2021 Mardi Gras parade will now be held at the Sydney Cricket Ground (SCG) – admittedly a seemingly strange choice for a pride parade.

Attendees will also be charged for their tickets ($20 for adults, $50 for groups of four, and $15 for children under 15 or concession holders). The company claims that this cost will help with running the parade under a “COVID Safe Model”.

In a statement to Junkee Media, the organization said: “Our partner, SBS, will also broadcast the entire event live so people around Australia can enjoy the parade at home with friends.”

Yet the announcement has elicited some less than enthusiastic responses on social media. Sure, $20 is a small price to pay as an individual – but this is an event entirely centred on the concept of liberty, and the idea of making people pay for it feels at odds with the spirit of Mardi Gras.

It begs the question: shouldn’t the expense of running this cultural event be placed, not on the individuals who attend, but rather the gigantic corporations that use the parade as a means for advertisement?

It’s great to see so many large companies stand in support of the LGBTQI community; however, why are they not paying a lump sum to be included? This agreement could be extended to all floats, with larger companies paying a bigger sum, of which they can afford, and smaller companies a smaller sum.

2021 is the year of Mardi Gras’ “new vision”, which includes “year-round initiatives to provide a platform for LGBTQI+ people, community groups and partners to celebrate, share experiences and provide support, no matter where they are”.

The organisation has also stated this means a “comprehensive community consultation process to better understand how the LGBTQI+ community would like to see Mardi Gras represent them in the future”.

Considering this, it’s interesting that the organisation wouldn’t listen to those who are calling for the 2021 parade’s ticket pricing to be removed, and instead place that pressure on the companies that benefit monetarily it.

Shocked to hear that 2021 Mardi Gras is moving here. pic.twitter.com/XPcy1RWHG2

Nevertheless, Mardi Gras 2021 will still be going ahead on Saturday, March 6, despite COVID-19 concerns. Regardless of the corporatisation of the parade, it’s great to have hundreds and thousands of people gather together in celebration of love in all its forms.