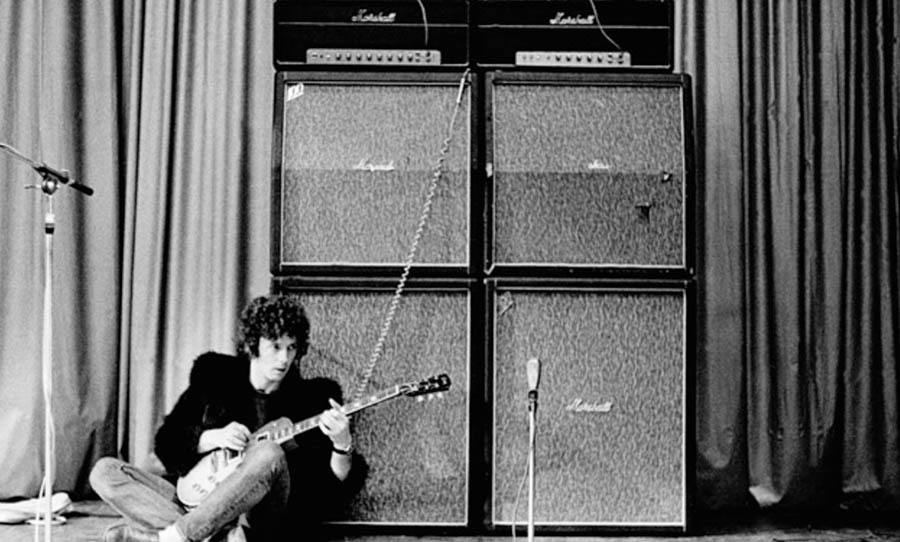 There are few more iconic sights in rock than a Marshall stack on the big stage. Discover how this amplifier emerged from humble beginnings to dominate the world of rock.

Fender and Marshall have been duking it out for amplifier supremacy since the plucky British company emerged as a competitor to the American firm in the early ’60s. Since then, the famous white cursive script logo has been an ever-present fixture on stages the world over. Even more so on the big stage.

You see, this was Marshall’s key differentiator in the market. Jim Marshall was implored by the rockers of the time to come up with an amp that was bigger, louder, able to cut through the noise with a definitive statement of rock attitude. The ‘Lord of Loud’ was only too happy to oblige. From such troubled beginnings, who could’ve predicted the impact James Charles Marshall (better known as Jim Marshall) would have on rock music? Marshall (1923 – 2012) was raised in west London and was suffered from tubercular bones. This debilitating condition meant many long days bedridden and was massively disruptive to his education.

The education that he was able to cobble together, though, proved invaluable. He avoided World War II service because of his childhood illness and became a musician, which was somewhat of a family trade. He also learned to be an electrical engineer, a skill which he used to create his first P.A. speaker for his life a gigging musician.

Marshall was a notable drummer and took on high calibre students like Mitch Mitchell, from The Jimi Hendrix Experience. With the proceeds of his music and education career, he established a music store in west London. While the store proved to be a sustainable base for his continuing drum work, it wasn’t until three influential guitarists tapped Marshall for their amplification needs that the seed was planted for a new venture.

Ritchie Blackmore (who would go on to form Deep Purple) Big Jim Sullivan and Pete Townshend (of The Who fame) implored Marshall to create an amp to their desired specification and cheaper than the pricier imported Fenders.

Marshall hired Ken Bran, Dudley Craven and Ken Underwood to design and build the first amp under the Marshall brand name. The amp was basically a copy of the Fender Bassman circuit, with a few key differences.

The Bassman used four 10-inch Jensen speakers in an opened-back combo configuration, while the Marshall used four 12-inch Celestions in a closed-back cabinet with a separate head. It also used higher gain ECC83 tubes, offering the amp a slightly pronounced tilt toward the upper frequencies and the ability to break up at lower volumes. It was titled the JTM 45 after Jim and his son Terry Marshall and its maximum wattage of 45 watts. The company soon became overwhelmed with the demand – they’d taken the American formula and put a unique British twist on it, plus made it more affordable, so there was a lot of appeal. After moving premises to cope with the production increase, Marshall set about innovating further.

For example, they made a small version of the JTM 45, which would be immortalised by Eric Clapton on the John Mayall & the Bluesbreakers ‘Beano‘ album. This combo – with two Celestions rather than four – would forever be known as the ‘Bluesbreaker’.

Marshall also inflated the size of the JTM 45 for Pete Townshend. By doubling the number of output valves and using two rectifiers and two output transformers, the gigantic JTM 45/100 (100 denoting 100 watts of all-valve mayhem) was born. Set up with two quad cabinets and you have the very first Marshall ‘stack’.

With the burgeoning scene of rock festivals requiring ever more volume, Marshall was in a league of its own. PA systems weren’t as sophisticated and powerful as they are today (with one or two exceptions), so guitarists tended to crank it up to the max.

Marshall introduced the Major (affectionately) known as ‘The Pig’. This amp, favoured by the likes of John Entwhistle, Mick Ronson (who played with David Bowie) and Ritchie Blackmore put out an astonishing 200 watts of power.

From the ’70s onward, the company dominated the realm of big stage amplification. The Marshall name would adorn ‘Plexi’ era amps of late ’60s, JMPs throughout the ’70s and JCM 800 line would satisfy the hunger for volume and distortion of heavier rock and metal bands throughout the ’80s. Nowadays, the company offers a diverse range of amps from classic reissues, to acoustic amps, micro-amps and even headphones. By the time Jim Marshall decided to get his feet wet in the world of amplification, there were already big players in the market. Fender was rapidly populating the world with their guitars and amps. Closer to home, VOX also offered a diverse range of products, including the AC30. This independent amp maker was up against it.

Sticking to sound business principles, Jim Marshall was able to spot a gap in the market – he could see that the future of rock was going to big and guitarists needed a sound – the Marshall sound – to match it.