How many of us have come to a point in our lives where we’ve sat and wondered what word or words do our tunes justice?

Talented, capable and ready for fame. But how do we find the name that will perk everyone’s ears, pique their interest, get them talking about us, Googling our story and then hopefully loving our tracks?

Sorted! To help you crack the mystery of how to come up such a name, we’ve meticulously researched and created a band naming infographic guide for you based on science and our years of experience in the music biz. Read on music lover, you might be inspired to come up with the coolest band name in the universe.

Before you go crazy, there are a few things we would like you to keep in mind. A good (and legal) band name must be:

So keep these simple rules in mind. If not, don’t blame us when you sit down again and wonder why your friends and fans all burst out laughing at your name or can’t even pronounce it. Clever as you are, surely you wouldn’t go down the path of Eximperituserqethhzebibšiptugakkathšulweliarzaxułum from Minsk, Belarus. (Yes, that’s a legit band).

So now to the coolest name… where do we start?

Start with… a name!

Not joking. Think about some big names: Dr. Dre, Beyoncé, Bruno Mars, Lady Gaga, Jay Z and so on. One thing they have in common is a catchy stage name – easy to remember, most sound like genuine names, all are short and to the point. Some are just born with it, like Beyoncé, who was named as a tribute to her mother’s maiden name (Beyincé). Same with Bruce (Frederick Joseph) Springsteen, Taylor Swift, and other talented folk like Bill Callahan and Damon Albarn. Others, like Bruno Mars (AKA Peter Gene Hernández), have tricked us all by choosing a strategically catchy pseudonym. He combined his nickname ‘Bruno’ with ‘Mars’, because apparently he’s “out of this world”. Yep. That’s what he said.

So think about your first or last name. If they’re plain Jane, consider your band members’. Write them down and take a look. ABBA is an acronym of the band member’s first names, and it’s catchy as hell! Fleetwood Mac is a combination of their two names, and Kings of Leon was created in tribute of the brothers’ grandfather. All it takes is a pinch of sentiment and a dash of clever thinking. 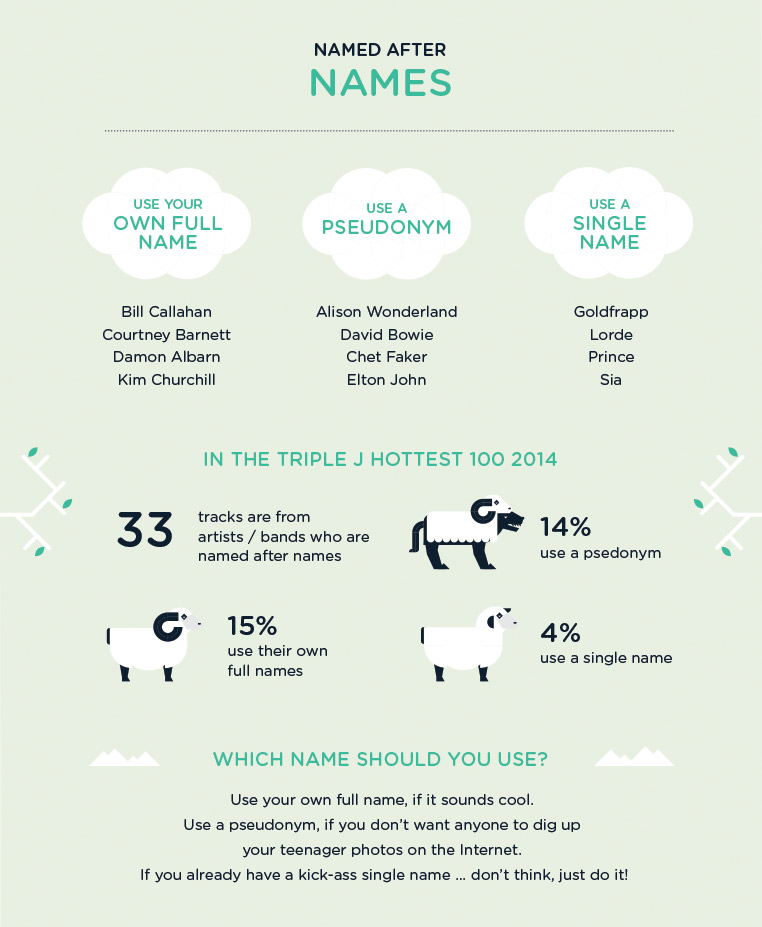 But what if you struggle in coming up with a genius name? What do you do?

Think about yourself, your band members, the world, the universe, and write it out. It is overwhelming to think about the vast universe. We know how puny we human beings are, but think from a different perspective, zoom in to an object, a person, a place, you could possibly get a lot of inspiration from there.

To be more specific, below are three main categories you can’t go wrong with. One of these parts might be all you need, or a combination of a couple.

Google ‘bands with animal names’ and you can get about 13,700,000 results. Check out the comments on Brad Frost’s list of bands with animal-themed names, people are enthusiastic. You surely can’t go wrong with this category unless you strongly insist in using names of the world’s ugliest animals. They could be cute to you but might not be for everyone else. And no Blobfish please.

Looking back from the 60s, the list of animal-inspired band names is endless. Here we have the ’The (Animal Name)’, mostly classic rock bands from the old days such as The Monkees, Animals and The Beatles; On the contemporary side we have bands like Arctic Monkeys, Cat Power, Grizzly Bear, Modest Mouse, The Mountain Goats and Birds of Tokyo, which are descriptive or a combination of an animal with something with a ring to it.

In saying this, we’d highly recommend you go for a descriptive animal name.

Not only that the ‘The (Something)’ is out, it is also more recognisable and creative than a plain animal name. Think storytelling. Alien Ant Farm is much catchier and funnier than plain old Ant Farm. And Snoop Dogg / Lion / Werewolf / Unicorn / whatever’s next is much better than ordinary Snoop. That’s just creepy.

What song do you love, and what one sentence or word do you love most about it?

Take note: avoid The Beatles’ songs. Our research shows that songs from The Beatles and The Smiths are the most borrowed ones. But bands named after The Beatles seem to have less luck with success, unless they change their names later on! Is it a curse? We don’t believe in that, but to be safe, perhaps just avoid Beatles songs for naming inspiration.

Another note: don’t try too hard to be cool or obscure. When we were brainstorming for this naming guide, our designers came up with some obscure, try-hard words like ‘A Flatulent Pain in The Arse’ and ‘Wittgenstein’s Roses and Teeth’ as examples. They are just weird. Always remember to keep it simple. If you’re still stuck, get some inspiration from the things around you.

Where are you? Literally. Where were the New York Dolls or the Alabama Shakes? Look around the house. Take the famous example of AC/DC who chose their name from the back of a sewing machine. Open your fridge. Think Vanilla Ice, Lemonheads, Peaches, Red Hot Chili Peppers or Salt n’ Pepa.

Open a book or dictionary and choose the first few words you see. This worked a treat for The Pixies, Outkast, and REM to name a few. Chose your favourite colour, number, city, body part, or song. Combine the words, for example, Red Robot.

Genius! Just remember to write these down, because it’s very easy to forget that eureka band name when you find it. That’s when heads roll.

Again it sounds overwhelming. Write ten down at the most. Once you have those ten words, take a break and come back to it later. Cross five out, and repeat. This will clear your head and keep you on the right track. Granted, you can have the coolest name in the universe. You still need the talent, impeccable charm, and stage presence to convince the fans to fall in unconditional love. Then a manager, a booking agent, a label… Yep it’s a tough game kids.

There’s no right or wrong way to choosing your persona – but this will help save some valuable hours for band practice. Get cracking. Share your ideas with us. Or if you still need some help, tweet us @happymusicfest or ask us questions on Facebook. Have fun!

Disclaimer: Entertainment only. A special thanks to the team at If You Build It who inspired this concept after their great naming your brand infographic got us thinking. Illustration and design by the team at IYBI.

Also check out our article on funny band names for further inspiration.