Mallrat’s new EP, In the Sky, bottles up emotion and hands it to you in a dreamy, electro-pop vial. The music she makes is personal, nostalgic. But it’s music for the world, and the world is drinking it up.

Before In The Sky drops this week, we caught up with Mallrat – aka 19 year old Brisbane local, Grace Shaw – and to discuss a love of things that feel old, making the move to L.A, and the ins and outs of her new EP (which she promises is miles ahead of her last one).

We chat with Mallrat about a love of things that feel old, ditching Brisbane for L.A, and the ins and outs of her wonderful new EP, In The Sky.

HAPPY: Hey Grace. Firstly, your name, Mallrat. It’s from a song by The Orwells right? Why was that significant to you when you heard it?

MALLRAT: Well I needed a name. And when I heard it, it just felt really angsty and like a 90s teen movie. I just love the 90s so I thought it seemed like a good fit.

HAPPY: Are you a mall rat?

MALLRAT: I was at the time. Not so much now.

HAPPY: And now the rat has become kind of like a symbol for you. Is that just from your name mallrat? Is there any other meaning?

MALLRAT: Well when I was little my teeth were crooked and I went to my parents and I was like “look, I’m a rat” and they were like “ah, she needs braces”. They took me to the orthodontist and they were like, “quick, we have to fix this issue”.

HAPPY: How would you describe your music to someone who hasn’t heard it before?

HAPPY: And In the Sky, your new EP, what can people expect?

MALLRAT: I think the production on it is sick so I’m really excited for people to listen to it with their headphones on and just find new things they like about all of the songs. And I think all the song are really different to each other as well. But yeah, I love it.

HAPPY: How is it different to the other stuff you’ve made?

MALLRAT: So, with the first EP, it was my first time making music. They were literally the first six songs I ever made. So I was figuring it out as I went. I wrote all the lyrics and the melodies but I was just being sent beats on SoundCloud to use. Whereas, with this EP, I co-produced everything. I was a lot more involved in the whole process, which is cool.

HAPPY: What were you listening when you were making the album?

MALLRAT: I love early Taylor Swift. So lots of early Taylor Swift and John Mayer. Like singer-songwriter, country-pop vibes and lots of electronic stuff too. Like Burial, which is quite garagey. Bibio and Maribou State. I think that’s what I was listening to while I was making it. And Young Thug.

HAPPY: You collaborated with quite a few people on the record – who were the most interesting people you found yourself working with?

So, it was Golden Vessel for UFO and Texas, he produced those. And Allday featured on UFO and I love working with him, and a guy called Konnie, who’s in The Belligerents. Also, a guy called BJ Burton from L.A., this is my first time working with him but I loved working with him. He’s done a lot of Bon Iver stuff and Francis and the Lights and Chance the Rapper. So, he was really good to work with. Japanese Wallpaper did additional production on that track. That’s the last track, Make Time. So, it’s like so lush. HAPPY: Nice. So we’ve heard you’re moving to L.A. Do you find it easier to make music there?

MALLRAT: It’s probably harder, but I want to try writing for other artists and try to work with different people and try break that market.

HAPPY: Is writing the thing you like to do most?

MALLRAT: Yeah, I feel like it’s my only skill. I think that, compared to other singers, my voice isn’t that strong but it’s good for the songs that I write. So writing is just my favourite thing ever.

HAPPY: I want to go through the In The Sky tracklist with you, and you can just tell me a bit about each song. So Groceries, what’s it about?

MALLRAT: Well it’s funny because most of my songs, I don’t mean them to be about anything. It just like ends up feeling like something. But this one, I guess, you could say is about something. It’s about having a crush but not wanting to have a crush on someone. Being like, this is so annoying, I don’t want this. I love being independent, so when you really like someone it can be annoying.

HAPPY: And Texas. The vibe or the meaning behind it?

MALLRAT: It’s just a bit emo. And it’s about wanting someone to be well but they’re just struggling.

MALLRAT: The same thing. Just wanting the best for somebody.

MALLRAT: UFO is about feeling like an alien. I don’t know how to explain it. Like, I’m sure everybody feels like this sometimes, I don’t feel as if I’m like any of these people. I love all of these people but there’s just something that feels very different. I think I could be from another planet, maybe that’s the only logical explanation.

MALLRAT: This is my favourite. I don’t know what it’s about. It’s just very calming.

HAPPY: What’s your favourite lyric from the EP?

MALLRAT: I like all of it… so, there’s a bit that goes, “Things that we forget to mention, screaming loud to get attention / Above clouds and air pollution, real as oceans, there’s resolution”.

And then there’s a bit that repeats heaps, and it’s like, “It started losing its appeal and I just don’t like sitting still / The beetles that he tried to kill, or grew up on my windowsill / Man this whole world’s a hotel room / I just hope you’ll be home real soon / It’s getting dark, and getting cold / I’m getting tired, you’re getting old”. I really like, “this whole world’s a hotel room”, that’s probably my favourite lyric.

HAPPY: That’s cool. Very Poetic. Are you thinking about how the words sound together when you’re writing, or do you focus more on making them mean something?

MALLRAT: It always means something in context. So it’s hard to be like, this song is about one thing because I just pull from all these different situations and stories that feel similar, that have something in common. That’s kind of how I think about it.

Because I think a lot of people when they write, they want to create a storyline with a character and you get to see where the character is going like a story. But for me, I would just rather pull an emotion, bottle up an emotion that people can listen to and attach to their own narratives, and be like, “oh that’s me”. HAPPY: Lyrics aside. How would you describe the vibe of the EP?

MALLRAT: All the songs are so different. Better and Groceries are very bandy, acoustic, pop vibes. And then Texas and UFO were produced by Golden Vessel, so they’ve got this electronic flavour. And then Make Time to me it feels like you’re underwater and you’re at a mermaids wedding. That’s how I like to think of it.

HAPPY: So the story is the feeling. I’m seeing a little bit how your brain works. I like it. I really like your music videos too. They’re super feminine and dreamy but then they’re also down-to-earth and bold. What do you think about when you’re making a video?

MALLRAT: So, for Better and Uninvited, which are the ones I made when I signed with the label and had a proper budget video, I was just thinking about what will look cool and help project the song’s feeling. For those two, I worked with my friend Rory from Adelaide, who’s got a great eye for colours.

It’s kind of the same with the song, where I don’t want it to follow a narrative. I just want it to look good and feel nice.

HAPPY: Was there a major influence for those clips?

MALLRAT: For the first EP I just made lots of little videos on iMovie. I’d download heaps of stuff on YouTube. Those are my favourites to make but I don’t know if it’s legal to monetise them because it’s not my footage.

HAPPY: Are there any more on the way?

MALLRAT: Yeah, I just finalised the UFO one today.

HAPPY: Is Allday in it?

MALLRAT: Yeah. We filmed it in L.A. There’s this car scene, where we are just driving. And there’s a really beautiful backdrop and there are bits that didn’t end up making it into the video where I’m standing on the seat and we’re driving. So it’s very like ooh, boho. But we got pulled over. Tom [Allday] was driving and neither of us had our licenses. And we were on a highway, and they had to pull over to be like, “that’s so illegal, where’s your license, why aren’t either of you wearing your seatbelts”. We were like, it’s for a music video. And they were like, “oh ok, carry on. Just don’t do it again”. You get such a free pass being like, oh it’s for a music video. It’s like, “ok, carry on then”.

HAPPY: What did you and Allday initially connect on when you met?

MALLRAT: I was a fan of his first and he’s kind of what inspired me to make music because I love how honest he is and how he tells stories really differently to other people. So I felt like I could see myself doing something like this. And then I sent him and the producers that he worked with some demos and then eventually I went down to Melbourne from Brisbane and we met and became friends. I don’t know, I just feel like I’ve known him my whole life. So we’re like besties. We have these matching flower tattoos on our hands. I got that on my 18th birthday.

HAPPY: Did someone draw that?

HAPPY: Who are your Aussie music inspirations at the moment?

MALLRAT: There are so many people. Jungle Giants are so good. They’re the first concert I went to. I love Tkay Maidza, Allday, Cub Sport. Northeast Party House are really cool, and Flume and What’s So Not and… there are just so many. Meg Mac and Jack River. So many cool people.

HAPPY: Can’t wait for the EP to come out. Is there anything else that you want to tell people about it before it’s released?

MALLRAT: I think you should just trust me that it’s good and give it a listen, even if you haven’t listened to my music before, it’s way better than the other EP. Even if you liked the other EP, this is way better.

In The Sky is out June 1st via Dew Process. 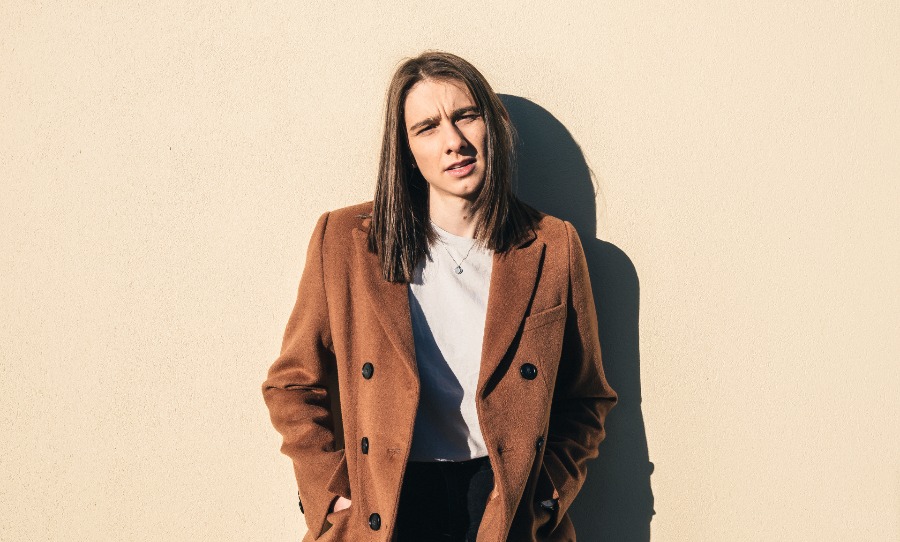