Brisbane’s premiere hard rock band Dead Letter Circus have arrived at album number three Aesthesis. As singer Kim Benzie sits down to chat he discusses how he found new focus for his lyrics, and trying to find happiness in a world at war with itself. HAPPY: Hey Kim, it’s nice meet you. It’s funny that we’re doing this, your band was the first gig I ever went to.

HAPPY: Yeah! At The Harp down in Wollongong, it was pretty awesome. Which made me realise that it’s almost been ten years since the band started!

HAPPY: That’s a long time man! To go from a chance meeting in a rehearsal space to headlining tours and now album number three is here. Did you ever think you’d be here?

KIM: We never really had any huge aspirations and goals at the start, we were just doing it for fun. Then we had a little list of goals and it got to a point where we achieved them all. We had to set some new ones! We never thought it would get this big. To be honest the first couple of people we showed our songs to were the guys in The Butterfly Effect, it was a song called The Mile, and their reaction was “Oh dudes it’s too crazy. It’s too hyperactive, people aren’t gonna get it” and that disheartened us. In hindsight their music isn’t as complex as ours. But they were really good friends so they were allowed to say that to us. We were spewing, we’d spent a year of our lives writing all these tracks. But when we showed some other people they were like “These are pretty fresh“.

HAPPY: The Butterfly Effect have no idea what they’re talking about.

KIM: Yeah we like to rub it in their face. If only they got to support us. That was my dream. We’re really good friends, we’d be 70 years old and still be giving each other shit. If they could miraculously got back together and support us…

HAPPY: For the ten year tour!

HAPPY: Well things have been going pretty well and your third album is now here. You’ve always been such a sonically huge band, but what’s kind of grown is the imagery and messages of standing up to the establishment which was hinted at way back in The Mile.

KIM: It became a bit more focused I think. Writing lyrics can be hard because there are so many rules. This new album is probably the best for lyrical content. I got to say what I wanted to say and it came out really good. It feels really clear, and in the past it felt a bit cryptic. Every forty people will think a song will mean forty different things. People will ask if the lyrics mean a certain thing which wasn’t what I meant, but then I’ll go back and look at them and I can get their impression. 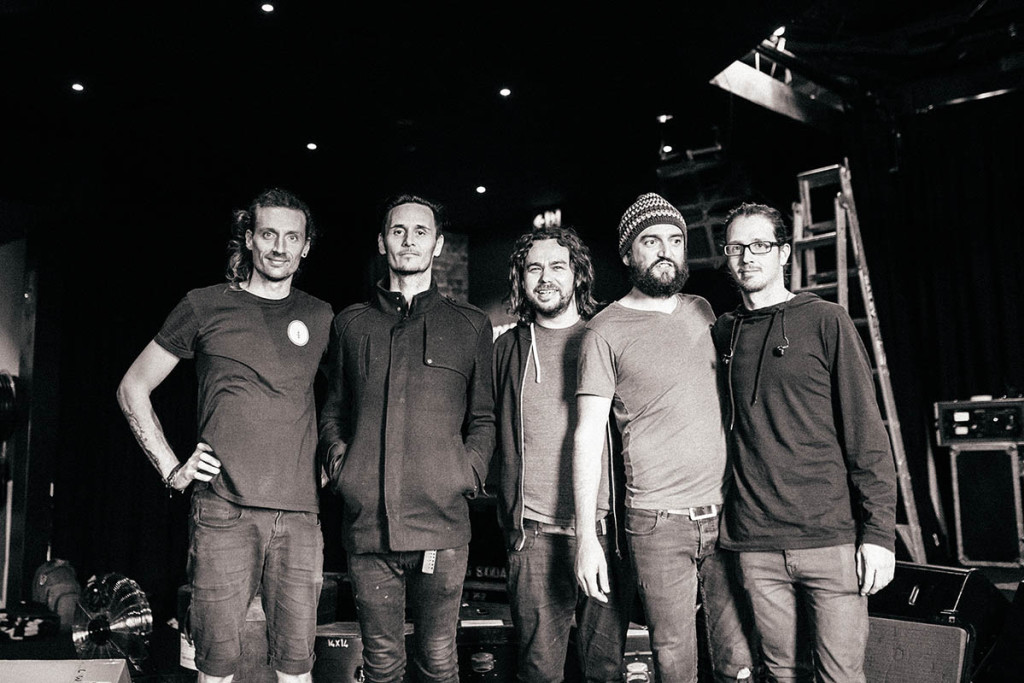 HAPPY: So what helped you become more clear and focused?

KIM: Hmmm, I don’t know. I reckon it’s just the time and where we are in our development. We had two months to get in there and record it. We had very little ideas going into it. We gave each song a massive period of discovery and it just became really easy. Some of the lyrics would come out in a big splurge and I’d think “Oh shit I’ll have to re-write some of that“, then I’d realise that is was all there. Hopefully that’s something that continues in my life (laughs). It wasn’t so bad on this one, but there would be other times where I’d be up at 4am, just stressing myself. You know when you have real hot eyes and you feel like you’re about to cry and you’re just really pissed off? (laughs). You’d be like “Fuck! I wish we had a short story in the lyric book so people will know what I’m saying!” (laughs). Yeah but this one was good, it was easy.

HAPPY: Oh good! Well the scene that you emerged from was always heavy but in terms of content it always remained personal. You guys really developed the socio-political angle quickly, so what is the message you want to portray?

KIM: It’s a personal epiphany moment. I think that’s why people relate to it because it’s written from that perspective, it’s never written to slam something down people’s throat. It’s a journey to whatever the point is. Most of the time really. Some of the new songs are really brutal, While You Wait is really brutal since there’s no happy ending. It’s the ultimatum of realising things are how they are and trying to make sense of that. There are a couple of relationship ones.

In Plain Sight is a relationship one. The last album was very much a spiritual awakening, of trying to fit yourself in this world. Coming back here and existing in the western world after travelling to some pretty spiritual destinations and you try to fit that into your life which is pretty hard. It can get a little depressing. You think “Fuck, if we just learnt a little bit from those other people the world would be a better place“.

HAPPY: Where were you travelling?

KIM: Peru in the Amazon. We went and stayed there for a while with a couple of guys from the band. We had some amazing experiences.

KIM: We went and stayed at this Ayahuasca retreat, which is worth Googling. I won’t bore you with the details but it can change your life. HAPPY: So when you came back what did you feel about the Western world?

KIM: Well something my friends agreed on is that when you’re there you can imagine this really harmonious world, everything is co-existing and your involvement with the rest of the world is that much more. It’s very spiritual but not religious, I’m not very religious. We were able to stimulate our senses in many ways, but there isn’t much heart or soul in it. It’s led by your head, which is why there’s a heart on the new album cover as well. We wanted to do a very simple statement of a heart based revolution I guess.

Sorry I think I floated off point (laughs). When you’re there and you’re in that world where there’s no TV or money system it is very harmonious and there are very happy people. When you come back you’re like “Fuck, how do I apply that here?“. It’s kind of hard unless you’re sitting on a park bench humming. The music is a really good release for that!

HAPPY: So I guess that’s the natural direction this album has taken. Your debut was very much a wake up call, while The Catalyst Fire was a progression from that, so where does the story go from here?

KIM: It kind of continues on. Not in every song, you’ll kind of get what I mean once you hear it. It’s really developed, especially the perspective of the person having matured. There’s a few points where there isn’t much hope. I do have some concerns. There are some times when we think we’re winning the fight and things are progressing really well, but then there’ll be another moment like the TPP that’s about to go through and the bill the government is passing. You’d think the people are waking up and uprising and there’ll be another corporate footstep in our territory. I really don’t know if it’ll end up good or bad, I just don’t know.

HAPPY: Do you ever see yourself as a leader in that kind of sense, advocating those thoughts through your music?

KIM: I reckon people doing that are like Russell Brand, that guy’s fucking amazing. I reckon our stuff is more of a sign post. You can always come back to it because it’s music. I don’t think I’m well spoken enough to be up on a podium or having a head on battle with a political leader. Ours is a really continuous thing that you can listen to in private and come back to.

HAPPY: Cool. When we arrived today you were working on some footage from the While You Wait video, and that clip had a lot of Big Brother imagery with the eye and the chess board stuff which was pretty cool. You directed that too, have you had much experience in that?

KIM: For the I Am video I wrote the script for that and helped out a lot but didn’t get credit for directing that one. There was so much post-production in this one. It’s a really good extension of the lyrics. In this one we had to be a it more vague because the lyrics are just too brutal; “Put your hand on the blade of the mother slain“, you know? What we thought we’d do was hint towards that problem and how to action solution. Initially the idea was I’d be walking through the desert as the threat and this overlord figure would announce that, and then we’d see the action and solution.

We ended up relaxing on it and deciding to put a lot of little imagery on it like the chess board and the pawns and people can join the dots if they can be bothered thinking about it rather than shove it down their throats. We’d already had this moment where we sent this to radio and thought “Man I don’t know, this one is brutal“. Then yesterday we did an interview with Triple J and no one has realised how heavy the lyrics are, so we pulled back from the initial idea and went with the cheeky clues.

HAPPY: Yeah it really has been lapped up by radio. I noticed that “Mother slain” lyric and thought that was pretty full on for DLC.

KIM: I think it’s because it’s so catchy. When I heard the melody the words came out straight away which is a really good sign. I thought it would be awesome if people were in their car singing along to this song. You know how people can be like “Da da der dirk!“, and not really know the words? I thought it’d be really cool if they were able to realise they’re singing about themselves and that there are so many problems in the world. It kind of worked I guess (laughs).

HAPPY: Nice! Well we’re almost out of time so we’ll ask our last question. At Happy we always talk about stuff that makes us happy, so Kim what makes you happy?

KIM: Hmmm, well I just had a baby girl so I’d say I’ve got the ultimate source of being happy. Yeah, it doesn’t really get better than that! I don’t want to be that dad guy (laughs), but it makes being happy super easy.