There is perhaps nothing gloomier than the thought of a black and white pedestrian crossing soaked by icy sheets of rain, but Yoshinori Mizutani is not one to dwell on the mundane. Rather, he strives to look at how something as undesirable as a rainy day can shift the way the world is perceived. Something he has explores in his photo series, simply titled, Rain. 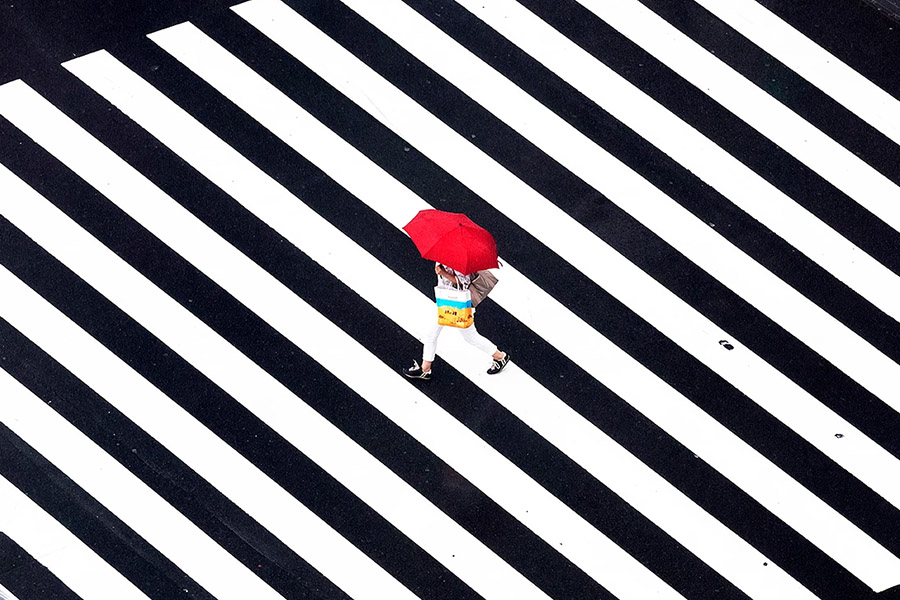 Who’d have thought rain-soaked pedestrian crossings could be as intriguing as Japanese photographer Yoshinori Mizutani makes them look.

“I always thought of rain as something gloomy and unpleasant,” says the Toyko-based photographer in a chat with It’s Nice That. “One day, however I stepped out into the city and realised how rain can alter our everyday landscape.”

The series focuses on a number of mundane urban scenes in the midst of a rainy day. However, it’s not the gloom that Yoshinori is interested in capturing, it’s how this gloom sits in contrast with the vibrancy of urban life.

One particular focus of the Rain series is commuters crossing black and white pedestrian crossings and how the brightly coloured umbrellas of the commuters and traffic counterbalance the monochromatic pavement.

“Even the most mundane details such as wet ground and rain drops can reveal a whole new world to us if we observe them from a slightly different angle,” says Yoshinori. “Rain is one of my continuing attempts to present a new perspective and interpretation towards our often overlooked daily phenomenon.”

Have a look at the wonderful series below.

You can check out more of Yoshinori Mizutani’s work here.