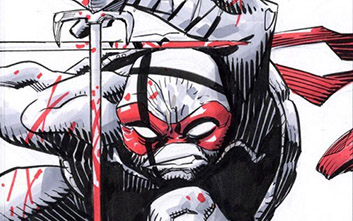 Earlier in the year IDW Publishing announced the Teenage Mutant Ninja Turtles 100 Project, an initiative to raise attention for struggling comic book artists the world over. Turns out, some of the artists behind the world’s most recognised comics still fight to make ends meet in an industry that often fails to be profitable.

Joined by the Hero Initiative, The TMNT 100 Project is a collaborative effort centred around the famous comic’s 50th issue, bringing together artists from all over the world to raise awareness and some much-needed dollar bills.

The Teenage Mutant Ninja Turtles 100 Project aims to raise funds and awareness for the amazing comic artists behind some of the world’s most iconic heroes.

The Teenage Mutant Ninja Turtles 100 Project asked comic creators around the world to contribute cover art for TMNT’s 50th issue in their own style. The fruit of these labours is an art book containing the complete collection of 100 covers featuring art from notable creators such as Stan Sakai, Dan Brereton and Kevin Eastman.

It’s a little late for Christmas, but you will be able to get your hands on the book from February 22nd, with all proceeds going toward the Hero Initiative.

Check out a few of our favourites below:

See the rest of the covers here.