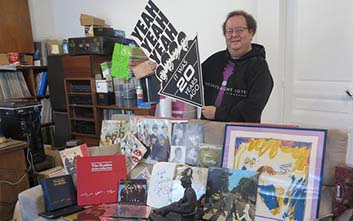 Jacques Volcouve is France’s foremost amateur Beatles expert and has been for the last 45 years. His obsession started when a friend of his brother’s lent him a copy of Sgt. Pepper’s Lonely Hearts’ Club Band, a gesture which kicked off a lifetime of zealous hunting and collecting – the loot: Beatles memorabilia.

Now, after spending the better part of his life collecting anything Fab Four, Volcouve is finally letting go. His 15,000 item-strong goldmine of memorabilia will go up for sale at the prestigious Drouot auction house in Paris in March with the proceeds to go to Volcouve’s retirement fund, which we imagine will be fairly substantial. After 50 years of obsessive collecting, French Beatlemanic Jacques Volcouve is selling off his 15,000 item-strong goldmine of Beatles memorabilia.

Chatting with The Obeserver, Volcouve remembers his first encounter with the Beatles and how it changed his life:

“The Beatlemania bug bit me and I was never cured of it. I listened to the album [Sgt. Pepper’s] and I thought the music was incredible. From then on, I wanted everything to do with the Beatles: records; newspaper clips, posters, memorabilia … everything.”

This fanboy hoarding habit turned into a full-blown obsession for anything Beatles related – records, signed books, posters, autographs, figurines and other memorabilia – a collection that now sits at somewhere around the 15,000 item-mark.

The sale of this goldmine will be a bittersweet bookend to a life of passionate obsession for Volcouve. To mark the occasion, the French Beatles tribute band We Love You Paul has been invited to play during the pre-sale exhibition of the thousands of lots.

Volcouve’s Beatlemania is one of cultural and artistic reverence, and in many ways, he is no ordinary fanboy. “The Beatles were a cultural renaissance. In my view, everything we have today in the way of artistic culture goes back to them,” he said. “For me personally, their importance is that while other musicians gave people pleasure, the Beatles gave people happiness.” Nevertheless, his obsession with the band has impinged on his life financially. Volcouve, who has had no formal “career” and now has no income, has little financial security to fall back on in his later years. He hopes for the auction to raise enough money for him to live comfortably in retirement.

“I don’t want to sound bitter but I gave my life to them [the band] and I’ve never had any recognition or help, not even a free ticket to a concert,” said Volcouve.

“For many years I was insufferable because all I talked about was the Beatles. I tried to find a professional job but in the end I was always the ‘Beatles historian’, and every time I had any money I spent it on Beatles stuff.

“Still, George [Harrison] told me in 1977 that if just one person appreciates your work then it hasn’t been a waste of time, and I know the things I have done over the last 40 years have been important to many people.”

“John wrote a song for Ringo that was never published about life beginning at 40. For me, life will begin at 60. I will go on loving the Beatles but the collection had become like an octopus whose tentacles were strangling me.

“I hope the sale will give me enough money to live on decently until I die, and my collection will have a new life with someone else,” Volcouve said.

The auction of his Beatles collection will be held at the Hotel Drouot in Paris on 18 March.