The Avalanches return with Wildflower
Skip to content
[gtranslate]
NH 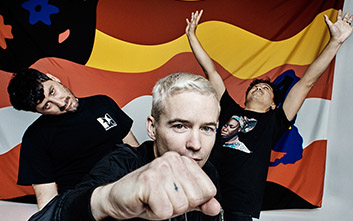 Sixteen years ago, the eccentric bonhomie of the 90s had to crash into the depressing, and listless 00s. 9/11 hadn’t happened yet, the housing bubble hadn’t burst, ‘trolling’ had yet to become a mainstream word, and climate change didn’t register with the public.

Sixteen years ago, The Avalanches brought their revolutionary first album Since I Left You into the world. A lot has changed since then, and now the Melbournian electronic outfit has finally birthed their follow up, Wildflower. After a 16 year hiatus, The Avalanches are back with their heavily nostalgic and equally contemporary sophomore record Wildflower.

When The Avalanches brought out Since I Left You in 2000, they provided a distinction in the booming, pre-digital electronica scene. Instead of using synths, turntables, keyboards, and all the rest to make tracks, The Avalanches stitched samples together to make new songs.

This style of music is called “plunderphonics” – taking other people’s sounds – and The Avalanches were revolutionaries in the art. They create with Since I Left You a very good album that managed to stand head and shoulders above the rest in 2000.

While Wildflower retains a lot of the aspects that made Since I Left You so iconic – its carefully curated tapestry of samples, gathered from a vast range of genres, random cuttings of dialogue, and other miscellaneous sounds – the effects of time, and a few strange creative decisions, stop this much-hyped album from being truly great.

The best songs on Wildflower are the most typically ‘Avalanchey’. Sunshine, the patron track for daydreamers everywhere, chops, and mangles just two samples into a wistful songs the likes of Kevin Parker wish he’d written, and sung himself.

Subways also features the masterful blend of Subways by Chandra with the testicle popping pitch of the Bees Gees to reinvent and reflect on 1970s funk.

But then there are the collaborations.

On Since I Left You there were no famous guests invited into the studio to shoehorn their work on top of other songs. On Wildflower, there are many examples, and although the collaborations are sometimes pleasant – Biz Markie rapping about eating cereal on The Noisy Eater, for example – they relegate The Avalanches from their special status.

Take Frankie Sinatra, the lead single that will have impressionable teeny boppers burning to sing some random old person’s name just like that Barbra Streisand nightclub banger did a few years ago.

The track cracks off with a sample from a calypso song (singing about Sinatra), before falling into a polka-esque bopping. Up to this point, this is The Avalanches to a tee; eccentric sampling, and honed songwriting skills resulting in a fun, and enjoyable song.

Then collaborators Danny Brown, and MF Doom step in. Their contributions aren’t poor, but their presence on the track transforms it to being just another big beat, alternative hip-hop track.

Another downside to this album is it’s general theme. From the title, (and the notion of a natural, undiscovered beauty), to the heavy sampling of psychedelic music from the 60s and 70s, Wildflower flounders because it’s fitting in too much with a modern trend that FriendlyJordies has pretty much killed already.

While the typical Avalanches idiosyncrasies within the album – the serene cutting-and-pasting of eclectic samples – still remain great, the push towards collaborations diminishes the timelessness of the tracks.

And the funny thing is, when The Avalanches do this, they begin to really sound like a soft version of The Chemical Brothers. And when did they have their heyday? Why, the turn of millennium, of course.