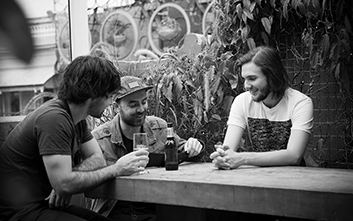 From XXXX beer to box jellyfish, Queensland has been showering Australia with creatively progressive gifts for nigh on forever. It is hard then to contemplate that it would yield any more. But yes, yet another jewel has surfaced for our sensory pleasure. Cast aside your furrowed brows and squints of doubt. The place somewhere above Newcastle is letting lose some lads who will have you seeing maroon.

Not to be fooled by their name, Future Haunts is a four piece band who is set to shred up the Aussie music scene pronto. Hailing from the place where the sun shineth always and a river runs through it, these Brisbane rockers are bringing indie back. Just like a good breakfast, you’ll be waking to something good. This band knows how to wield a guitar, induce the head bop, and have you swag-swayin’ to Friday drinks. Their new song, Devon Loch is about to descend from the north. It and winter are-a-coming. Future Haunts are back with single three, Devon Loch, and with no signs of slowing down, the world is their oyster – only we want a taste too.

The band – made up of Daniel Sergiacomi, Ben Speight, Tom Lindeman and Scott Thompson – formed in spite of battling the ubiquitous mighty foes of rent and share housing. Sergiacomi and Speight initially pioneered their sound, whipping up some sweet, sweet sounds with Thompson and Lindeman being recruited soon after to complete the squad goals. It does seem right that the band pursued to craft what is magical upon the ears and the four started pulling together tunes from 2015.

After riffing onto the scene with their unapologetic infectious guitar hooks, Future Haunts has swiftly spread within the Brissy system, doing the local rounds affecting all and sundry. With symptoms showing no signs of dissipating, Future Haunts headed into the studio to boil up more of the good stuff. This rounds’ on them.

With crisp guitar hooks, singer Ben Spaight’s straight-laced voice and drums that are very happy to be at the party and thus, very upbeat, what eventuates is a band whose sound is honest, raw and inviting. Devon Loch is bristling with arranged layers and build ups that swell into a sea of sound that’ll leave you cleansed and zen, groping for the beach towel.

The three tracks of Devon Loch, Underneath and Green Light all serve as organic legitimation as to why we are bloody lucky to live in this great Southern Land. Each offering is infused solid energy and decency, making their indie rock the perfect antidote to the pain caused by yet another song exploiting the ‘original’ drop and your stomach following suit. Not needing or going in for the bedazzled blitz that has swept the music world at large, Future Haunts is a band whose sound is grounded, straight up and puts the Straya in Australia Day. Listening along is like getting crackling jolt to the ears that reminds you of the hang times and beer you haven’t had with your best mate for ages, the thrill of a good rock song in the garage and a bicycle hat worn just right.

With not a drop of pretentiousness Future Haunts are a band whose ethos shines through their melodies, lyrics and arrangements; larrikins at large, covering what they know, seeking to connect and be a mate. And it just takes one song. Then you’re rolling with these lads. Because they’re legends, you’re a legend. You see how this works.

Never ones to slow down, the group have been deep in the groove of writing and are on course to release some new material later this year.

If Future Haunts want to take up residence in our ear drums, likely as not, we’d say we’re all very willing participants. Let their dwelling commence. Your ears are ready for their occupancy. 10 Brisbane bands that currently rule (we reckon): a list by Minor Premiers