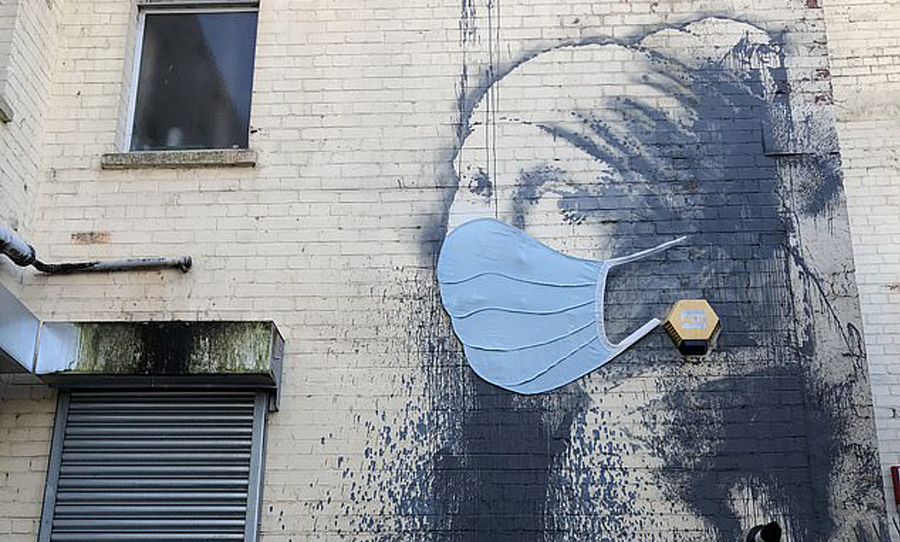 Banksy has been vocal about his social distancing recently, posting his approach to working from home online. However, one of his famous works has recently been given a 2020 appropriate update.

The elusive artist’s Girl With The Pierced Eardrum in Bristol’s Harbourside was accessorised with a face mask sometime during the week, but who was the one responsible for her extra level of caution?

The UK’s most enigmatic artist Banksy has let us know that he’s taking a step back from street art whilst in self-isolation. However, one of his local artworks has landed with a COVID-19 update.

A parody of Vermeer’s Girl With A Pearl Earring, Banksy’s portrait now wears a blue surgical mask alongside her ‘stretcher’, or outdoor security alarm, earring. The mural first appeared in 2014, and just so happens to be based in Banksy’s rumoured hometown of Bristol.

However, with Banksy clearly indoors, art lovers are curious as to who added her extra accessory. A Banksy admirer? Maybe there’s more than one of him? Or perhaps he just got bored during his allotted outdoor exercise time?

This wouldn’t be the first time that another artist has made their own addition to a Banksy piece. On Valentine’s Day this year, the artist revealed a new work, depicting a little girl firing a slingshot of exploding red flower in Bristol. The mural was sadly vandalised less than 48 hours later, with the perpetrators scrawling “BCC WANKERS” across the wall in question. It is theorised that this was targeted at the Bristol City Council.