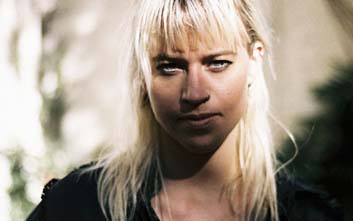 Bold, raw and passionate are three words that come to mind after hearing Fade, the impressive and delicate debut from Sydney songwriter and designer Annie Hamilton.

After a two month residency in the north of Iceland designing clothes for her fashion label and writing music, the former Little May lead guitarist has come back to Sydney and released her solo effort.

A slow-burner of the highest calibre, Annie Hamilton has set a high benchmark indeed on her debut single Fade.

The track is reminiscent of Sigur Ros, given those ambient Icelandic vibes. It also bears resemblance to bands like American alt-rockers The National and Japanese/American indie artist Mitski.

Fade carries a lot of emotion, and the passion invested within the song is obvious. I found it uplifting, yet experiential lines like “make me safe again” gives the track an overall sense of longing. Powerful lyrics, coupled with a complex mix of instrumentation, help give an insight into what Hamilton could be feeling.

The lyrical style also reminds me of something off Bon Iver’s self-titled album. For something that was partly recorded in a home studio, the quality of the track is seriously impressive, and we can’t wait to hear whatever else is in the works.

We first discovered Annie through our Needle In The Hay vinyl competition and picked her as one of our 30 finalists. She’ll beplaying our free Finalists’ Party at Oxford Art Factory on the 28th of June alongside RACKETT, Rosa Maria, Raindrop, Tuppaware Party and SOOK.

You can also catch her live at the Fade single launch, July at Waywards.