Grab your axe, bend the oars, and sound the raid horn – it’s time to go a-viking in the highly anticipated Assassin’s Creed Valhalla.

Assassin’s Creed is an aged beast at this point. With almost two dozen released games, numerous comics and novels, board games, films, and a live-action series in the works, one might be forgiven for thinking that the series should have run out of steam some time ago.

So, with the axe-swinging, mead-drinking, longship-sailing Assassin’s Creed Valhalla standing as the series’ twelfth main release, has Ubisoft Montreal managed to weave some fresh magic into this veteran franchise? Too bloody right they have.

A tale worthy of legend?

I must admit, I had low expectations for the narrative of Assassin’s Creed Valhalla. I anticipated that it would set up a bunch of tired, hollow clichés about gruff Norse men doing Viking things, and initially that’s exactly what I got.

Without spoiling any of the story beats, you’re thrown head-first into the shoes of Eivor, who is already a warrior of substantial fame and renown in Norway. The game clumsily expects you to care about Eivor’s existing relationships with the predictable, cardboard cut-out characters that you-the-player are only now meeting for the first time. Oh no, the fates fortell that you will betray that generic dude you have no reason to care about! Oh dear! Luckily, it becomes much easier to get invested once you make your way over to the shores of England, ripe for the pillaging, and begin to meet individuals that are blessedly unfamiliar to Eivor too.

From there you’ll be engaging in a range of fun, novel missions alongside well-realised, distinctive characters as you develop your new settlement and explore all the mysteries that this new land has to offer. The tone of the game also seems to shift at this point, from predictable to frequently delighting in its own silliness.

Go into this expecting the joyful, campy fun of an ’80s action film, rather than the meaningful, masterful storytelling of The Last of Us.

Being an open-world game, Assassin’s Creed Valhalla will naturally struggle to control the pacing and tension that the player experiences. Much like Ganon will politely wait to conquer Hyrule until Link has finished hunting Koroks, 873AD England will stand still until you’re ready to assault the next town or murder the latest despot. But that’s good news – because there is a lot to keep you busy.

Settlements to build, people to decapitate

Having arrived in England, you will find it absolutely teeming with things to do. The core mission is to establish a burgeoning colony in this lush new world, developing your fledgling colony from a hamlet, to a settlement, to a village, and beyond. For this, you will need resources – and what better way for a Dane to secure them than by raiding?

Raids are a true joy in Assassin’s Creed Valhalla. From the moment you point your longship at the shoreline of a target and sound your horn, you’re in for a treat. Peasants go scattering as your warriors clamber out into the water and storm in to overwhelm the defenders. Thatched roofs catch ablaze, terrified archers loose arrows then scamper away.

You and your crew are predators, and the entire country is your prey. 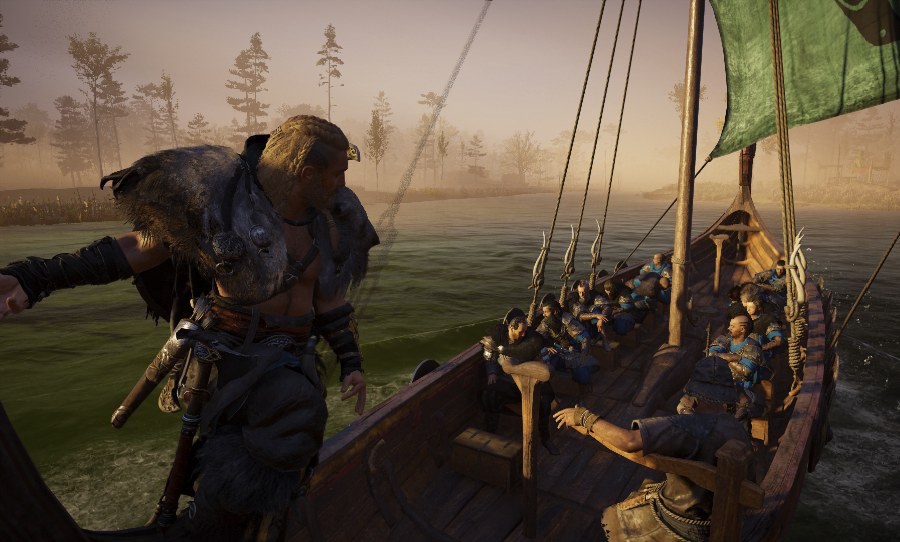 The primary quests in Assassin’s Creed Valhalla also support your goals of growing and empowering your settlement, as you travel from place to place building alliances and making your foothold in hostile territory more secure.

As you explore, you’ll naturally stumble upon a range of side-quests, mini-games, and points of interest. Lost Drengr are powerful warriors seeking a final worthy opponent, flying papers offer parkour challenges, and Animus Anomalies offer a change of pace by presenting puzzles to solve. The world is naturally littered with animals to hunt, fish to catch, and resources to gather – all of which can be invested into making you, your gear, and your fellow Vikingr stronger.

The mini-games found in various townships can be hit-or-miss. Drinking contests boil down to dull, extended quicktime events. Orlog is an amusing dice game that could stand to move at a faster pace.

My personal favourite was Flyting, where you and an opponent trade poetic insults, and the sickest burn wins. Who wouldn’t want to join in a Viking rap battle? 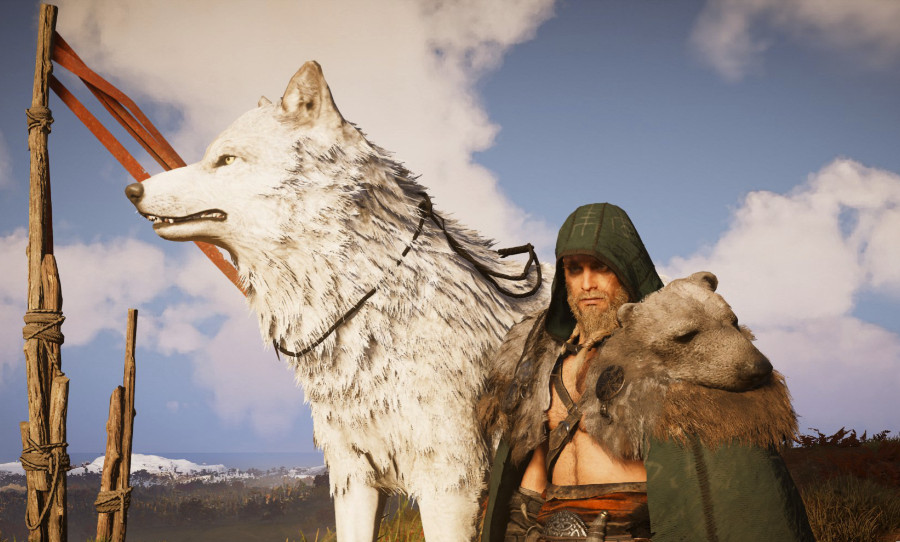 But aren’t you an assassin? With some kind of creed?

The customary franchise features take a back seat in Assassin’s Creed Valhalla. Sure, Eivor can still parkour with the best of them, deftly scaling the highest structure available to reveal that portion of the map. There’s still the obligatory sci-fi elements, where the game being played is ostensibly a simulation being run from the future. There’s still the ever-present shadowy war being waged between the Assassins and the Templars.

Stealth is still a viable option, assassinations are still beneficial, and of course you have a hidden blade housed inside a bracer. You get the idea.

Thankfully, much as Assassin’s Creed IV: Black Flag was a game about being a pirate who sometimes did assassin things, Valhalla is first and foremost a game about being a bad-ass Viking (who, yes, can also do assassin things). This approach worked wonders for Black Flag, adding a much-needed breath of fresh air to fill the franchise’ sails – and the same holds true for Valhalla. This creative choice plants it firmly among the ranks of the best entries in the Assassin’s Creed series. And the final verdict?

Assassin’s Creed Valhalla is a damned fine game in its own right, a stand out in the Assassin’s Creed series, and a worthy rival to any other open-world action RPG you might care to name. While it gets off to a shaky start in narrative terms, it soon finds its footing and delivers with appealing characters and interesting missions.

Going a-viking is a true pleasure, and the world you’re presented with is rich with compelling objectives and fun distractions constantly dangling new hooks to pull you forward through the experience.

Launch day is November 10th on the Xbox Series X, Xbox One, PS4, Stadia and PC, plus a PS5 version will be released with the console on November 12th. Do yourself a favour – head on over to the official website, pick up a copy, and we’ll share a mead in Valhalla soon enough.