Brass instruments are capable of some of the most explosive effects of all instrument families. But, the members of the brass family are a diverse group of instruments that can add more than just volume to music.

Used widely in classical, film, and popular music to add extra flair, brass instruments can also communicate everything from the sincere to the supernatural. Take a look at some of the many ways composers have used brass instruments to go the extra distance. 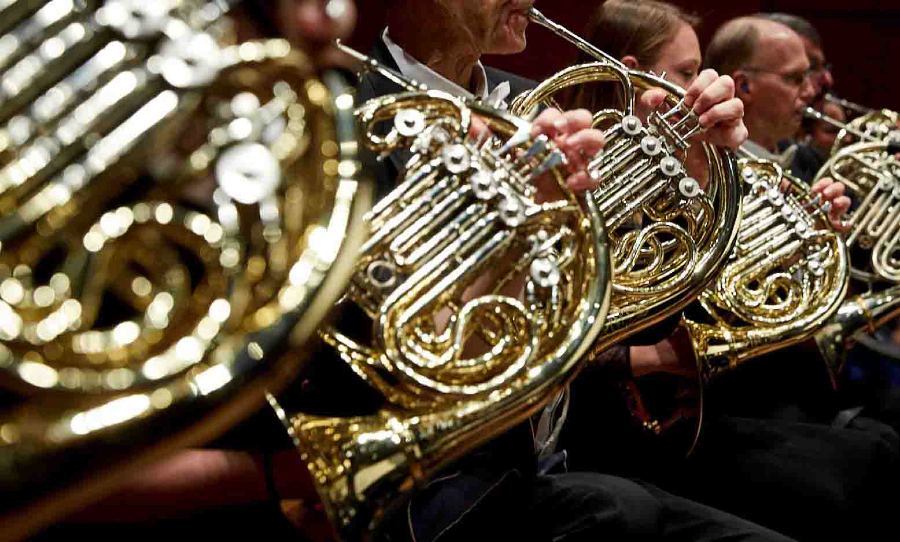 A history of brass instruments

Compared to the other three major orchestral instrument families, brass instruments reached maturity relatively recently. While the violin, for example, has existed in its present form since the early 16th century, brass instruments changed dramatically, up until the late-19th century.

The invention of the valve was the key technological innovation in the development of brass instruments. Prior to this, brass instruments suffered from a series of shortcomings. The slide mechanism of the modern trombone has existed for much longer, but other brass instruments followed two main paths. They played either in only one key at once, severely limiting their utility, or relied on a mechanism similar to those of woodwind instruments, which was ill-suited for the method of sound production.

These limitations, along with their ability to be played extremely loud, meant that until the beginning of the 19th-century brass instruments were used sparingly, for particular emphasis and special effects. Mozart, for one, used the trombone in only a handful of his more than 600 works, but always to accompany significant spiritual moments; for example, the Commendatore dragging Don Giovanni down to Hell.

Trombones often signified the spiritual or supernatural, trumpets were usually paired with drums for military settings, while the horns acted as the sonic glue between the woodwinds and strings. The tuba wasn’t even developed until the mid-19th century. But as the instruments developed, composers expanded on the symbolic use of these instruments, and by the end of the 19th-century brass instruments had started to become synonymous with heroics and adventure.

Richard Strauss frequently employed the horn as a ‘protagonist’ in his tone poems, and his hair-raising trumpet parts symbolised discovery, adventure, and war. Richard Wagner used brass in the Ring Cycle to represent everything from the heroism of Siegfried and the strength of the Valkyries, to the nobility of the gods and the inevitability of fate. Anton Bruckner used the brass family to replicate the spiritual sounds of his own instrument, the church organ.

One of the most common sound alterations for brass instruments is playing with mutes. It’s often understood that playing with a mute literally mutes the sound, making the overall volume of the instrument softer, but the more significant reason for playing with mutes is the resulting change of colour. Different mutes are capable of creating very different colours across the brass family.

Trumpets and trombones, in particular, have a wide range of mutes, including the cup mute, which reflects sound back towards the instrument, and the Harmon mute, also known as the wah-wah mute. Both mutes have a very distinct sound, and can be heard frequently in swing and jazz music.

Other mutes include improvised mutes from bowler hats or plungers, and stopping mutes designed to replicate the hand stopping technique of a horn player. There are also practice mutes, originally designed for privacy and to avoid disturbing others during a practice session, but the extremely quiet tone they produce has resulted in their occasional use in performance.

Brass instruments are also capable of a wide range of articulation and pitch effects, such as flutter tonguing (like a rolled R sound) and glissandos, as well as having a huge range in both pitch and volume. Because of this, and their history, brass instruments have developed a reputation as instruments for big effects. Early orchestral film music clearly shows the influence of late-Romantic style writing. Composers like Max Steiner and Erich Korngold were writing scores that were essentially continuations of the Wagner’s richly symbolic scores, which meant brass instruments remained synonymous with action, adventure, and drama. The association pervaded throughout the 20th century and still remains even in today’s film music.

While the demand for ‘traditional’ orchestral scores has come and gone throughout the history of film, the music of John Williams is in many ways the archetype for the style. John Williams too shows the clear influence of late Romantic and early 20th century music, relying on many of the same symbolic ideas laid out in those works, while also further developing the language.

John Williams certainly relies on the association of brass with action and adventure, deploying the brass to this effect in the main themes of Star Wars, Indiana Jones, and Superman, among others. In his score for Harry Potter And The Philosopher’s Stone, where the adventure is mystery and magic, rather than swashbuckling, the major symbolic use of the brass accompanies Harry’s first Quidditch match – a different kind of action.

However, Williams often shows a willingness to bend the associations with brass instruments. His use of the horn in the Star Wars series as one of the primary communicators of the ‘Force theme’, first heard as Luke looks out over the sunset, conveys a more introspective character for the instrument. The same character is recalled by the horn in Leia’s theme, which may also be a nod to the relationship between Luke and Leia.

Williams also uses brass instruments to signify the otherworldly. On one end of the spectrum lies Yoda’s theme, or for theme material in Jurassic Park. In both examples, the horn stands in for a sense of wonder and awe, in the face of gentle creatures with great unassuming power. On the other end, the main theme for Jaws features the tuba in an uncommonly high register, signifying the primal, relentless, and unknowable killer. Somewhere in the middle, perhaps, is the use of the tuba as the ‘voice’ of the alien Mothership in Close Encounters Of The Third Kind.

Brass instruments are also commonly put to use for special effects across all genres. The trumpet and trombone are obviously staples of jazz, but other brass instruments have often crossed the border. The tuba has been a long-standing feature of New Orleans style jazz, and in the ’40s and ’50s musicians including Miles Davis experimented with including both horns and tubas in their arrangements.

Trumpet and trombone in particular also feature prominently in funk and R&B. A significant example is the Phenix Horns, consisting of two trumpets and a trombone, alongside a saxophone, who were an integral part of the Earth, Wind & Fire lineup. The Phenix Horns also collaborated with Phil Collins on several of his solo albums, as well as with Genesis.

The Beatles, known for their pioneering in many areas, frequently deployed brass to various effects. Backed by producer George Martin’s orchestral arrangements, The Beatles’ catalogue is packed full of noteworthy writing for brass instruments.

Penny Lane features the most famous brass line in The Beatles’ catalogue, with the distinctive piccolo trumpet solo creating a neo-Baroque atmosphere that matched the quaint childhood recollections of the lyric. The song’s moodier counterpart, Strawberry Fields Forever, uses trumpets for a more pungent effect.

A brass section in Martha My Dear fills out the British brass band music-hall atmosphere of the song, and a similar effect is created in the title tracks of Sgt. Pepper’s Lonely Hearts Club Band and Yellow Submarine. All You Need Is Love features quotations from sources as diverse as Bach, Glenn Miller, and La Marseillaise, creating a maximalist atmosphere in the Summer Of Love. This idea also appears in the atonal orchestral crescendo in A Day In The Life, which is punctuated by a glissando from the horns.

Perhaps the only solo of its kind in pop music, For No One features a delicate horn solo that develops the gentle, domestic nature of the song. The solo itself is actually fairly unusual writing, pushing horn player Alan Civil into a register beyond the usual range of the instrument, but Civil’s playing on the record is remarkable.

One more horn solo finds its way into the end of Martin’s lush arrangement for Good Night, the closing track of 1968s The Beatles. John Lennon had said he wanted the arrangement to sound “real cheesy”, like a classic Hollywood production number. The solo perfectly encapsulates Lennon’s intentions, and shows that overt sincerity can be achieved with brass instruments.

Today, music finds itself crossing genre lines like never before. The concept of classical, film, and popular music as three distinct areas of work is becoming more and more blurred. In the last few years, for example, contemporary British composer Anna Meredith has turned towards electronic music, performing and recording with a band of five, featuring a tuba in the bass role.

As composers and performers look to expand their own horizons, the role of instruments will become more and more flexible. While in the past brass instruments have often been confined to playing certain roles, musicians in all fields have always found ways to push boundaries and use brass instruments in surprising ways. The future will certainly hold a lot more surprise.