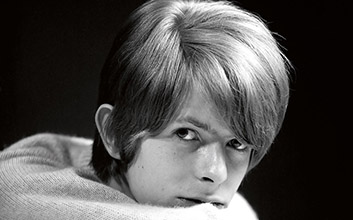 Photographer Gerald Fearnley is set to release his book Bowie Unseen: Portraits of an Artist as a Young Man, a collection of rare shots of a 20 year old David Bowie taken just before the release of his eponymous debut record. These rare photos of David Bowie just before the release of his debut album reveal a young artist taking his first steps into a remarkable fantasy.

The year was 1967. The then-unknown Bowie had recently changed his name from David Jones, so as not to be confused with The Monkees’ Davy Jones, and was about to embark on what was to be one of the most remarkable careers pop music has ever seen.

To capture his newly minted pop persona, Bowie enlisted Gerald Fearnley to photograph him in a studio session. It was there that cover from his debut album was shot. Besides that, the photographs taken during the session had seldom been seen until 2016 – five decades later.

They were released last year as fine art prints, but now have been put together in a beautiful collection.

“These whimsical, youthful images capture the artist as a young man only a few years before he’d transform himself into Ziggy Stardust and launch a career that would become one of the most successful and influential in the history of modern music,” says the book’s press release.

Check out some of the images below and see the book here.