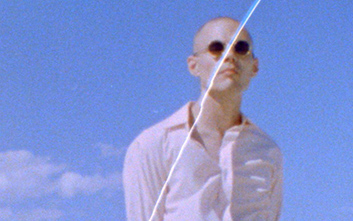 Swaying like every smooth leisure fabric you can think of, from one genre to another, Gonzo Jones deliver the goods on debut EP Misty Dream. I don’t want to bore you, but the definition of magnetism is as follows: a physical phenomenon produced by the motion of electric charge, resulting in attractive and repulsive forces between objects. It’s the perfect way to describe the latest enigma in Australian music, the character we know as Gonzo Jones.

Everywhere you look his music is labelled as “creep rock” and it seems perhaps the most appropriate term for his debut EP, Misty Dreams, out through Good Manners music.

Time, and time again you feel yourself drawn in, and then unsettled by this blend of dreamy pop, indie rock, and soft electronic sounds. Charming, then uneasy, and completely bent out of reality, Misty Dreams manages to seesaw and take a rest in different parts of your mind.

Prior to this successful solo introduction, Gonzo was known for helping out Aussie legends like Client Liaison, City Calm Down, and North East Party House. This time he’s a lone wolf; writing, recording and producing every inch of the record himself, and to great effect.

You can sense the creative freedom throughout the 7 tracks as he plays with all manner of sounds, and tonal shifts to create a diverse but ultimately smooth EP.

Although Gonzo has since admitted it hasn’t been the easiest, or cheapest task transferring the songs to a live format, his upcoming shows will tell the tale. Before that we have Misty Dreams to sink our teeth into, the opener, and title track for the record.

This song is a pure jam, and certainly one of the tracks that offers friendship, and embraces you. At least you think so until the slightly harrowing voice starts talking about going down the rabbit hole, and leads you to wonder, were the honey tones before just a sweet trap leading you to darker things?

The song talks about attraction, and that’s the thing about desire, it can be dangerous. Gonzo Jones nails the concept in what is a fantastic way to kick off the record.

Keep It Clean fails to follow it’s own device as it swaggers along, delivering some dank synths while Gonzo kicks his octave up a notch. The thing about this record is that every song seems to be an individual while also remaining linked to the others. Gonzo changes tack with his sounds, and voice throughout songs and yet they’re inextricably a part of each other, like multiple alter-egos of one personality.

Technicolour comes striding in about halfway through to confirm that Jones is in fact one cool cat. This song is so solid it’s almost edible as it swells with waves of sparking indie electronica.

This treat of a track somehow transitions, ever so easily, into the more languid Cigarettes and Silhouettes, which again perfectly encapsulates Gonzo’s concept of reflection. This track seems to be looking slightly inward, like someone talking to you with their back turned. You can hear them, but their words are as much for themselves as they are for you.

Jones closes the record out with Westwards, which brings us back to the creepin’ core.

Hideous cackling bringing us into the disconnected lyrics of Gonzo as he sings of a graveyard acid trip, while backed by some moaning. It’s an interesting piece, details what I’m sure was one of the more surreal moments of his life,  floating along somewhat unhinged, and totally disconnected from any real grounding.

All in all, Gonzo Jones has proven himself as a solo artist with Misty Dreams. It’s a record that plays with many elements to produce a magnetic blend of indie, pop, rock and electro that will twist and turn in your mind for quite some time.

If you like what you hear, be sure to check him out at his upcoming shows in July. He’s due to launch the EP at Hugs and Kisses, Melbourne, on the 9th .