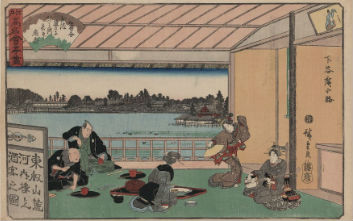 The Library of Congress has just added thousands of woodblock prints and drawings by Japanese artists to its online collection.

The beautiful collection includes artwork from 1600’s through to 1915. Among the Japanese renegades are Hokusai Katsushika, Andō Hiroshige, Isoda Koryūsai and Utagawa Yoshifuji.

There’s no better way to spend time than scrolling through the thousands of traditional woodblock paintings and drawings the Library of Congress has to offer.

“No one art form has done more to shape the world’s sense of traditional Japanese aesthetics than the woodblock print. But not so very long ago, in historical terms, no such works had ever left Japan.”

That changed when, according to the Library of Congress, “American naval officer Matthew Calbraith Perry (1794-1858) led an expedition to Japan between 1852 and 1854 that was instrumental in opening Japan to the Western world after more than 200 years of national seclusion. As travellers, materials, and products began flowing between Japan and the West, so did art.”

Check out the rest of the diverse collection on the Library of Congress website here.