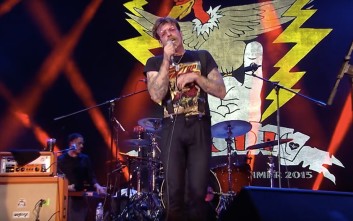 Eagles of Death Metal frontman Jesse Hughes stepped up a notch at the band’s show in Fremantle last night, proposing to his girlfriend Tuesday Cross on stage. Cross was invited onto the stage after the band finished their song Complexity, with Hughes dropping down to one knee and pulling out a ring. Cross said “yes” and according to The Music, could be seen at the side of the stage joyfully crying for the rest of the set. Although, it seems that Hughes had already proposed to Cross, posting an image in Instagram two weeks ago with the caption “I asked Tuesday to marry me……she said YES!”. Maybe this second proposal was the official proposal since he gave her the ring and all.

Hughes is a devout Christian, and has been ordained by the Universal One Church as a minister, having previously stated that he takes marriage very seriously.