Engineering the Sound: Pink Floyd's 'Dark Side of the Moon'
Skip to content
[gtranslate]
AS

From cutting-edge synthesisers and dense soundscapes to tape splicing, we delve into the making and recording of Dark Side of the Moon.

It’s hard to think of an album more celebrated and universally lauded than Dark Side of the Moon. Released on the 1st of March, 1973, Dark Side was Pink Floyd’s eighth studio album in just over six years.

On previous efforts, Pink Floyd had delved into crafting long, drawn-out musical suites – perhaps most notably on their 1971 album Meddle, which included the 23-minute long epic Echoes. Soon after the release of Meddle, the four members of Pink Floyd – bassist Roger Waters, guitarist David Gilmour, keyboardist Richard Wright and drummer Nick Mason – convened at Mason’s home to discuss a blueprint for another album – an album that would catapult the prog-rock band into the history books. 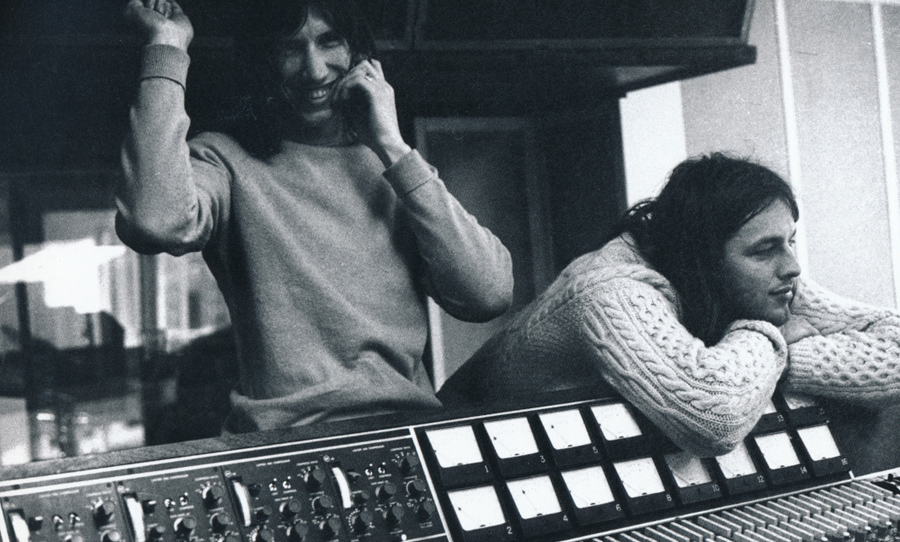 Fleshing out their grand vision

Expanding on what they had achieved with Echoes, Pink Floyd toyed with the idea of creating a concept album – a series of songs that bled into each other, all the while dealing with the madness and pressures of their rock ‘n’ roll lifestyle. Over the next year, the band toured extensively across Europe, Japan and the US during which they crafted tracks such as Breathe and On The Run – albeit featuring very different arrangements to their final recordings, and by early 1972, Pink Floyd were ready to record.

The band opted to record their new material at Abbey Road Studios in London, working with engineer Alan Parsons whose previous works included The Beatles’ Abbey Road and Let It Be. The band chose the world-renowned studio as it was home to, at the time, some of the most advanced recording technology ever produced – including the EMI TG12345 mixing console.

In contrast to the 8 and even 4-track recording systems Pink Floyd had used in past, the EMI TG12345 was able to work with up to 16 different tracks at once. This whole new arsenal of potential tracks opened many doors for the band; it not only meant that they could inject more instruments and sound effects into their songs, but they could also experiment with double-tracking vocals and guitar lines, greatly enhancing their already outstanding ability to create lush soundscapes.

One of the hallmark qualities of the LP is the way the tracks bleed into each other, with Parsons opting to execute this in a rather unconventional method. Instead of editing the tracks during the final mastering process, Parsons performed the edits right onto the master recording, carefully arranging the pieces of the musical puzzle and splicing the tapes together.

In a 2007 interview with Premier Guitar, Parsons divulged what it was like working with Pink Floyd on Dark Side of the Moon:

“The band members were experienced in the studio. They arguably were the most technically minded band out there. They knew what a recording studio was capable of, and they took full advantage. And they worked me hard—they always worked their engineers hard to push the barriers.”

While the EMI TG12345 mixing console played an integral part in shaping the development of Dark Side, the EMS Synthi AKS was perhaps the most advanced piece of musical equipment featured on the album, and was best put to use on dystopian instrumental, On The Run.

The EMS Synthi AKS was one of the first analog synthesisers to boast a built-in sequencer, allowing the user to input a pattern, alter the speed and fiddle with various parameters. In the case of On The Run, David Gilmour plays a simple eight-note arpeggio throughout the song, altering the resonance and applying a sweeping filter to create the unrelenting melody.

While Gilmour played the AKS on the track, it was Roger Waters who came up with the arpeggio that would go onto the final recording. In fact, Waters can be seen writing the piece in Pink Floyd’s film Live At Pompeii.

While the AKS is best put to work on the creeping notes of On The Run, the powerhouse synth also played a vital role texturally within the LP. Many of the sound effects such as the Doppler sirens and explosions scattered throughout Dark Side were created using the synthesiser. You could argue that without the AKS, Dark Side of the Moon would be a completely different beast altogether.

Another ground-breaking synthesiser for its time that was put to good use on the album was the EMS VCS-3. While used to piece together and process tape loops, the VCS-3’s rich, expansive sound quality was explored on several tracks, most notably on Any Colour You Like and Time.

The lead single from the album, Money, helped the band break new grounds as Pink Floyd’s first big commercial success in the United States. It is also best known for two unusual features – the song’s 7/8 time signature and of course, the opening tape loop of money-related sounds.

As outlined in the Classic Albums documentary for DSotM, Roger Waters created the tape loop for the intro in his wife’s pottery studio using a Revox A77 Tape Recorder. He recorded various samples, including coins clinking, paper tearing and a ringing cash register, then cut up the tape into seven sections of equal length. By splicing these pieces together, Waters created the infamous metronomic sequence that introduces the track and is known, still to this day, as one of the most innovative uses of tape loops.

From the aforementioned loop in Money to the chiming clocks in Time, the album features various unconventional soundscapes and samples. The album begins with the sound collage of Speak To Me – an overture that begins with a faint heartbeat (produced with a heavily-processed bass drum) and contains samples from every track on the album as well as a reversed piano chord by Wright that leads right into the next track, Breathe.

David Gilmour’s guitar set up was much more elaborate than it had been when recording previous albums. Utilising his 1969 Fender Stratocaster for the majority of the songs, Gilmour also used a 1970 Strat for songs such as Brain Damage, as well as a custom Lewis guitar with twenty-four frets to achieve the high-pitched squalls of his double-tracked solo on Money.

Recording with a Neumann U87 (with the occasional use of a U86), Gilmour’s amp setup included a Hiwatt DR103 All Purpose 100W heads and a Leslie Speaker, best put to use on the swirling chords of Breathe. As for pedals, Gilmour utilised various reverb units as well as a Uni-Vibe, a Binson Echorec and an EMS Synthi Hi-Fli, utilised to create the twangy auto-wah on Any Colour You Like.

In a similar way, Richard Wright’s keyboard arsenal greatly expanded as the recording progressed. Aside from the previously mentioned VCS-3, Wright also added a Wurlitzer run through a wah-pedal, heard throughout Money. Wright also incorporated Minimoogs throughout the album, a Fender Rhodes in Breathe and a Hammond organ for the dramatic closing track, Eclipse.

Dark Side of the Moon is also defined by Nick Mason’s standout drumming, with his seven-piece Ludwig kit featuring little to no compression applied, resulting in an airy, natural quality. While delving into tape loops and effects, Mason also utilised roto-toms for the first time in the band’s career, featured in the chilling and dramatic opening to Time.

Finally, Roger Waters’ bass set was pretty straightforward – a Fender Precision Bass with a Charvel maple neck and a set of Kluson tuners. Featuring some of his most inspired basslines, Waters’ heavily relied on his trademark plucked, subdued tone, while experimenting with warm, growly tones buried low in the mix, such as on Us And Them.

Much like Gilmour’s guitar solos, many of the vocals throughout Dark Side of the Moon were double-tracked for a fuller, richer sound. Gilmour, Wright and Waters recorded their harmonising vocals into a Neumann U47 for the majority of their vocal takes. Many of the vocals throughout the album were heavily treated with reverb and delay – in fact, Parsons would have up to five or six different tape machines going on at one time.

Yet the most memorable vocal track on Dark Side of the Moon didn’t come from any of the members of Pink Floyd. During the recording of The Great Gig in the Sky, Parsons suggested collaborating with session vocalist Clare Torry, who he had previously worked with. Stopping halfway through her third take, the band spliced together Torry’s emotional, nonsensical vocals to create arguably the most haunting song on the album.

Dark Side also saw a significant maturation in Roger Waters’ lyrics. What started off as an introspection of the rock ‘n’ roll lifestyle became a complex and thorough examination of the human condition, exploring universal themes that anyone and everyone could relate to.

Beginning with the mundane nature of everyday life (Breathe) before delving into the elusive nature of time (…Time), the album also explores greed (Money) and the senseless nature of war (Us and Them). It also explores the ideas of mental illness in the song Brain Damage, heavily influenced by the departure and declining mental state of founding member Syd Barrett.

45 years on and Dark Side of the Moon still sounds as ground-breaking and fresh as it did back in 1973. With its fusion of relatable themes on humanity, combined with rich sonic landscapes, innovative recording techniques and inspired virtuosity, it’s an album made for the world – and has long been beloved by it.