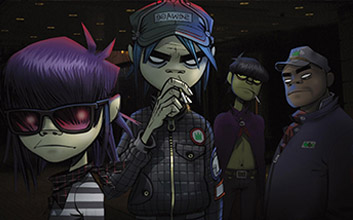 From his legendary comic series, Tank Girl, to co-founding and creating the visual identity for Gorillaz, Jamie Hewlett has had an illustrious career to say the least. Gorillaz co-founder and visual mastermind Jamie Hewlett to release career-spanning art book with over 400 of his artworks.

Now, he’s is receiving his first major monograph, Inside the Mind of Jamie Hewlett, a incredible collection of more than 400 of his artworks including strips and sketches from his work for Tank Girl and Gorillaz, and works from his Chinese contemporary opera exhibition at the Saatchi Gallery show in 2015 and more.

The blurb for the book reads:

“With influences ranging from hip hop to zombie slasher movies, Hewlett emerged in the mid-1990s as co-creator of the zeitgeist-defining Tank Girl comic. With then-roommate Damon Albarn, he went on to create the unique cartoon band Gorillaz, a virtual pop group of animated characters, who have recorded five albums and mounted breathtaking live spectacles.

Through stories, characters, strips, and sketches, we trace Hewlett’s exceptional capacity for invention and celebrate a polymath artist who refuses to rest on his laurels, or to be pigeonholed into a particular practice.”

The book is out through Taschen, and will be released very soon. See here for more details. And check out some of the content below.