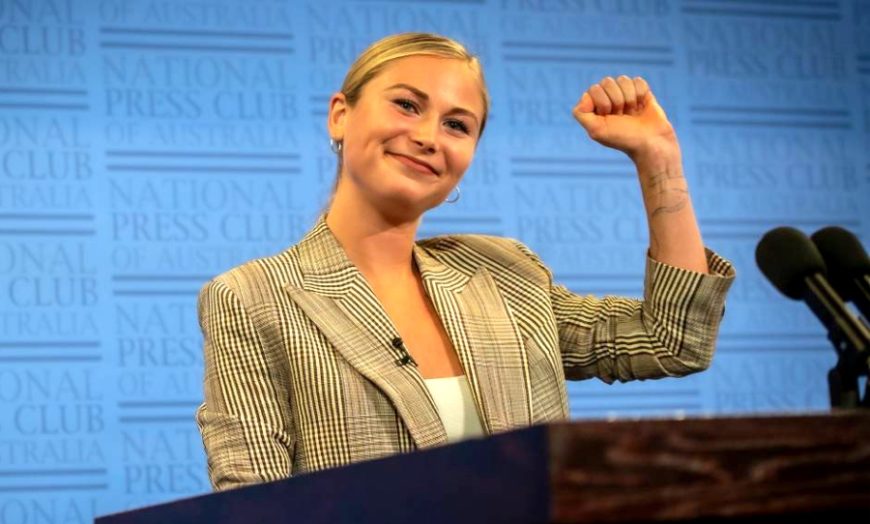 Activist Grace Tame has called out the PM in response to the elevation of accused rapist and cabinet member Christian Porter.

Tame’s response came after accused rapist Christian Porter was offered the position of Acting leader of the House of Representatives, despite being stood down from his previous position due to sexual abuse allegations.

“In light of my own experience, it’s hard to process how an accused rapist – albeit one who will never face prosecution – could be offered one of the highest positions of power in the country by none other than our nation’s leader,” wrote Tame.

“It isn’t just Porter’s character that’s in question here, it’s the morality of our current leadership.”

In February, it was reported that Christian Porter had been accused of raping a woman in 1988 and his alleged victim died by suicide in 2020.

Porter denied the accusation and said that he would not stand down from his positions of Attorney-General, House Leader and Industrial Relations Minister but would take leave to recover his mental health.

“Last week I had what I thought was a productive meeting with the federal government, and now this has happened,” said Tame.

Porter has been temporarily elevated to Leader of the House while Peter Dutton has to quarantine amid the Queensland COVID-19 outbreak.

Tame said that the decision for Porter to step into the role “reeks of abuse of power” and is “a blatant disregard of the people“.

“In particular, this appointment is an insult to all survivors, and indeed the whole country. It reinforces the idea that accused predators are too often protected, feeding into the already crippling fear of victims and bystanders. It is an act of emboldening perpetrators.”

Accused rapist Christian Porter has been named Acting Leader of the House, despite not being the Deputy who would typically fill the role.

This position is embedded with the power to stop debate; to enforce silence; to suppress truth.

Grace Tame makes it very easy to understand why appointing an alleged rapist to Leader of the House isn’t just an oversight. It’s a very pointed message to women in this country that the men are in charge. @TamePunk https://t.co/FWjGECvCgg pic.twitter.com/gs8uUDrgoH

The announcement is a huge setback in the Prime Minister‘s bid to clean up parliament and support assault survivors.

Before the report of Porter’s alleged assault, Liberal Party junior staffer Brittany Higgens alleged that she had been raped by a male colleague in 2019.

The Prime Minister denied any knowledge of the assault until Higgens came forward.

The Brittany Higgins allegation being made a political football deliberately is now bordering on absurdity. We know the govt knew straight away. We know they destroyed the crime scene. We know they hounded Brittany & her partner out of a job. We know elements of MSM are in on it.

The Prime Minister also ordered an internal review of workplace culture and complaints handled within the Liberal Party.

Deputy Secretary Stephanie Foster was asked to undertake the review.

Replying @BreakfastNews you show us some grubby Yank politician who’s been accused of being a deviate. Morrison appoints an alleged rapist Porter as temp leader of the house, the great strong, Ms Grace Tame writes an eye opening article on it SMH, and crickets WHY..?? 🦗🦗🦗

Foster found that the existing human resource management system failed to set clear standards for MPs and staff, was not accountable, and lacked an independent complaints mechanism.

The Morrison Government accepted all findings from the review and have decided to adopt an independent complaints process.

Higgens said that an independent complaints mechanism would: “ensure Parliament House is a safer workplace for all future employees“.

In Grace Tame’s statement, she questioned the progress of the campaign for a safer Parliament, saying: “If the Prime Minister’s recent rhetoric about wanting to support assault survivors and protect women’s safety was indeed true, he would surely go to any lengths possible to ensure there was not an accused rapist amongst his own staff.

“Clearly, it has been nothing but lip service. His actions speak volumes that drown out his every word“.

“Demonstrative actions at the apex of influence…have a dangerously permissive effect on future corruption whilst simultaneously stifling progress,” added Tame.

“My heart breaks at the thought of survivors still living in silence, looking to our leaders for hope.”

Grace Tame. You are fucking brilliant and we stand beside you and for you and with you. Than you for writing this. Nailed it. #GraceTame #auspol #ScottyTheMisogynist https://t.co/evBoUkKfw9

The anti-vaxx brigade get more media attention in one sitting than all the women who marched across Australia in support Brittany Higgins and against sexual assault. Yet – that was silence pretty quickly.