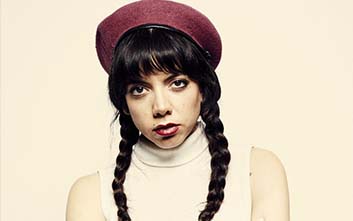 Since ’07, Bronx-bred Alynda Segarra, has been utilising her melty, folk vocals and storytelling prowess to make statements about the world we live in, getting her message across loud and clear with the help of her New Orleans based band Hurray for the Riff Raff.

Throughout their time together the band have experimented with a multitude of sounds and themes inspired by the American South, from bluesy folk focusing on drug addiction and heartache, to a folk pop concept album addressing life in the big city. The Riff Raff are breathing new life into genres considered otherwise a thing of the past by the mainstream.

Needless to say, the list of must-hear Hurray for the Riff Raff songs is a long one, but ahead of their upcoming shows around this year’s Bluesfest, we’ve put together a list of five of their best tracks to get you properly acquainted with the band before you drift off into their dreaminess this March. Need to do your homework on Hurray For The Riff Raff? Before you hit up Bluesfest 2018, count down these 5 essential tracks.

Daniella is an all too relatable track that centres on longing for the love of someone who’s already with a not-so-spectacular other.

Laced with lap steel, tambourine, banjo and harmonised whistling, the premise of the song isn’t uplifting but it’s packed full of fervour, and features one of the most endearing opening lines Segarra has written; “Daniella, why you with that fella?”

Segarra’s ever yearning pleas for Daniella will be stuck in your head for days.

For even the most prolific musicians, to cover John Lennon is to take a big risk. Lennon was one of music’s greatest visionaries and most have failed to capture his authenticity and spirit in their covers, but Hurray for The Riff Raff are not one of those bands.

In their cover of Jealous Guy Segarra’s hauntingly delicate vocals are luminous, taking on the song with a fresh albeit similar approach. Against all odds, the band manages to pull off a must hear cover for all Lennon lovers and Riff Raff fans.

Throughout many of the Riff Raff’s tracks Segarra flips expected gender roles, choosing to sing from a male perspective. Slow Walk is one of the greatest examples of this.

With fiddle, banjo, and quiet harmonies, it’s a stomping, slow riding roots tune that one could expect to hear in a NOLA bar.

Good Time Blues is a beautiful, melancholy folk blues that explores the notion of being so down and out that better days seem like a distant dream.

Somehow, despite the sadness and desperation in the song’s lyrics, Good Time Blues ends up feeling hopeful.

Hurray for the Riff Raff’s latest LP Navigator is an album that’s riddled with introspection, maturity, and astounding lyric work. Pa’lante, Spanish slang meaning ‘forward’, is a devastatingly heartfelt, piano orientated track that speaks of navigating through life and rolling with the punches.

Although structurally reminiscent of the Beatles’ A Day in the Life, Pa’lante is a unique, straight from the soul comment on today’s world, a song encouraging people to move forward despite it all.

With Pa’lante Segarra proves yet again that she’s one of the most important songwriters in music today. A powerful song from a band that deserves to be heard by all.

See Hurray for the Riff Raff live in Australia: