Inscryption by Daniel Mullins Games takes players on a tense, intricate card game journey, all while sitting in their assumed kidnapper’s cabin.

The horrific sound of a door’s creaking invades your ears. A pair of large, beady eyes open slowly, only to stare right through you. Shrouded in darkness, all you can see is that unnerving gaze sitting just across the table from you. “Perhaps you’ve forgotten how to play this game.” It speaks, although without an actual voice, and begins teaching you how to play.

Inscryption thrives off of ambient tension, strategy, throwing you curve balls, and leaving you intrigued by its inventively delivered storyline. At first glance, one questions how ‘scary’ a card game can truly be, but somehow Daniel Mullins Games has managed this feat. Featured in Steam’s October Next Fest, Inscryption released on the platform today and I’ve had the opportunity to take a good look at it already.

The very basics are taught to you by the mysterious figure across the table whose face is almost always obscured by darkness or masks. He serves as the perfect antagonist, taunting you with sardonic comments, insults, or sheer disappointment whenever you fail. He even acts genuinely surprised when you succeed.

Once you understand the basics of the card mechanics, he carries on with a nonchalant tone saying, “Let me recall your story. Oh, yes, you were lost deep in the forest”, showing just how little these games mean to him. Except, your life is on the line. Represented by a pair of candles, you only get one loss in a game before this mysterious figure snatches you up.

Squirrel cards act as a source of sacrificial blood to summon stronger cards such as wolves. A scale to the side of the table shows just how much damage you’ve taken, or inflicted, and when it tips to one side entirely, you win or lose the round.

Progression is shown on a map after every game, where you take a step forward with every successful round. Here or there, extra cards, chances to bolster your other cards with sacrifices, traders and other little boons show up.

There’s even opportunities to grab some particularly useful items; a pair of pliers, creatures kept in bottles, or scissors to cut up your opponent’s card. What are pliers for, you may ask? Well, pulling one of your teeth out inflicts a single point of free damage to weigh the scale down further. Gruesome, but effective.

The trader can prove incredibly useful, offering specific creatures to add to your deck, and allowing you to play a little more strategically. Or there’s the woodcarving woman, who can help you assemble a totem, giving certain creatures an extra attribute. The rules in Inscryption aren’t written in stone exactly. They’re bent by both you and your faceless antagonist as you go along. But the more consistent ones are fairly easy to follow.

Luckily, there’s a handy little rulebook available to help you keep up with it all. Filled with an explanation for most of the different abilities of certain creatures, you can take a peek at almost any time. That said, it isn’t the easiest thing to navigate outside of playing the game and might benefit from a ‘contents’ section. But otherwise, simply right-clicking a card with a special ability pops the book open, complete with the corresponding explanation.

The serial killer vibes are real

Speaking of navigating outside of the game – you can. Whenever the map is rolled out, you’re free to stand up and take in your surroundings. This is where Inscryption’s ambient, creepy atmosphere really starts to kick off.

Trapped in a cabin with only a single door, you’re free to poke and prod at the oddities around you. A cuckoo clock can be toyed with, a locked drawer beckons you to find its key, and a human skull provides you with useful teeth to spend on more cards. So much more lays hidden in your spooky surroundings and almost everything relates to a puzzle in some way. It’s up to you to solve them and reap the rewards.

But not every encounter is going to be rewarding. The first time you lose, your faceless ‘friend’ tells you that “Using this as a learning opportunity may be the only way to mitigate [his] disappointment.”

A second loss means that you will die and that he “must sacrifice you”. When you do, he reaches over the table slowly, hands outstretched, and the screen fades out. Only for us to reawaken just outside the door spotted earlier in the cabin.

I can’t tell you how creepy it is to be greeted by my assumed murder, camera in hand as he looms in the doorway. Worse, “before you expire”, he wants a bloody memento. “Your very own Deathcard”. One that you’ll actually be able to play once you start over. Chilling.

So you might be wondering, where’s the actual story? Trust me when I say that Inscryption is somewhat ingenious, perhaps not in writing, but its innovative delivery. The cards themselves are characters – or some of them at least. The first you’ll run into is the Stoat, who offers some comical relief from the constant barrage of jabs, by throwing them back at our faceless ‘friend’. Calling our antagonist “completely insane” definitely earned a smug smirk from me.

Dialogue for the Stoat is given by using the title of its actual card. Its name is constantly replaced by sarcastic commentary and sometimes, a gentle nudge in the right direction. The Stoat even serves as something of a mirror to you, the player. You’re both trapped and your faceless, mutual ‘friend’ likes to “watch [the Stoat] suffer”, not to mention you too.

It ultimately leads you towards your escape, saying that “there’s a way out for both of us”, so keeping this newfound friend close is your best bet. Though it does advise you to “just play along” in the meantime, no matter how infuriating that might be.

Inscryption’s unique spin on card game mechanics is also one of my favourite parts of it – especially as an avid player of Magic: The Gathering. Different strategies are needed for every iteration of the game and special abilities prove tantamount to start learning and countering others as you go. Putting together a workable deck with what you can manage to find is honestly half the fun of this creepy journey.

Couple that with the consistently chilling atmosphere, the neat story woven into your escape, and the immersive puzzles? I can safely say that I’m in love and determined to reach the end. The dialogue of each character is like icing on the cake for it all.

The music is dark and creepy, the style of the animation matches it, and the mechanics just go the extra mile with establishing this as a successful, psychological horror game. Of cards!

If all that wasn’t enough, Inscryption’s developer, Daniel Mullins somehow managed to create this quirky card-game as a one-man team. A feat I have to commend.

Inscryption is available now on Steam. 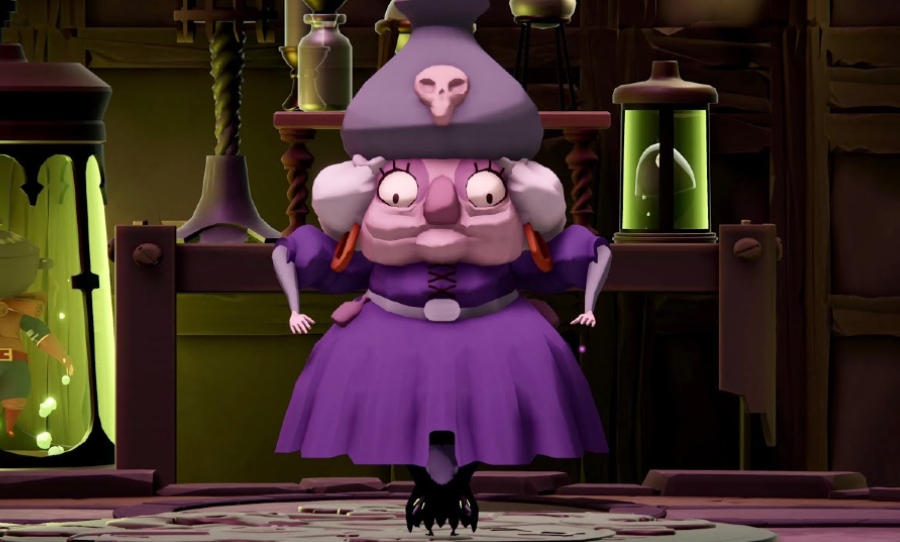