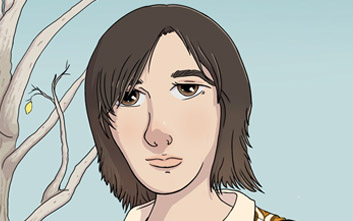 Long Island natives The Lemon Twigs cut an impressive debut with 2016’s Do Hollywood. Having recorded with Foxygen’s Jonathan Rado, it may not come as too much of surprise that group share their producer’s passion for burnishing inspiration from forgotten gems of pop’s past.

Nailed to the floor by an undercarriage of slick songcraft, the Twigs traverse six decades of popular music in a little over 40 minutes. With the group hitting up Aussie shores for Splendour in the Grass, we had a chance to talk with Brian D’Addario about Ariel Pink, “retro rock” and growing up with a songwriting dad.

HAPPY: You recorded your debut album, Do Hollywood, with Jonathan Rado from Foxygen. What was it like working with Rado?

BRIAN: Oh it was great! It was really probably the most fun I’d ever had in my life.

HAPPY: So Rado’s a fun guy to record with?

HAPPY: When I talked to Sam France from Foxygen earlier this year, he mentioned this affinity he has with The Lemon Twigs alongside other groups like Whitney and Alex Cameron, all these guys who Rado works with really. Do you feel like you’re part of some kind of larger movement?

BRIAN: Yeah, they’re usually just people that I like you know? I think Rado has good taste. He’s also got very specific tastes. I think there is a similarity between these things that he likes, but I don’t think that it’s THAT similar.

HAPPY: So you feel more like you’re doing your own thing and he’s just more of a common element?

HAPPY: When I show other people your stuff, say I share it with ten people, five people will absolutely love it and there’ll be five others who’ll be like: “What is this?!” Retro music seems to polarise people a little bit, why do you think that is?

BRIAN: Well people don’t like quote unquote “retro music” because they don’t like rock music. Rock music is at this point that, like classical music, it is what it is and the more you try and freshen it up for modern times the less it becomes rock music. I don’t know what people’s reasons are, but I feel like when people say “retro” it’s sort of redundant.

HAPPY: I think that, in 20 years’ time, some stodgy academic will have a term for what’s going on with rock music right now. I guess it could be like you’ve said, maybe people are too caught up with this idea that rock has to continually push outwards from its established form…

HAPPY: Is there an overarching goal you’re working towards as a group?

HAPPY: Why do people become worse?

BRIAN: Maybe because they get really popular and they’re trying to sell more records. But for The Beatles the better they got the more records they sold, so you begin to feel that maybe the two things are intertwined in some way, although they’re not always.

HAPPY: Do Hollywood came out via 4AD, a label with a really long tradition of championing weird and left-of-centre pop. Do you have a favourite 4AD artist or group?

BRIAN: I think Ariel Pink is probably my favourite 4AD artist and The Pixies are probably number two.

HAPPY: I understand your dad, Ronnie D’Addario, did some songwriting in the 70s and 80s. What exactly was he doing? Was he a tin-pan-alley sort of guy?

BRIAN: He was a session musician and he also worked as an engineer at a studio. I think primarily he was an engineer, but also did session work and then at home did songwriting. He had a couple of opportunities to breakthrough throughout the 80s and 70s and stuff, but he didn’t really get his due in my opinion. But he was always working in music. That was always his job in some way.

HAPPY: Is there anything he’s done that really speaks to you or is it a ‘too dorky to like what your dad’s into’ sort of thing?

BRIAN: For a long time I had never really taken any interest in his music. I mean, I liked it, I thought he was good, but when was 16 or 17 I discovered these first albums that he had done where he was playing all the instruments. It was stuff that I had never heard before and I just thought it was amazing! He’s just a really good songwriter and it doesn’t really have anything to do with him being our dad, I mean that makes me happier about it I guess. But he’s just really a good songwriter. His first couple of records are great and he’s managed to write consistently good songs throughout his life.

HAPPY: Has he been getting a bit more attention since you guys have been putting out music?

BRIAN: Yeah he has.

HAPPY: Is he happy about that or a bit embarrassed that people are dredging up these old recordings?

HAPPY: Coming out of Do Hollywood do you have any idea where you might go next? Do you think you’ll return to a similar sound?

BRIAN: We always strive to write better songs. We don’t try to do anything more than that. But we’ve seen things that we could have done differently on the first record and we’re putting that into the next thing.

HAPPY: So more from a technical perspective?

HAPPY: So things would be a little amiss if we didn’t leave off mentioning your upcoming Splendour appearance and sideshows. How are you feeling about coming out?

The Lemon Twigs are making their way to Australia this July. Find their run of dates below, or head to their website for the finer details.