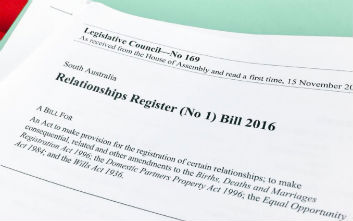 This comes in response to the death of British man David Bulmer-Rizzi on his honeymoon to Australia. To add to the tragedy, his husband Marco was told the death certificate would read “Never Married” because the state of South Australia didn’t recognise their marriage. The South Australian government has passed a bill that acknowledges overseas homosexual marriages and introduces an official register for same-sex couples.

Last week, South Australian premier Jay Weatherill made a formal apology to all LGBT people and vocalised his support for the bill.

“I want you to know that who you are is OK and that you are a welcome part of the broader South Australian community” he said.

The bill essentially grants “many of the rights afforded to the opposite sex couples”, including next-of-kin status and the ability to have their marriage legally recognised even if the ceremony was carried out overseas.

After 11 months of campaigning, Bulmer-Rizzi has expressed his relief with the decision, saying “It’s as close to happiness as I can be – I am the happiest I’ve been in the last 11 months.”

The news is definitely something to be celebrated, of course any progress is good progress. However, it’s hard not to dwell on the fact that the bill doesn’t grant equal rights. Inequality is still rearing its ugly head.

But at least SA is making the effort, which is more than we can say for NSW. Its time to step up, Mike.

The work done by Bulmer-Rizzi has definitely paved the way for future activism. “I think David would be proud of me” he says.