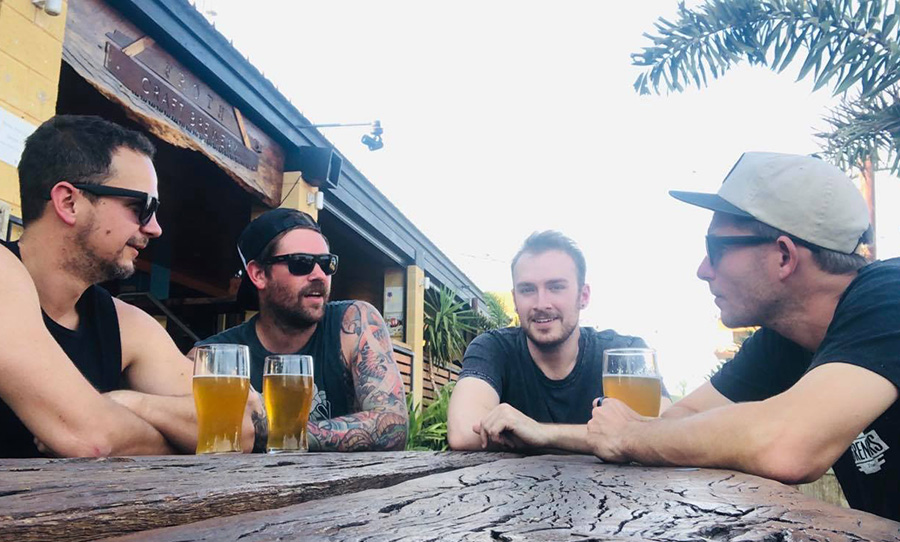 If you still haven’t allowed yourself to be blasted by Catalepsy, the latest single from Lo-Fire, stop what you’re doing and go listen to it now. The track is a barrage of blistering garage, and we’ve had it spinning on repeat ever since we first laid ears on it.

So, fresh off the tune’s release, we caught up with the band to chat all about it, coronavirus, and what the future holds.

With an epic new single hot off the press, we caught up with Perth-based outfit Lo-Fire to chat all about it.

LO-FIRE: Hey, I’m going good! Well, Lo-Fire’s been quiet because of these quarantine laws, but hopefully we’ll be back in action soon enough. In the meantime, I’m completing puzzles and trying not to sneeze on anyone.

HAPPY: We’re loving the new single! How does it feel having out there in the world?

LO-FIRE: Yeah, it feels great! Originally, the release was going to be accompanied by a video, but shooting that became impossible once ol’ corona reared its ugly head. Still so stoked with getting it out there, Tristan Sturmer did an awesome job with its production.

LO-FIRE: I guess Catalepsy is about taking a step back and trying not to overthink things. Sometimes it’s good to let things take their course. I guess its easier to take risks that could potentially be beneficial if you aren’t over analysing them so much.

LO-FIRE: Yeah, I think definitely we were at a stage where we were constantly evolving, but for now I think we’ve settled on a formula that works for us. Our sound has changed so much since the first EP we recorded with Angus before he joined the band on lead guitar. In saying that, it’s important to never stop learning, so I’m excited to see what we will sound like in a few years time.

HAPPY: You’ve released a few singles over the past year… did you approach the writing/recording of these tracks differently at all to past material?

LO-FIRE: Catalepsy went much the same as our last couple of releases. I usually come up with the main rhythm guitar parts and some of the vocal parts, and present it to the other lads at a jam session, and we sort of hash it out from there. Most of our favourite songs have come to life in less than an hour at Pen Cap Chew Studios. But yeah, we all gel really well this way so we approach most of the songwriting the same way each time. Don’t fix it if it ain’t broke!

HAPPY: Are these singles a taste of something bigger to come? An album perhaps?

LO-FIRE: We’ve actually developed quite the archive of songs since we’ve started out, but we’re still not sure how we feel about an album yet. It’s a hard market these days, I guess we’re still at the point of getting our name out there and trying to play as many shows as we can. But we wouldn’t rule it out, no way. Releasing an album would be all-time!

HAPPY: Are there any other artists that you’re really digging at the moment?

LO-FIRE: I’m really digging a band called Muskets from the UK at the moment (play a show with us pls). They have a handful of songs out at the moment and they’re all quality. But otherwise, I’m still stuck in the nineties and noughties. It’s the usual suspects more often than not for me, could be a lengthy list…

HAPPY: What’s next for Lo-Fire? Any other exciting plans in the works?

LO-FIRE: Well, I think just getting back into the rehearsal studio will be our priority at this point, but shooting the video for Catalepsy is definitely still on the cards. Other than that, very keen to see all the Perth crew out and about again and playing some shows.

LO-FIRE: No worries, thanks for having me.