Devolver Digital’s new roguelike Loop Hero takes the genre and turns it on its head. Simple in appearance but deeply complex, here’s everything you need to blitz Chapter 1.

Loop Hero does a great job at dropping the player right into its gameplay with little-to-no instruction on what to do. The game appears simple on its surface, however the mechanics that control the game go much deeper than you may think.

Luckily for you, we spent our weekend plugging away at the game and we’re here tell you everything we learned from Chapter 1 and its skeletal boss, the Lich. Loop Hero is a roguelike that ties a lot of different gameplay elements together. It has a bit of deck building, resource management, and city planning, all wrapped into a neat little experience.

I’m writing this guide under the assumption you’ve played the tutorial, but if you’re impatient like myself, I’m sure you skimmed over some important details. I’ll explain those mechanics in this section.

Loop Hero features a day and night system. If you look at the top left side of your screen, you will see two progress bars. The one on top will show you how far in the day you are. When the day cycle ends, you will regenerate a percentage of your health as well spawn new enemies.

Just below that bar is the boss spawn meter. Once this meter fills up, the boss will spawn at your camp, which is where your loop begins. The more cards you place, the quicker your meter fills.

Early on you will want to be strategic with your card placement. I’ve dedicated a whole section to card placement below – but first, some groundwork.

The more enemies you defeat in Loop Hero, the better gear you will get. Equipment has two signifiers of value: firstly its level (signified by the number on its picture), and secondly its rarity. Just because an item is of higher rarity, it doesn’t necessarily mean it’s better for your build. You’ll need to make that decision based on your class and build.

Equipment works a little different in Loop Hero than in other games. Once it’s equipped, you will not be able to unequip it. If you want to replace an equipped item you can, but that will destroy the item.

Equipment will slowly but surely fill up your inventory – you have limited slots and there’s no way to drop equipment. If your inventory reaches max capacity, the oldest piece of equipment in it will be turned into resources to make space.

Combat and travel happen automatically in Loop Hero. When entering an engagement, your character will autonomously begin attacking the nearest enemy. You can pause the combat by hovering over the enemy to check their stats, or by adjusting your equipment halfway through the fight.

After defeating the enemy, there’s a chance either cards or equipment will be dropped. The more enemies you kill, the better loot you get.

A brief explanation of cards

There are different types of cards in Loop Hero. Each card has a different effect, such as spawning a new enemy type or providing health buffs to the player. Some cards also have different synergies when placed in the vicinity of one another.

For example, a 3×3 square with mountain and stone card placements will turn into a mountain peak. This change offers the player improved healing. Meadow cards placed adjacent to different cards will transform it into a blooming meadow which offers increased healing.

Treasury cards are very powerful cards, but be careful with your placement. Once placed, you gain one extra random resource for every card placed adjacent to it. The more you place, however, the higher chance of gargoyles spawning. Treasury tiles also grant better resources the further along the run you are, so make sure not to place them too early.

It’s important to note that you shouldn’t place every card you are dealt. If you do this, you run the risk of quickly overwhelming yourself and losing all your resources.

When you finish a run in Loop Hero, you take the resources you’ve gathered back to camp, where can use these resources to upgrade your camp or build new areas. These improvements unlock new cards and equipment that will help you progress further.

Of course, how you finish the run is extremely important:

It’s therefore much better to retreat for your first few runs and focus on upgrading your camps before you take on the first boss. If they spawn and you don’t feel ready, you should definitely quit while you’re ahead.

Once you’ve returned to camp, you can use your hard-earned resources to spruce the place up a little. The first two encampments you’re going to want to build are the herbalist hut and the field kitchen.

The herbalist hut will grant players a healing potion which they can use in their run, an incredibly valuable tool. The field kitchen will provide players with an extra 10% healing buff when passing through the cosy camp tile.

You can also upgrade these encampments to improve their buffs.

Players can place cards in certain combinations to unlock new enemies and new effects. Defeating new enemies can also grant new cards, which the player can use for more complex combos. A combination can be created with as little as two cards, however, some more advanced combinations will require up to five.

Some combos can be placed in any order and pattern, however, some need to placed in a certain way to unlock their effects. Below I’ve outlined some of my favourite combos I’ve learnt so far. 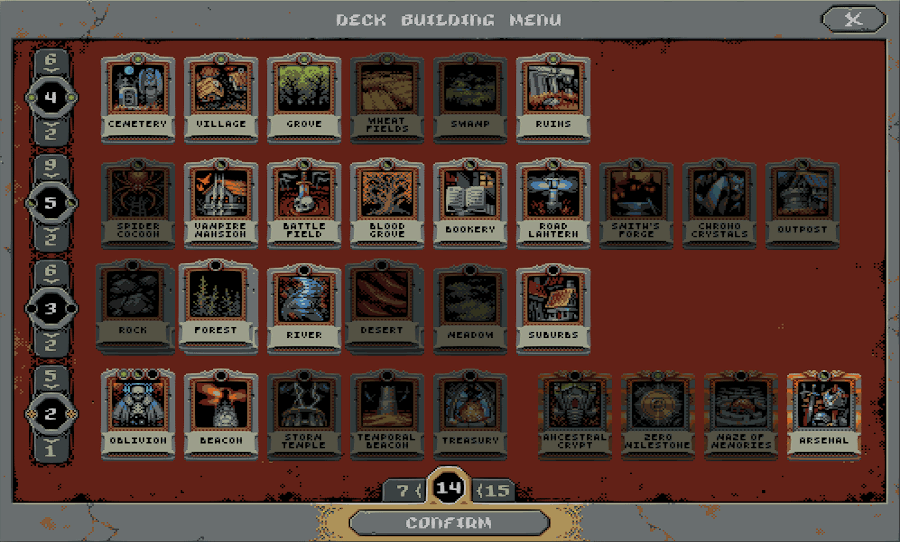 Count’s Land: Place a vampire mansion card next to a village card. This will change the village into a ransacked village. This new tile will spawn ghoul-type enemies as well as more vampires. If you can survive three loops, the ransacked village tile will turn into a count’s land tile. This tile will grant the player 135hp every time they walk past it.

Bloody Path: This is a great combo for early game and also very simple to create. Place two battlefield cards next to each other and you will create a bloody path. This will spawn enemies called blood clots who are incredibly easy to beat. These enemies also drop some great loot, so definitely do this one.

Shipwreck: If you place a battlefield card next to a river card it will create a shipwreck. The shipwreck will spawn chests which the player can fight to gain better equipment. Be wary, this card will summon sirens to the map. The Lich is the first boss you encounter in Loop Hero. Here are a couple of tips on defeating them:

Firstly, you are going to want to horde oblivion cards. Right before the fight, use all the oblivion cards on the Lich Palace tiles. This will destroy the tiles and weaken them. The Lich gets a 5% stat buff per tile and a total of seven tiles spawn, meaning the Lich will be 35% stronger if you don’t do this.

You’ll also want to be as prepared as possible before fighting them. The Lich deals magic damage, so you will want to stack resistance against this. The second best stat to build against the Lich is evasion – try to get your total stack to around 30% and you shouldn’t have any issues beating them.

Once you beat the Lich, you’ll unlock Chapter 2 of the story. Stay tuned for our guide to that here.