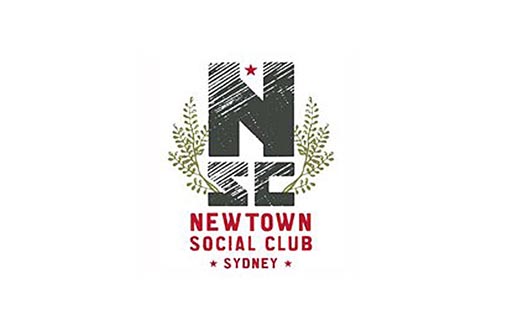 As I arrived to review Newtown Social Club’s (NSC) 1st birthday mini festival last Sunday something came to mind. It’s not about the bricks and mortar but the community attachment that instils meaning on a building. A church with no congregation is just a stone building with windows depicting scenes of malnourished metal heads in loin cloths pointing at each other.

The Hopetoun Hotel was just a shitty pub on a corner in Surry Hills but to many it was the heart of music in Sydney; an incubator venue supporting talent across its staff and its stage. The building stands there the same today as the day it closed but we feel nothing for it. It’s dead to us as we are to it. I spent last Sunday surprised by how many comparisons I could draw between the long gone and oft forgotten Hopetoun and Newtown Social Club. Something I’ve never been able to do before. What better way to celebrate Newtown Social Club’s first birthday than getting pissed and soaking in sweet bands?

This flowery piece is at its core a review so I feel like I should actually REVIEW. If I could liken the blogs in this country to a dessert it would be a big bowl of 10 different brands of custard, all beige and unidentifiable with the nations music listening population represented by little gummy bears all sinking to their deaths into a thick sweetened sea of inoffensive non-opinions. So I promise I will review. I will give things ratings. Securing a photographer to join me on this journey was difficult. On my first submission for a budget to hire one the scaly powers that be at Happy were less than impressed and I was whipped, not once, not twice, but thrice for the suggestion.

Not sure whether it was the beating or the residual smell of sulphur in my lungs from being in the presence of pure evil but with my senses impaired I came up with the plan that I would document the night on my iPhone. Would have been a great idea apart from the fact that every time I tried to take a photo of a band, an actual photographer with an actual camera and pockets lined with actual money kept on getting in my shots. I’ve chosen a select few for your viewing pleasure below.

Sadly I missed watching The High Ceilings but I managed to catch Prints and everything from then on on both stages. In the downstairs bar we had solo acoustic performers (ala Old Sando) and upstairs full band set up in their 300 capacity band room. Prints delivered their Interpol-esque brand of brit-indie with the confidence of a band progressing well.

While not sonically adventurous they would be a promising act once their singer properly develops his full vocal register and they start to establish some unique elements. Rooms followed them on the main stage bringing their vibey electronic set up with them. Only a handful of shows deep Rooms are a band that are destined for some interesting things. The set felt a bit ill-thought out with endings of songs being abrupt and clunky when they could surely glide together but for a band so young these things can be excused.

At this point it’s only appropriate that I do my first actual review of this “review”. Contextually it’s an important stage of the night because it’s at this point I discover something.

Notes: Next time hide your three cases of Sailor Jerrys in a room with a working lock guys. With a newly found lust for life due to the nautical bounties swilling around my belly I ventured downstairs and caught Ben Horder with his pleasant acoustic stylings and bounced upstairs to watch Good Counsel with whom I was thankfully warned were Sydney band Thieves reinvented. With an almost full band room Good Counsel ran through their set of lyrically driven rock music with the chaotic energy that instantly won over the crowd. There were guests on stage, there was a guitar thrown down at the end of the set, there was passion, there was a lot of booze in my belly. Some might have mistaken me for someone having a really good time. After their set I went to relieve myself and decided it was also time for another review.

Notes: Unisex toilets done well – I felt like I was in Ally McBeal minus that pouting anorexic witch. Julia Jacklin played downstairs with her husky tones and her tele followed by the crowd Andy Golledge… Or maybe it was the other way round. Keeping track at times was difficult because there was always something to do, always something to see, always Sailor Jerrys to steal. The curiosity of the day for me was definitely The Maladies.

The last time I saw this band play was actually on the stage of the Hopetoun Hotel all those years ago. After a long hiatus I was eagerly awaiting their new music but I’m disappointed to report that it fell flat for me. Maybe it was my expectations but they lacked the excitement I remember of them so fondly. I just didn’t feel it. And I wanted to. So badly. The heady combination of booze and bands had me hungry leading me to review number three:

Notes: Sorry guys – I’m sure your kitchen is stunning but you can’t set up shop next to Deans Diner with their burgers and not expect some pissed punters to stray. While Peter Avard of The Mountains fame was downstairs playing his guitar, I joined the steadily growing crowd all waiting for Flowertruck to start. When they finally walked out on stage I was surprised at how young they were. Their set was fun and energetic and a great sending off for what was a great Sunday afternoon.

Despite my personal disappointment in The Maladies and the under developed stylings of Prints, across the entire night there has been a resounding promise of future potential and current quality across the line-up. To take this whole “review” thing a bit further I think its best I not only review the night as a whole but also hand out some awards.

Best Hair Award: The security guard at the door to the band room

Notes: You look like a mixture of Omar Rodriguez-Lopez from Mars Volta and the cookie monster and I salute you! Notes: It was amazing to see a middle age sax player the band met off the street a week prior and Andy Golledge come up on stage to join Good Counsel for a massive sing along of their song Mary (photo above).

Notes: Which I then picked up and drank. Rookie error boys. Sort your shit out!

Funniest Moment Award: The interactions between the leaving Maladies fanbase and the arriving Flowertruck fan base.

Notes: With about 20 years age gap between the two groups neither knew what to make of the other and it was hilarious to watch!

I think the night as a whole could be summed up by words from the opening song of Flowertruck’s set “All the flowers grow/ It’s so beautiful”. It is and it was places like The Hopetoun that proved to facilitate that growth all those years ago. It might have been assisted by the presence of some old Hopetoun stalwarts (Richie Cuthbert, The Maladies ect.) but there was an energy about NSC on Sunday that made me feel something I hadn’t felt for a while. It was a homely feeling. Not in the bricks and mortar but in the throngs of people, the energy of the stages, the community in attendance. It felt like Indie music might have a home again. Time will tell but I’m optimistic about the venue and the way it’s being run. I eagerly await the 2nd birthday.

Notes: Thanks for reading x