NUX may just have made the best space echo recreation: the NDD-7 Tape Echo -
Skip to content
[gtranslate]
H 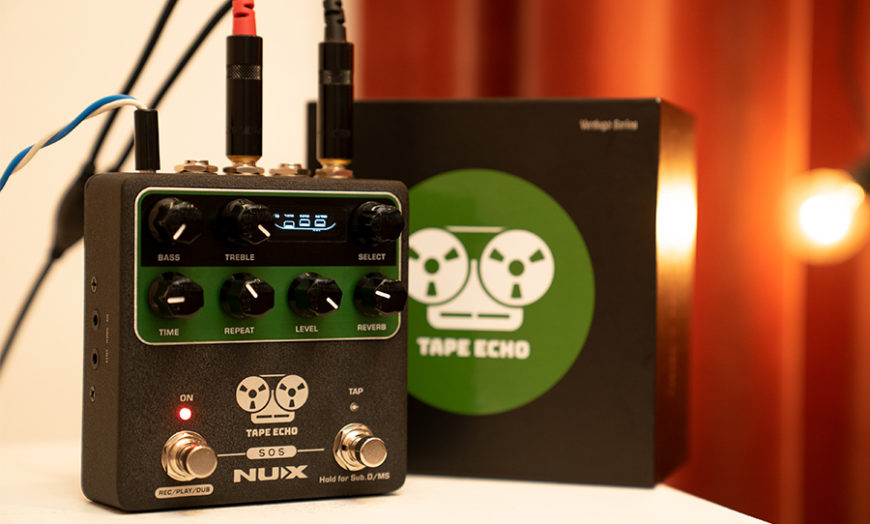 Recreations of the infamous Space Echo are countless. Music company NUX has theirs, the NDD-7 Tape Echo Emulator. We took it for a test drive.

NUX is a music company that makes an insanely wide range of musical instruments, amplifiers, effects and pedals. They’ve tried their hand at the enigma that is the Tape Echo.

The NDD-7 Tape Echo Emulator is a pedal that captures many of the idiosyncrasies of an original (and now incredibly expensive) tape unit, minus the maintenance and wrangling, and with the addition of midi control for ease of integrating into the modern studio setup or pedal board. From the musique concrète experimentation of Karlheinz Stockhausen and Pierre Schaffer to the defining sounds of Memphis’ Sun Studios, tape manipulation and echo has played an enormous role in shaping the very sound of recording and popular music.

Through the loop experimentation of the 40s and early 50s, and onward to the slap effects introduced by Sam Phillips to his menagerie of rising stars, tape echo began as an innovative wrangling of a couple of tape machines, eventually seeing its way to commercial standalone units in the 60s and 70s. Units like the Echoplex, Watkins Copicat, the Roland Space Echo, and a whole additional world of amazing, unusual, and unsuccessful versions.

From the dawn of the 70s, analog technological innovations began to signal the demise of tape in both studio and effect uses with the introduction of the bucket brigade chip, itself eventually superseded by digital technology with digital delay in the late 70s, finding its way into guitar pedals in the mid 1980s.

With these innovations there now was a way to echo and delay a sound without relying on the unpredictable medium of tape. No more tangles, no more bad splices, and no more dirty tape heads to contend with.

However, there seemed to be something in these idiosyncrasies that continued to attract interest from artists and producers. Was it a throwback to nostalgic tones, a love of non-linear sounds, or something greater? Whatever it was, popularity for digital tape echo emulators has ascended. The NDD-7 Tape Echo has all the features and controls of the primo, late era RE-555 Space Echo in a small footprint enclosure. This includes Bass and Treble control, Time (rate) and Repeat (intensity) Echo control, Echo level and spring reverb emulation, along with stereo output, 7 selectable tape head combinations and sound on sound looping capabilities.

In addition to these ‘classic’ features the NDD-7 features a Tap tempo — with times up to 1600s — and control over some of the more interesting tape lineaments via holding down the Select knob. These include Saturation, Wow, Flutter, Killing the dry signal, re-routing the reverb, (through the echo, vice versa, or keeping them separate), along with MIDI control and expression pedal options, and the option to hold down the On footswitch to trigger the unit into oscillating feedback. The small OLED screen handily displays echo times (displayed in either beat division or ms by holding the Tap footswitch) over the top of an animated tape running at speed over selected combination of tape heads currently engaged. Holding both foot switches enters the Sound on Sound/Looper mode, allowing 40 seconds of sample time with the display showing loop time and easily cyclable between Record, Overdub, and Play modes via the On footswitch.

Sound wise, the NDD-7 is a viable contender in the tape echo emulation game. The features are familiar, the idiosyncrasies of tape are captured and completely controllable, and the spring reverb emulation, usually a weak point in digital versions, is fairly accurate and highly usable.

Echo times range from a super fast 18ms slap to a ridiculously long 1600ms, and with the Repeat control cranked the pedal gets pushed into self-oscillation which, in classic echo unit style, can be manipulated beautifully into broken up, saturated chaos by tweaking the Time knob.

The pedal is also buffered, meaning that your echos will continue to ring, even after disengaging the unit. Perfect for your next dub project. And with a USB C connection updating the firmware for new company features is a thankfully simple task.

The NDD-7 Tape Echo retails at $349 AUD. For more details head over to Nuxefx.com.