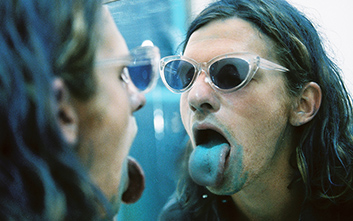 With their debut EP to be released in March, new players on the scene The Jim Mitchells are dabbling with delinquency in their latest single Planet Absorbed. Recently signed with independent Sydney label Third Eye Stimuli Records, this fat jam marks the first title taste from the debut EP for the boisterous act. Creative product of Perth-originated protagonist Jim Mitchell, the now Sydney-based band has been recording some “slippery gypsy folk rock” for your sensory satisfaction, and Planet Absorbed will have you shaking in your boots. Sometimes delinquency is the key to being free. Not only do The Jim Mitchells sound completely unhindered on Planet Absorbed. They sound like they’re having a fucking good time.

The sweltering guitar battle with an atypical harmonica backdrop comes together in one psych-infused ruckus of epic proportions. You can associate this track as an anthem for teenage delinquents or a youth riot. The unexpected insertion of the harmonica gives the ordinarily garage rage a perplexing wave of Australiana sound associations – one cannot help but feel some Paul Kelly nostalgia, which seems effectively bizarre given the garage ethos overtones, yet pays respect to the diverse melodic range of the multi-instrumentalist Jim Mitchell.

This red-hot tune encourages one to break paraphernalia and engage in pre-marital fornication amongst other rebellious acts that would displease older generations – the Zephyr boys would have given this one a good jam.

It isn’t surprising that Mitchell’s musical influences refer back to the classics with The Doors and The Beatles (a listen of Mitchell’s cover of  Twist and Shout on Soundcloud is a must), with Ty Segall taking the prize as Mitchell’s present day visionary: “Hearing Ty Segall for the first time was definitely a revelation for me,” says Mitchell.

Like the rest of Mitchell’s humble collection of tunes (demos and covers mostly), Planet Absorbed was partially recorded in his bedroom which can be credited for the reverberating thickness in sound quality that in some way makes the single that much more authentic. It’s noise, but noise that simply cannot be discounted without the immediate desire to stir up a chaotic social storm, which makes sense when you understand what Planet Absorbed is preaching: “I guess the song is about perspective and the idea of being unable to see a situation from someone else’s point of view, especially when social agendas and egos are in the way. It’s also a song that I wrote in my room so I could say things that I couldn’t at the time.”

Best experienced with your hair down and a messy mentality, this infectious track makes sweating seem appealing which pays respect to the mastermind Mitchell for his deliciously dirty rendezvous with rock.

The Jim Mitchells are playing a single launch at Freda’s in Chippendale on the 25th of February, so if you’re too hip to be square or too square to be hip, be there for a sweaty night of blistering garage ricochets.

The band’s EP is to be released in March via Third Eye Stimuli Records. You can catch the band in the flesh later this month.