Salem Ilese, 22, has teamed with Pussy Riot’s Nadya Tolokonnikova for her new song Crypto Boy, which is raising money for the Center for Reproductive Rights.

For Salem Ilese, the Los Angeles based singer/songwriter, a graduate of Boston’s Berklee College of Music, has been seemingly unstoppable. After going from relatively unknown to accumulating well over 1 billion streams, she’s returned with a new single, Crypto Boy.

The artist, originally from San Francisco, had already written the song she felt would be a suitable follow-up to the breakout hit, Mad at Disney, when she reached out to Tolokonnikova of Pussy Riot to make the most impact. 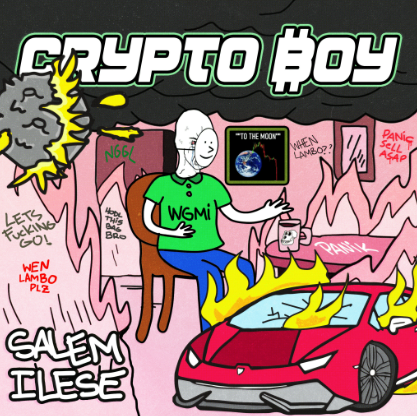 To add a level of irony and initiative, Salem and Nadya released an NFT with the single drop to raise money for an incredible cause that will help Americans access safe abortions.

Thanks to this collaboration and ingenuity, the money raised from the drop on Sound XYZ, totalled $169,410 USD ($235,857.68 AUD), in just 24 hours. Every cent went to the Center for Reproductive Rights.

To put it simply, the gals pointed out how the recent attack on reproductive rights as the potential overturning of Roe v Wade was discovered is something we should all be talking about, as loudly as crypto boys talk about NFTs.

Speaking on Crypto Boy, Ilese wrote: “‘Crypto ₿oy’ is a wake-up call for all the chart-watchers, candle-counters, and JPEG-flippers that find a way to bring crypto into any conversation, no matter what it’s about. We all know them — checking OpenSea like it’s Instagram, obsessing over prices, holding this, shorting that and being unable to focus on anything except Discord.”

The song itself is a return to what Ilese’s audience has been wanting and what the artist knows best. While short at 2:20, it provides enough colour and drive for any listener. What differentiates it, though, is both the energy and force behind the words and how it’s juxtaposed with their innocence. Given its subject matter, it’s clear it was written recently – referencing to crypto and NFTs, respectively – but there’s easily the sound of a decade or two past. The guitar is something that grounds the song wonderfully and the beat provides the constant energy.

It’s certainly a stadium hit; I can already imagine a crowd’s fists in the air while they chant the chorus. However, while the song has this potential, the pursuit to help others and cause a change is something special in an artist who’s relatively young. Giving back to those less fortunate isn’t just a lovely thing to do but can inspire others to do the same.

While Salem Ilese talks about not caring about your crypto, it’s clear her intentions to help are sincere and earnest.

Listen to the song below: