It’s been dubbed one of the greatest, if not the greatest animated show of all time, thanks to the witty writing, hilarious plots and on point execution by the cast members. Anyone who has grown up watching The Simpsons share a bond that anyone who didn’t won’t understand. Quote any classic line, and if someone can finish that sentence for you you know you have a new best mate. Proving that once again the internet is a wonderful place, there is now an online generator that will match any quote from The Simpsons with the image from where it was said. No really, this is a thing, and we’re all better off for it.

Frinkiac, named after the dubious scientist on the show Professor Frink, is a generator that features 3 millions stills from the show’s first 15 seasons. All you have to do is type in a quote, and the corresponding image will come up, complete with the episode and season number, as well as the exact minute the line appears in the episode. Then you can create your own meme, complete with Simpsons type face.

The website wasn’t actually created by Professor Frink, but is the work of Sean Schulte, Paul Kehrer, and Allie Young. Speaking to WIRED Schulte said “We had the idea several years ago when we were quoting The Simpsons at each other all day long, and it was surprisingly difficult to find an image of the scenes we were quoting on Google.” The trio began the project six months ago, and they soon made short work of what is clearly THE BEST THING ON THE INTERNET SINCE KEYBOARD CAT.

Here are some choice scenes we picked while trying to avoid actual work this morning. 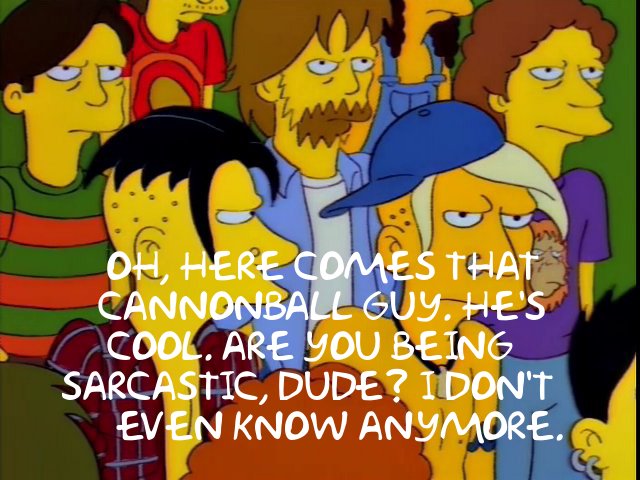